Note: The volumes are in pairs, which is why the chapter numbers reset every 2 volumes Less... 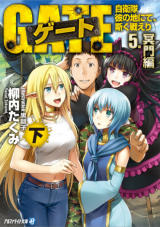 If you have read the manga, then put this series on "hold"
by Jandalman
December 30th, 2015, 2:42am
Rating: 7.0  / 10.0
First of all boy am I glad this is finally getting translated. But even with the speedy pace of translations it's gonna be a looong while until it catches up to the story from the scanlated manga chapters. If you haven't read the manga yet and don't intend to then go ahead and read this, it's the original source material after all. But if you've already read the manga than this is just a replay of the early chapters without the pretty art and a shitload of political exposition inserted at random that will bore you to tears.

Waiting list
by jrwoodwa
December 18th, 2015, 2:35pm
Rating: N/A
Hey, I've read the manga up until the most recent update... I've also seen the anime too. The only thing is I am waiting until the story releases up until/or past the manga. Then I will read it all in one go and savor it.
Was this comment useful?  Yes

Undecided, if I want to start this series...
by Johann Krauzer II
December 18th, 2015, 12:57pm
Rating: N/A
Is this a different take on the scenario of "Outbreak Company"? There (so far) only japan knows, and has some light hearted approaches and many Otaku-Culture references, but a serious undertone. I haven't read this yet, but can those who did tell me if this is similar or more serious?
Was this comment useful?  Yes

Interesting story, yet not the best version
by Sosseres
December 15th, 2015, 4:07pm
Rating: 8.0  / 10.0
I have just finished reading the translation of the first volume of the Light Novel by Skythewood. The story is good, characters are funny and somewhat relatable.

The biggest downside to the work is in the pacing. It bogs down in details in some places while skipping huge stretches in other. Secondly the writing itself isn't the best, connected to the first point. A high action scene has the normal sentence structure and word choices, not imparting the frenzy in how one reads it.

Overall it is very good, I just feel the manga patches up the pacing a bit and thus handled the first volume best.
Was this comment useful?  Yes

There is two different version of this novel
by aznluck
December 2nd, 2015, 7:01pm
Rating: N/A
Have not read this yet until more chapter is translated, but I am reading the manga version. I know there are differences in manga, LN, and anime version (have not watch the anime yet either).