Nozomi Aizawa has has kept her feelings for her schoolmate Azuma-kun a secret for quite a while, but the time has come for her to finally confess. His response, though, is far from ordinary! Led in circles by his hilarious tangents, these two awkward teenagers find themselves growing ever closer while muddling through misunderstandings and off-topic rants. When the airheaded stalker Aizawa-san finally connects with the petulant know-it-all Azuma-kun, the result is a romantic comedy worth talking about!

Nozomi Aizawa has has kept her feelings for her schoolmate Azuma-kun a secret for quite a while, but the time has come for her to finally confess. His response, though, is far from ordinary! Led in circles by his hilarious tangents, these two awkward teenagers find themselves growing ever closer while muddling through misunderstandings and off-topic rants. When the airheaded stalker Aizawa-san finally connects with the petulant know-it-all Azuma-kun, the result is a romantic comedy worth talking about!

Nominated for the Best Shoujo Manga of the 44th Kodansha Manga Awards in 2020. Less... 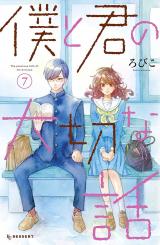 Had a good premise
by hellooowwww
January 4th, 2022, 12:32pm
Rating: 7.5  / 10.0
The story started off with interesting leads and a unique start. The male lead was unlikeable imo with his misogynistic ideals, but he later got development. The main issue I had was with the female lead. In the beginning of the story, she is shown to be a relatable character with strong ideas(her reactions towards the male lead's ideals) but as the story went on she just seemed to be obsessed with the male lead. I'm not a fan of the stalker trope so that could be a factor on why I dislike the female lead, but I think the story would have been better if she wasn't a stalker. She also had no motivations or goals in life other than to be with the male lead. As the story went on, she just seemed to be the perfect nice girl with no flaws(other than the stalking). I also found the side characters to be more interesting than the main characters. I wish the author could have explored more of the side couples. The reason I rated it so high was because of the gorgeous art and the relationship between the mains. The two were a hart warming couple and it was fun to see the development between the two.
Was this comment useful?  Yes

It could have been awesome
by Idonotcare
July 28th, 2021, 9:13pm
Rating: 6.5  / 10.0
I LOVE how this started with a superficial confession that thankfully failed for the MC to realize she was idealizing her crush. This leaded them to DEVELOPE their relationship first, you know, get to know each other, enjoy their company, seek for moments to be alone just chatting. The premise was absolutely original.
BUT...
The author turns the story into a more generic one with other characters and their love lives, which I didn't mind, but they promised much more than what we had.
The MAIN problem I found by the middle of the story is the protagonist herself. She doesn't feel so down-to-Earth when her only concern is to be with the boy she likes. You got all these other characters with their hobbies, personal dilemas (like the girl in love with her teacher; her best friend, a loner; even the male lead who wants to be a writer) and then you have her, who doesn't have a single problem in her life because she's CRAZY popular and out-going, therefore, doesn't have a single person who dislikes her and can easily blend in any group of people, still standing out from the rest. It feels like she turns into a Mary Sue with no problems whatsoever and that makes her less likeable because she doesn't have any conflict or obstacle that prevents her from being with the guy she likes. So that's when the story gets boring and the rest of characters don't apport anything substancial to the plot or make it more interesting. A shame, since they had a little charisma and could had offered something new and refreshing to the formula.

Adorable
by Pandoreye
July 20th, 2021, 8:57pm
Rating: 8.0  / 10.0
It starts off like an episodic gag manga where everyone just sits on a bench talking. I thought they would never leave the bench. (Mini spoiler: the entire story does not take place on one bench. I was worried it would so I was glad it didn't...it takes place on multiple benches!! Okay, I'm kidding. No, I'm not kidding, but they do change scenery.)

Then it introduces likeable humorous characters. (I will NEVER forget Tamaki's hair - especially when he got the point. I DIED every time he popped into a panel.)

Then the plot actually develops. It was heart attack cute. I really liked the main relationship in this. It was wonderful. The art was also really good. I liked this manga a lot.

I think the great thing about this manga is that you don’t just fall in love with the main characters’ story but the entire cast of characters. I read the story in one sitting and by the end of it, I was left with this warmth I hadn’t felt beforehand. I can understand some of the bad reviews but I honestly think this is a manga worth reading!
Was this comment useful?  Yes

Edit: That was a beautiful ending. To me, this series is a 10/10
The humor in this manga is great, all the characters are lovable and there relationship growth between the soon to be main couple. I just find this whole series cute.
If you enjoy comedy, silly characters and romance then you should read this series. However if any of these genres aren’t your cup of tea, don’t read this because you won’t enjoy it

Herbivores are danger
by agartha
April 26th, 2019, 5:07pm
Rating: 7.0  / 10.0
Started a bit slow, a bit confusing, and a bit condescending. But still cute. As frustrating as it is that there is no substantial progress and chapters are pretty episodic, I think the pace is within a realm of reality when considering both mc's personalities, though in all honesty I find them a bit flat but their interactions are cute so still readable if you want something super casual.

This looks like one of a better ones(although I'm not reading much of a shoujou genre, so there's that).
Was this comment useful?  Yes

All characters are quite straightforward
by PhieX
August 16th, 2017, 9:34pm
Rating: N/A
Some earliest chapters maybe have little impact on how this story goes, stagnant, or it seems no storyline yet, as it shows two people were having a conversations in the same place . It's quite peaceful, kind of boring, and charming at the same time (imo).
As I have stated on the subject title, what's make it charming is how straightforward are some characters in this manga. They're honest to their thoughts about simple things. This trait is rare in shoujo realm. The progress is slow, but there's character development for sure. And because this is shoujo, the progress will be a love rival which will clear in later volume (3 or so).
The drawing is good, as expected of Robico, and there's some differences on how one character drawn to others. The background is good too.
I'm so looking forward with this manga, because there's some cuteness between the main couple.
Was this comment useful?  Yes

Nice strory
by Meeevan
January 30th, 2017, 10:22pm
Rating: 10.0  / 10.0
The story said the truth of the reality. How boy difficult to understand what girl want and how a girl being so nervous and clumsy when she meet her crush. So ealistic, sweer and cute. I love it ❤❤
Was this comment useful?  Yes

A fluffy read
by residentgrigo
February 14th, 2016, 1:46pm
Rating: 6.0  / 10.0
The writer doesn´t have me excited but this one started well. The as of now episodic setup fits the sitcom tropes, the characters have good comedic chemistry and the story is moving along faster than expected.
But northing progressed by the time of vol.3 and stagnation set in, so i am out.