Login to add items to your list, keep track of your progress, and rate series!
Description
Official English: INKR

Taiga, a teenage girl with a complex about her aggressive nature, has just moved to Tokyo when she runs across a boy passed out from starvation. She lends him a drink, but he ends up stealing a kiss! Then, on her first day at her new school, that boy, Anri Iseya, comes up to her and declares himself to be her pet?! This dangerous mission between a black beast and a strong-willed 16-year-old begins now! 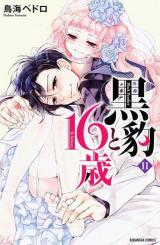 Kimi wa Pet and Hana Yori Dango had a baby
by mispelling
December 29th, 2021, 9:54am
Rating: 6.0  / 10.0
This series is weird! I can’t really decide if I like or dislike it. The art is really amazing so pretty but the plot leaves a lot to be desired. Legit there’s not much development until halfway into the series. The characters are pretty shallow in terms of development, all of them are just rich people bored af. I liked the second male lead more but he only existed to cause a love triangle in the beginning, it sucks since he treats FMC way better and actually has her consent most of the time. The smut scenes are very spicy and very pretty drawn. Some of the plot lines like her “losing weight” is actually fantasy and so over the top it isn’t believable. It’s got all the standard harem shoujo tropes.
Was this comment useful?  Yes

Big breasted female lead and hot dudes galore.
by Shellshock
May 29th, 2021, 2:56am
Rating: 7.0  / 10.0
The manga is about a girl who moves to the city and starts her first year as a high school student. Her dream? To have a gorgeous romance with a pretty boy! However things go very wrong when the male lead shows up and demands that he become her pet. Due to various circumstances she agrees but this causes tension inside especially since she's in love with none other than the male leads best friend.

Now the Male lead as his bestie are 2 of the 4 hotties in the school. The 4 basically control everything since there families control everything and shit. If this sounds familiar thats because this has the same plot as Boys over flowers. Which is considered a classic. However this series is actually better than the original. Mainly because of the personalities of the main characters. They are far better. The male leads in both of the series are.... questionable but still.

This series is mainly the love triangle between the 3 characters. The bestie, The FMC and the male lead. You can tell the male lead is the male lead by showing him having massive mommy issues. Male leads can't have decent parents in a shoujo otherwise the author has to actually think up of an original reason for the MMC to act like the way he does. Too much effort i presume.

Despite my complaints to the series. I did enjoy the manga. A lot of it is because of the presentation of this series. If you have read Demon Prince of the Momochi house you know what I'm talking about. The problem with that series is that its too confusing and random but the presentation is top notch. The case is similar except the story is much more mundane and simplistic. But i still enjoyed it. Why? **PRESENTATION**

For real the art and the characters faces is what carried this series. The series is labeled and for good reason. Though there is no sex the build up to the romantic moments the actual kiss scenes are very dramatic and saucy. They have the intended effect. Its not just the kiss scenes. The romantic tension of characters is astounding. More with the Bestie and FMC but the FMC and MMC are pretty good too. One of the common themes is the female lead feeding her pet who is the male lead. Its done incredibly well. The sudden shift in tone isn't really jarring and the serious faces and the actual feeding is very fun to look at.

The FMC was also in a relationship before and part of the series is about her growing up as a person. She tends to speak her mind which results in her being somewhat ostracized. What i liked about the series is that her ex isn't a bad person... Like he literally a normal guy. The reason they broke up was because it was the female leads fault and she tries to grow from it. That actually took me by surprise a little. Her character development makes more sense. This is probably one of the better parts of the series. Even if it is a very minute part of it.

Like i mentioned before the series is very simplistic, you can pretty much see the ending from volumes before the ending. I have to say i was underwhelmed. This is not how i wanted the manga to end. But what can you do.

The series also takes too long to handle the Male leads family problems. You know why he wants to be treated as a pet and all that other shit. It hawt, but you know still kinda weird. I think in regards to family drama the presentation is still good. As far as writing goes it lacks depth for me to actually give a shit, but at least it looks cool.

The side characters and there romances were basically in the background and didn't really take any space except for like gags and stuff. Which i guess was fine. If you can't write something entertaining, just make it a gag. A very popular series does this and it worked out for it.

The romance triangle was enjoyable and a very fun read overall. I liked watching it all unfold. Watched some of the characters break down in the name of love. Despite all 3 making me go through a hurricane of emotions. I think the bestie is my favorite one. He's the type that looks scary but is soft hearted. His part of the story definitely gets me.

TLDR: I think with a bolder, more memorable story this could've been a classic. But if you give this manga a chance, you'll find a lot to love with Black Panther and Sweet 16. 7/10

This Was Alright
by Pandoreye
April 6th, 2021, 8:17pm
Rating: 6.0  / 10.0
I thought that this was alright. I didn't really love the characters or the plot, but I did enjoy myself while reading it. The art was pretty though. And I did think that the love triangle in this one was really well done - it was hard to choose.

There's just something about this manga...
by firewolf19
August 6th, 2018, 8:35am
Rating: 9.0  / 10.0
...that keeps me coming back for more. I'll be frank: this manga is really not that great by typical standards. The not-so-prominent plot doesn't make a whole lotta sense (though in volume 7 it does get better) and the characters don't get any real development until further into the series. The relationships between most of the main characters are also quite unrealistic, which you can probably figure out based on the premise of Anri becoming Taiga's "pet."

However, while I can objectively look at this series and say it's really not that great, I still LOVE it. The reason I read this is because of the weird and sexually tense relationship between Anri and Taiga (and I guess we can throw Kurogane in there too, since he plays an important role). Anri is the enigmatic type and you're never sure exactly what he's thinking; he's also possessive and can be a major jerk to his love interest (a common character trope in shojo). But what I find unique about Anri is that he's not 100% bad OR good hearted. One minute he's being selfless and pushing Taiga into Kurogane's arms and the next quite literally trying to steal her away. He can be quite childlike but also wise and cunning. He really is like the titular "black panther" that stalks and toys with his prey. And Taiga, even while pining after Kurogane, is naturally drawn to Anri even though she barely admits it to herself. While I would hate to be in a relationship like that, it's fun to read in a manga. Plus it's made for some great fan-servicey scenes (which, let's be honest, is one of the main reasons to read this series!). On that note, I'd like to point out that even though this is marked as smut, there's only been risque fanservice as of volume 7...which I'm quite all right with because it really builds the tension of their relationship. The art is gorgeous and unique which makes any racey scenes all the better!

So anyways, I won't pretend that this manga is amazing and perfect when it clearly has a lot of issues, but I still love and thoroughly enjoy reading it.
Was this comment useful?  Yes

21st century Hana Yori Dango
by Akatsubaki
February 4th, 2018, 7:25am
Rating: N/A
...with slightly darker/angsty feeling that makes you kyaa.
There are a few parts of the story that I find a little bit lacking or doesn't make much sense, e.g. the mushroom part. But overall it's an entertaining series to read. The highlight of this series is definitely the male protagonist, he is a much more complex individual than what he appears to be.
Was this comment useful?  Yes

Sitting on the fence
by chixon
December 5th, 2015, 11:21am
Rating: 5.0  / 10.0
Giving this one a 5 (for now), because I am not sure if I love it or hate it.
Even with the art. There are times I think it's gorgeous, and times the anatomy looks so contorted that they don't look human. Maybe it's just the style. Either way, I will keep my eye on the series and see which way my opinion goes.
Was this comment useful?  Yes