Login to add items to your list, keep track of your progress, and rate series!
Description
While the title suggests a story of simple, everyday school life, the contents are more the opposite. The setting is a strange school where you may see the principal wrestle a deer or a robot's arm hide a rollcake. However there are still normal stories, like making a card castle or taking a test you didn't study for. The art style is cute but mixes with extreme expressions and action sequences for surprising comedy bits. 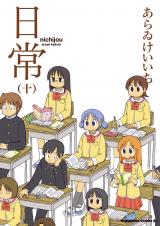 Note: You must be logged in to update information on this page.
Forum Posts Click to view the forum
Nichijou to End in December
over 7 years ago

Probably my favorite anime ever, and certainly one of my favorite manga.
Was this comment useful?  Yes

I can only add one thing. Because a lot of the humor in this story is absurdist, or just visual, in order to get the jokes you have to take in the manga with more attention than you might ordinarily give to manga. The approach to humor taken by this manga worked better for me in the anime, because an anime, with its color, movement, and music, generally grabs and holds the attention better. The Nichijou anime is one of my all-time favorites.

The drawing is great in both, with plenty of charming oddness and cuteness.

One of the best
by himjl
January 12th, 2012, 7:29am
Rating: N/A
Nichijou is an incredible absurdist comedy. The characters are interesting and demonstrate that a manga doesn't need to be lowbrow to be moe. Many of the jokes will make you literally LOL not figuratively. Unfortunately, some people who can only appreciate one kind of banal humor just don't get it.
Was this comment useful?  Yes

Great Laugh
by MatrixM
April 27th, 2011, 11:34pm
Rating: N/A
Haha, this is great. From what's been translated so far, it's like Azumanga Daioh [though i admit i didn't see all of azumanga daioh due to losing it and I saw it 5/6 years ago when i was in grade 5/6] but not quite as good as i remember the latter being. The absurdism is even better than the regular comedy, with a elementary school mad scientist and a wrestling match between the principal and a deer.
Was this comment useful?  Yes

I believe it's supposed to be a comedy, though there isn't much comedy there.The art is very lacking, and there's no evident cuteness that I can make out. The gimmicks are dull and retarded and before the end of the day you may pass out from the hole this series leaves in your brain. If you don't die from the cold lame jokes anyways.

So there I was on the shitter, reading this piece of crap and I thought to myself, "Eh, why not?" So here it is."
Was this comment useful?  Yes

Good start, and "selemat pagi semua"
by Zer0on1
September 26th, 2009, 6:41pm
Rating: 8.0  / 10.0
well, its a nice comedy for starters. I like to read more of this. Anyway, i kinda felt honored that some of them knew some Malay words (national language of Malaysia), I'll teach them if they let me do so. Heheh.