Login to add items to your list, keep track of your progress, and rate series!
Description
February 23rd, 20XX.
Looking for a job in the famous TV station at Odaiba, college senior Jin Mishima attended the recruitment orientation. Not far away from the station, Nanako Okano, a gothic lolita trying to attend a concert, found out that her friends tricked her about the concert ticket because of jealousy. The two bumped into each other and "reunited" -- they were junior high classmates -- moments before an earthquake of Richter Scale 8.1 turned the island (the entire city, in fact) into ruins. 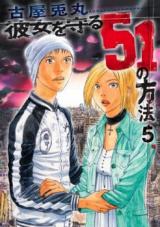 Note: You must be logged in to update information on this page.
Forum Posts Click to view the forum
title?
over 7 years ago
spoliers!
over 12 years ago

Well researched survival manga
by Theoneyedsnake
August 10th, 2020, 9:52am
Rating: 8.0  / 10.0
This manga is surprisingly well written and researched. The story was pretty good, along with the characters. It depicted the darkness and mental stresses that would occur during natural disasters very well. Overall, the story was good.
Was this comment useful?  Yes

Top-Quality Disaster-Survival Manga
by cecropiamoth
June 29th, 2016, 9:01am
Rating: 10.0  / 10.0
It's been months since I read this, but I still can't forget it. It has five things that have been staples of a certain kind of science fiction for many decades:

Disaster and a subsequent struggle to survive;
The Inevitable attendant suffering, some of it grotesquely impactful;
An everyday guy forced to become a hero;
Love in the ruins;
And, above all, relentless suspense.

Regarding the suspense, I remember that I had to force myself to put this down every few chapters so as not to end up reading it too fast and missing all the pleasure this great story had to give.

(For the reader who disliked this story because it had rape in it, be aware that human nature is such that just about every time social order thoroughly breaks down, and so some men feel they can get away with it, there will be rapes. It's sad but true. Anyone telling a story of such a breakdown has to put them in to be realistic.)

I'm impressed by how realistic this is
by moonmystery
November 28th, 2014, 6:13pm
Rating: 10.0  / 10.0
This manga was very good. I liked the theme of humanity's simultaneous tenatiousness and insanity... and the part about the new mother really struck me right at the heart. That was beautifully done.

There was no random supernatural elements to this story, and everything was deeply rooted in the reality following a disaster in an urban city. Riots, deaths, hopelessness, hope, and desperate desire for survival---everything was depicted as realistically as possible.

Love this one a lot. I was expecting something more fantastical due to the main girl's get up, but it was all rooted in reality. <3

caution
by Silvergoku
May 23rd, 2014, 7:50pm
Rating: 9.0  / 10.0
The manga was done really well, the story was above average and the art was excellent for the style used. Starts really good, then it gets a very dark and honestly I didn't look at all the tags and I did not expect for there to be rape in it which is my own fault but if your able to overcome that then it gets better. To summarize the manga starts at the day of the incident and goes a good distance into the future so no worries about it ending half-assed.
Spoiler (mouse over to view)
(in the final chapter)
So again my real caution is read the tags so you are prepared what you are getting into. Overall a very good read and will inspire you to think closely about humanity in the face of disaster.

This series is an 8+
by Doomroar
October 7th, 2013, 6:47pm
Rating: 10.0  / 10.0
But in page 1080 in the last chapter in the main room of the protagonist house, there is cameo of a painting by the great master Zdzislaw Beksinski,That! that alone gives this manga a rating waaaaay over 10!

a good survival manga
by whitespade
December 11th, 2011, 2:16pm
Rating: 8.5  / 10.0
the characters are pretty likable, have nice development and by the end they turn to better. the art is appropriate for the theme and the atmosphere. it is informative and quite realistic (though the real earthquake show japanese are relatively calm...). sometimes the pacing is slow but by the end it got exciting and it finish in a good way. a good read.
Was this comment useful?  Yes

Over-all Good
by McCasper
November 13th, 2011, 3:12am
Rating: 5.0  / 10.0
I can't say that this is one of my favorite manga series but its a good read all the same. This series seems like it has been researched heavily but in a situation like this, you can probably make up as much as you want. If I had to decide on a weakness, it would be that the main characters are not very interesting. Still good over-all though.
Was this comment useful?  Yes

Consistently Great
by MatrixM
September 12th, 2011, 2:08am
Rating: 10.0  / 10.0
I only figured out how to work irc on my final try a few months ago so I didn't pick up this series until the day viscans released ch45-48 and I spent the many a hour that day reading from chapter 1 til 48. I can assure you that it is consistently great and had a very satisfying end.
Was this comment useful?  Yes

Quite enlightening
by yui-kun
March 11th, 2011, 8:09am
Rating: N/A
Picked this up about a year ago. This is the very first survival manga that I have read, and it was quite informative. It has a nice touch of realism, and can get you thinking about what might happen if a disaster of this proportion takes place.
It's also scary that there's a massive earthquake and tsunami that hit Japan today. Got me into thinking about this manga again.

Not a bad story, it's a little contrived and apocalyptic, but so are most disaster tales. I'm enjoying it.
Was this comment useful?  Yes