Login to add items to your list, keep track of your progress, and rate series!
Description
Most outcasts are ostracized because they look different, talk different, or live different. But not everyone. And not every previous outcast turns into a revenge machine. After seeing his friend suffer a horrific incident, the once outcast, Kang Haneul, decides to exact revenge with the help of an ability he never knew existed. 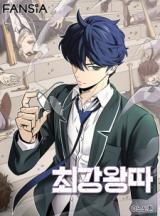 
Author(s)
No Do Hwan


Artist(s)
No Do Hwan

Just awful
by bnad
December 12th, 2020, 6:09am
Rating: 3.0  / 10.0
This is what happened when author just wing his writing without a structure. The story will start decent before it would get worse and worse by each chapter. Too much coincidence (how the heck that high school has so many high level fighter?), people that he know or would face in the competition meeting in his everyday life (Korea is super small apparently), deus ex machina overused, etc etc.

And now add the fact that every characters have a personality that doesn't even resemble a human. Which makes me wonder if the author is a neet that rarely meet people. Every character are parasitic, stupid and just not believable enough that it would break your immersion. Nothing they did in the story make sense.

Even the premise of getting revenge. If you wanna get revenge, going to a fighting competition just because he's on there would be the last thing that you do. Just like if a basketball athlete raped your close friend, your reaction wouldn't be, "I will go to NBA to become the MVP and then I'll get my revenge huahahaha!!!"

Nope. Because that would be weird and moronic

But that exactly what the MC did.

Unexpected ending with clear purpose
by Dunkjoe
April 6th, 2019, 2:09am
Rating: 9.0  / 10.0
Having looked at the other reviews on this site, yea I agree with some of them seeing at what chapter the reviewers stopped reading this manhwa. I agree that quite early on and even midway through the series, there simply are too many disturbing scenes and scenarios, and too little humour. At one point I even started wondering if the manga artist is just sadistic or does he have a warped mind, to think and draw some scenarios.

There are many repetitive scenes, to the point that I got sick of them and wanted to quit halfway. However, the art was definitely very good and depicted the action scenes very well. I appreciate how the artist went out of the way to explain some mechanics of the fighting. It kind of reminds me of Kenichi: The Greatest Disciple, as well as tons loads of other fighting comics out there.

One point this manhwa does much better than most other series out there is that it is very realistic. Realistic to the point where the fantasies of the weaker party staying uninterrupted to the competition is totally destroyed. It is disturbing and unsettling, but with this it becomes a solid series.

The clear purpose of this series is revealed at the end, and to not spoil this series, all I would say is it really is enlightening to read this manhwa. If you can't stand the cringy middle portion of this series, just skip to the last few chapters.

Terrible
by PZcolo
January 11th, 2019, 1:38am
Rating: 2.0  / 10.0
There is so much wrong with this I don't know where to start and most of it has been said already. I wanted to see what happened and how he got his revenge but after 30+ ch. I can't take it anymore and pretty much skimped through the rest of the chapters till the end (and really it was more of the same crap with kidnap, and attempted rape and murder in broad daylight, so no loss) only to have the long awaited fight last half a chapter, this is just a terrible manhua.
I'll skip all about the rape rant 'cause it's been said, JapanRocks and sakirol pretty much sum up several of the worst points, thou I should point out that Seung-Ha's (the girl) situation does come back later, thou certainly not enough. I'll just add that this is full of plot holes, half assed explanations, a very childish and distorted look of society an it makes a very very bad use of the type of cliche I hate the most in manga, the delinquent cliche, it's just so badly use one would think that you can't take one step out the streets at night in Korea or Japan that someone will either beat the crap out of you, steal from you, kidnap you or rape you, and the delinquents rate is supposed to have halved... what a joke. Also, the MC getting magically strong because he takes of his glasses is BS.
Only reason I don't give this a 1 is because the art is not bad, I despise the cartoonish look of the evil guys faces, you can't take a manga seriously like that.
My recommendation, avoid this, if you want to read it, as JapanRocks said, avoid chapters 3-5 and good luck putting up with all the rest of the childish crap, or better still just skip to the end arc from ch62. I'd swear this was written by a 13 year old, if it was written by and adult, the only adult part of him would be his age. If you like this kind of crappy stories just read Holyland, I don't like it but it's the same premise and better executed.

Good Characters and Beginning, Bad Plot Progression
by AmicaNiiya
October 10th, 2017, 9:19am
Rating: N/A
You know that when you're reading something and you really like (most of) the characters, their personality, strong points and flaws, but the story is just so cringy and badly written and you can barely continue reading? That was my experience with this story here. I really like them, especially the MC and his "fighting style" (meaning: being a total wimp with his glasses on but going crazy when he takes them of) I'm into these kind of 180 turn characters, as long as you don't overuse this.
The beginning is good too (not like good for him, but for a story, you know?) but it quickly deteriorates into a stereotypical martial arts comic, a bad one at that
I would be totally in for an AU with a better story, anyone?
(English isn't my native language, so I hope I didn't make too many mistakes)
Was this comment useful?  Yes

Author is trying to make up for his mistakes...
by superbuzz1
April 26th, 2017, 1:59pm
Rating: N/A
I think the rape tag should be removed now because of the recent chapter. Author probably realized his mistake with that decision and created a convenient way to brush it off but it was probably too late at 40 chapters in. Still interested in reading it though. The art is good and really detailed. Writing's just a bit wonky at times.
Was this comment useful?  Yes

...This is not good
by DakOZero
February 4th, 2017, 11:03pm
Rating: 1.0  / 10.0
So uh... The first few chapters had a good start but then later on it just really shit. You would think just by reading the first chapter that this would be good, but no it drives us to big fat bullshit later on.
Was this comment useful?  Yes

1. Information dump/Horrible Plot Progression - the plot itself is wonderful but it is not laid out/expressed properly.
2. Overpowering Main Character - not always
3. Cliche - at some points
Was this comment useful?  Yes

What?
by Loki666
October 14th, 2016, 1:09am
Rating: N/A
What the heck happened? Generic characters, webtoons never have great art but this one is below average, horrible plot progression etc. I don't recommend this to anyone, it is a waste of time.

Too soon to rate it so low
by RS456
August 31st, 2016, 9:56am
Rating: N/A
Off course rape is bad and I don't like it especially if involves a main character but unlike most manga that used rape as a plot this seems like it is picking up but slowly. I am going to read a few more chapters before I make a decision on this manga.
Was this comment useful?  Yes