Login to add items to your list, keep track of your progress, and rate series!
Description
From MiiRache:

In the land of Carat, a battle for the queen’s throne and the prince’s hand in marriage is up and coming. Yuni and Melissa are chosen as candidates for the throne and until a winner is determined, the prince remains in a magical sleep. But what does this have to do with Baba Kanon, a simple ninth grader with thoughts of revolutionizing herself? 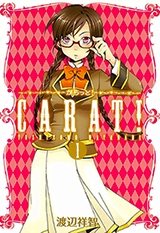 A parody of Shoujo magic girls. Love it.
by moonmystery
June 30th, 2014, 11:02pm
Rating: 7.0  / 10.0
Guys, this manga is not meant to be taken seriously. Instead, read it for the laughs and enjoy the moments as you watch in delight (or horror) as grown men dons these tiny tutu dresses and speak of gaining magical powers.

Udon power is pretty cool. Wish the author expanded on that more.

Not my piece of Cake
by FaithSins
April 21st, 2014, 12:43am
Rating: N/A
It was very much a slap stick manga with its odd moments. The gag moments were out there and just made you wonder what you were reading. I like the characters they were cute just wished the manga had been up to my expectations of that of a magic girl manga. I thought I would see powers spells and a flirty romance but I got the unexpected instead. Its a light read but don't be fooled by the pretty art or summary and be prepared to laugh a lot.
Was this comment useful?  Yes

Rainbow Niku Ramen
by Tenko72
August 28th, 2013, 11:13pm
Rating: N/A
This is one of the most hilarious parody manga I've ever read. They say brevity's the soul of wit and this manga being only two volumes supports that. My favorite parts're the protagonist's reactions -- I wish there were more characters like this in other series -- and her food themed magic.
Was this comment useful?  Yes

Far from being a masterpiece, but funny enough
by themasterwarlord
November 25th, 2012, 2:45pm
Rating: N/A
The premise is very non-typical and the jokes are not bad. The story is kinda bland though. It feels kind of a half-assed plot. Not really something to recommend people, but still good enough for a quick laugh if you have nothing else to read.
Was this comment useful?  Yes

hilarious
by whitespade
August 14th, 2012, 10:20am
Rating: 9.3  / 10.0
this manga is a gem of comedy. one should read this if they like gag manga, and the gender bender portion is done in a good way. i love all the characters, they have good chemistry with each other. great read.
Was this comment useful?  Yes

Funny but it lacks in romance
by hiei_luke
June 13th, 2012, 4:47am
Rating: N/A
Certainly a great choice for a comedy manga, it will certainly tickle you to the bones especially on our protagonist reaction to all the events.. (I certainly felt the same way if the people around me are a bunch of weirdos like that.. LOL)
But on the lack part (which make it 9-rated), it certainly need a bit of romance to spice things up..
Was this comment useful?  Yes

Absurdity and Silliness Know No Bounds
by Here_And_Now
April 30th, 2012, 7:23pm
Rating: N/A
It was cute and funny. Just when you think they won't, they will. From crossdressing to food based magical attacks to yakuza, this manga has it all... and strangely seems to have nothing at the same time. It kept me laughing the whole way through. Will I read it again? No. Would I recommend it to a friend who wants a few good laughs? Yes.
Was this comment useful?  Yes

verry funny
by akane saotome
August 31st, 2011, 7:44am
Rating: N/A
this is the one of the best comedy manga I ever read. I love the end that wos surprise, very nice surprise

I like all chracters no of them wos irritating. I highly recommending this manga
Was this comment useful?  Yes

...
by dreamer00013
May 29th, 2010, 3:52pm
Rating: N/A
you can expect a lot. But pleeease do NOT expect Seriousness. Thank you ^^
It's a very funny, light comedy that (does not) make fun of magical girls. xD The art is absolutely adorable - and suits the whole story perfectly. Don't expect a plot, there isn't really one. But if you want a light, humorous read, go ahead...! (Thankfully it's just two volumes, if it were any longer, it would break its charm... )

PS: It is not gender bender - even if that guy looks like a girl, everybody knows it's boy...

Very Interesting
by cougarpeople
January 7th, 2009, 5:55am
Rating: N/A
Its a really interesting manga. I fell in love with it once I read the first chapter. I'm a bit mixed up with some bits but its funny and enjoyable! I hope more chapters are released