Login to add items to your list, keep track of your progress, and rate series!
Description
Seton Academy, a school full of animals where, thanks to population decline, there are fewer humans than any other creature. Mazama Jin, an animal hater and the only human male in his class, falls in love with Hino Hitomi, the only female human, the moment he lays eyes her. However he soon finds himself entangled with various other creatures after he reluctantly joins the 'pack' of Lanka the wolf, the only other member of her pack.


Status
in Country of Origin
15 Volumes (Complete) (after 6th volume, publisher changed and numeration was reset) 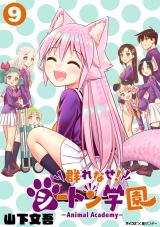 Overall though, the story was a fun slice of life read filled with facts and half-truth facts of various types of animals with good art. However, it did fall a bit short in the end, it didn’t feel like an absolute ending or a well thought of one.
Was this comment useful?  Yes

This is actually something I've never seen in a manga, anime or novel before. There's every kind of animal, be it extinct or not, even neanderthals show up! Dinosaurs are teachers and we can even see previous evolutions act as grandparents(it did happen). There's a lot of interesting, relevant trivia that fits in very well with the story. The males are in the original animal forms(but standing upright), while the females are all more akin to beastmen we're all familiar with.

The thing that made this so awesome is that the author isn't just going the usual route of "oh, they're cute animal girls with some very slight animal traits", oh no, they act exactly like the animal versions are supposed to act like, with some differences of course. We also get trivia to understand why they act like this and it makes it even better. All the characters are therefore quite vibrant and lovable. Be it the mc, the different girls in the mc's group or the other characters they interact with, it's all interesting and fresh, after all, we don't see stuff where people act exactly like animals very often.

The comedy is also pretty spot on, it's well-placed and manages to make me laugh or at the very least smile all the way through. This is partly made sure by the fact that it's not really repetitive at all. New, different animals are introduced all the time and the stories rarely if ever repeat themselves. Usually, I'd see a lot of repetitive patterns in a story like this very quickly, but I don't do so here(well, obviously I can see a lot of patterns to how it's written, but not in a way where it negatively impacts the story whatsoever, there's enough new stuff to make sure that the episodic chapters stays fresh).

We have kangaroos with boxing matches, an impala getting together with a lion, a selfish panda learning to be less selfish(and awakening to her masochistic urges), a koala that can't get enough of poop, a sloth that dies easily when exerting herself, well, you get the deal. It's easy to see that the author is doing his research and loves animals.

Recommended to anyone and everyone who likes animals, some good comedy and want to see something new. I guess the girls are cute as well, so that's a bonus too.
Was this comment useful?  Yes

Deserves Another Shot of Praise
by cecropiamoth
November 7th, 2017, 12:08pm
Rating: 10.0  / 10.0
The series is creative in many, many ways, and, better than that, It's very funny! We have a bunch of semi-human looking animals all going to a high school for such creatures. In fact, there seem to be just 2 humans in the school, the crusty MC and an adorable girl. Unfortunately for him a cute wolf has inducted him into her pack, and seems to slowly be falling in love with him.

There's a wonderful flow of great jokes turning on the pecularities of the animals, and lots of jokes about how the MC gets irritated with the animals. I've never been bored by this even once, and I've laughed out loud a lot.

A super fun animal trivia (lightly) romantic comedy. Highly recommended! It's good!
by Swifft
January 27th, 2017, 6:57pm
Rating: N/A
Basically a tossed up salad of cute animal-eared girls, goofy animal jokes, an adorable main heroine, and a grouchy but humorous main character. It is A-OK and there's no surprise that people quite like it. Wrote a full, but simple review on it. Mostly shows samples of pages and gives you a gist of the series.