Login to add items to your list, keep track of your progress, and rate series!
Description
Vol. 1 - Somehow Nagi Tokieda, a student of a prestigious boarding high school, Ouka Gakkan, is loved by Yuushi Kitou, a perfect sophomore, chosen as a president of the school council though he is still a 2nd year. Nagi is a lonely boy, dumped by his real parents, and is always very sensitive about people's affection to him. Yuushi plans Nagi's birthday party to encourage him. But hearing the news of Nagi's father returning home, he suspends the party. It was a false alert. From shock, Nagi follows some strange students of another school without any definite purpose and gets into danger.

Vol... More...
Vol. 1 - Somehow Nagi Tokieda, a student of a prestigious boarding high school, Ouka Gakkan, is loved by Yuushi Kitou, a perfect sophomore, chosen as a president of the school council though he is still a 2nd year. Nagi is a lonely boy, dumped by his real parents, and is always very sensitive about people's affection to him. Yuushi plans Nagi's birthday party to encourage him. But hearing the news of Nagi's father returning home, he suspends the party. It was a false alert. From shock, Nagi follows some strange students of another school without any definite purpose and gets into danger.

Vol. 2 - Many allies and even more enemies… A scandal breaks out surrounding the tremendously popular, charismatic, and beautiful student council president! Under the scrutinizing and hostile eye of the journalism club’s Katakura, Yuushi’s plans have been recalled. On top of that, Yuushi’s become the target of the ever-capable and ever-cool vice president Takamura’s rabid fans’ jealousy!! How will he respond to their constant criticism?! [from Juné] Less... 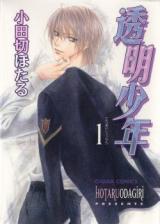 I've read both volumes and I'm hoping that she will continue this! lol. I kinda wanna know if there will be any couples

cause it seems like Yuushi liked Nagi, but then the VP comes in later. O:
Was this comment useful?  Yes

Personally, I look for a bit more boys love in boys love, but it was okay if you just want a light shojo-esque story about friendship love. The mangaka focuses more on what really being a friend means over the physical intimacy of a eros-type relationship.The art was not outstanding, but competently carried out the standard for the genre.

The first story dealt with issues related to abandonment and isolation. It was extremely touching to me only because I personally related to the main character -- so completely that it was scary, right down to the exact question he constantly asked! At times it was a bit overly sentimental, but then again, adolescent and child feelings are very strong!

By the time I was 1/4 into the second volume, I was quickly bored with the new story. I think the only reason the first story appealed to me was because it personally hit home. So, I wonder if the first story would be boring to someone with no personal investment.

Really good. I definitely recommend this manga and i hope you will enjoy it as much as I have:)
by vanillamochi
January 5th, 2010, 11:21pm
Rating: N/A
The art is absolutely beautfiul. The characters are all each their own, and the story behind Nagi really made me cry several times. I was able to really connect with him, living in an enviroment almost similiar to him. It made me flashback on my own memories, nostalogic but very heartbreaking for me. Seeing that he has friends that can understand him made me really happy and raised my hopes that maybe I too, will find real close friends who will also really get to know me. I have alot of friends but none are as close and caring as Nagi's are. Nagi's thinking was very much like mine, but after reading this manga I to have come to realize that their are people beside me who will listen and that I don't have to hold everything in. There are alot of sad main character cliches I have seen in manga, but this is different and quite refreshing. He isn't weak. Some may say he's pathetic, but maybe you don't understand how it feels to grow up.. alone. Thinking about Nagi's story makes me feel stronger, even that feeling just a little bit makes so much the difference to me. I'm only on chapter 2, and there isn't much shounen ai, but you can tell that they aren't very hetero

lol. I like the connections they make, because falling in love sometimes takes a slow pace. Yes, a few times it was hard to tell the difference of some of the side characters, but by chapter 2 I can already distinguish their certain individual personalities, expressions, actions and reactions. I look at the hair and eyes lastly to make sure:3
All in all, i recommend this manga. If you don't make a connection with not even one of the characters or deem this manga bad or worthless, then I apologize. But this is honestly the best lil bit subtle shounen ai-ish manga I have read, and I have read alot.

Not really... but still okay...
by kasumi_yyh07
July 11th, 2008, 10:43pm
Rating: N/A
There really isn't much shonen-ai in this story. I mean, it's obvious that they're attracted to each other, but none of our beautiful bishounen actually got together. The whole hierarchy of the student council was pretty confusing, but the saving grace is the art. Well... Yuushi and Nagi kind of looked like Kazuki and Wataru (otrfk)... It feels that the story is unfinished, that there's more the author could add to it, and actually make it into a complete series. Yeah, I would've liked it better if there were more chapters and story arcs. Coz in a way... nothing got resolved at all... except that Nagi is now open to the other council members...
Was this comment useful?  Yes

Waste of Time
by brid
March 30th, 2008, 4:00am
Rating: 4.0  / 10.0
Toumei Shounen revolves around the totally beautiful, elite members of the student council of an all-boys high school. The main character is the student council president, a guy even more perfect and elite than his subordinates. But the subordinates are no slouches themselves in the desireable category, providing the president ample romantic possibilities. So while the first volume implies a relationship between the president and Nagi (who possibly the most stereotypical uke I've ever encountered), the second volume introduces a possible seme romantic interest instead. (And Nagi completely fades into the background in the meanwhile--which was fine by me as I was uninterested by him.) It looks as though there will be more volumes after the second one, so I can only assume, given the way the series has been handled so far, the later volumes will showcase different student council members (either with the president as a possible romantic interest and/or as part of a side-pairing.)

If this reminds you of the plot of one of your run-of-the-mill BL games, then you've got a good idea of what the manga is like. You've also got a good idea of the depth of both the characterization and the plot of this manga. (For all I know, this might actually BE the manga adaptation of a BL game.) Unfortunately, BL games have a number of advantages over this series. For one, they're are all in color, and this isn't. Having discernable differences in hair color, at least might have helped this manga as the (many) characters all sort of resemble one another and are difficult to tell apart, a problem that is further complicated by a general lack of character development--so you can't really tell most characters apart by either looks OR personality. Even worse, the plot itself is so episodal and thin (I suppose it can be summed by "elite guys who have lots of people who are jealous of them"?) Moreover, it's very chaste shounen-ai, so we don't even get the satisfation of seeing our couples kiss (let alone do anything else--though I don't know if even porn could've saved this one). Overall, the entire time I was reading this, I was seriously wondering why I even bothered--at least with a BL game, you get the satisfaction of choosing for yourself which partner you want for the main character, instead of being unhappy that he didn't go for one of the (many) other possibilities.
Was this comment useful?  Yes

nice review!
by Ishka
June 19th, 2006, 8:19am
Rating: N/A
i love this manga too. it's because of this story that Odagiri-sensei became one of my favorite mangaka. Nagi is such an innocent boy, he's "soft and warm" just like Yuushi said, and that's what makes him somewhat weak. but he's definitely not pathetic (so please don't call him that ^^;;) he's just totally lost confidence that he could ever be loved. but thanks to Yuushi, he's beginning to learn about love, acceptance and self-confidence little by little. :D

great review! i'm looking forward to the next volume too~!
Was this comment useful?  Yes