Login to add items to your list, keep track of your progress, and rate series!
Description
Annoyed by everything and lacking any interest in love whatsoever, manga artist Rui gets an unexpected visit from a built, scary-looking yakuza. After carelessly becoming the guarantor for her friend's loan, she is told to settle his debt of tens of thousands of dollars... "I'll wait for payment. That is, if you let me have sex with you." And just like that, she's pulled into it. "But, I'm a virgin... Am I gonna be okay?" Just as she thinks she's going to be made to suffer, she gets treated kindly and gently, making her first sensual experience all the more confusing...

from Renta!
Official K... More...
Annoyed by everything and lacking any interest in love whatsoever, manga artist Rui gets an unexpected visit from a built, scary-looking yakuza. After carelessly becoming the guarantor for her friend's loan, she is told to settle his debt of tens of thousands of dollars... "I'll wait for payment. That is, if you let me have sex with you." And just like that, she's pulled into it. "But, I'm a virgin... Am I gonna be okay?" Just as she thinks she's going to be made to suffer, she gets treated kindly and gently, making her first sensual experience all the more confusing... 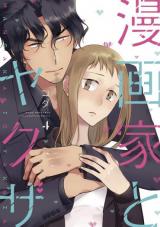 Both of the characters are pretty well written though the ending was kind of abrupt. Good read nonetheless.
Was this comment useful?  Yes

i really enjoyed this one.
by Krnscream
August 31st, 2020, 5:48pm
Rating: 10.0  / 10.0
Fell in love with this manga. The characters are realistic and unique.
Spoiler (mouse over to view)
Some people wouldn't like that he intimidates the main female character into doing what he wants, but she was complicit and didn't hate it. She had the option of paying the debt in full rather than to sleep with him. He said he would never force women to sleep with him.
Also, his character happens to have flaws like every person. He has been doing that to other women, its all he knows, women who want him, his power and his money, but she wouldnt care less about that stuff.

They both lacked communication and relationship skills but then again, he has no clue how to speak to women and she has no experience in romance.

I don't think her as a weak character, if I did, I wouldnt have even read it. The reason she didn't trust him when he said he loved her was because he had so many different partners and he was a yakuza. She assumed he did that normally to all his women. After time, she didnt want to ruin his career rather than just thinking of how he would affect her life.

I love how much she impacted his life.
One of the best I've read that includes smut, mangaka, bad boy, romance, and comedy that wasn't cringey.

Good not great
by sammybunny40
April 10th, 2020, 1:18am
Rating: 8.0  / 10.0
It’s good, shows a plain insecure woman that falls into a scandalous relationship with a yakuza after being tricked into being a guaranteer for her ex’s debt. She never really gains confidence nor changes herself but it’s a quick nice read with a good passable ending.
Was this comment useful?  Yes

Disgusting wasted of time
by YanaseRyoko
December 21st, 2019, 10:14pm
Rating: 1.0  / 10.0
Oh my good. how stories like this are even published? and even get translated while there's others mangas with good plot and good art style that get ignore. This is pathetic, doesn't even worth it.
The girl is a disgusting joke, she likes to beg for love and moves the tail like a freakin dog Oh and the guy.. a total jerk.

Poor Art, crummy characters, non-existent humor
by SleetLightening
May 15th, 2019, 6:24pm
Rating: 2.0  / 10.0
This has great reviews on Renta, but I hated it. Right off the bat the guy threatens the girl with sex slavery if she doesn't sleep with him. He does this even though he knows she's a virgin and that she was pretty much scammed into signing for an acquaintance's debt. He calls her dumb, and plain, and his charming nickname for her is virgin pu**y. His insults are meant to be the comedy it seems. His eventual development of feelings for her seems to be mostly based on the fact that he took her virginity and she hasn't been with another man. She's also not the only woman he's blackmailing for sex. It's made clear that he spends all day most days bed hopping from blackmail victim to blackmail victim. The mangaka is a clueless pushover. She doesn't really have much of a personality. All she cares about is her work, but she doesn't seem passionate about it or anything. It's just the only thing she gives two flips about.
The art is poor, but not the worst thing about it. The dialogue is poor. The smut scenes are boring. There just isn't much to like about it.
Was this comment useful?  Yes

cute & fluffy
by uke-lele
October 20th, 2018, 11:34am
Rating: 7.0  / 10.0
I was on Renta! and accidentally fell into this one. The art style is mediocre and frankly borderline amateur (I've seen doujinshi that's much better), but the storyline and characterisation kept me going. Not that they're particularly great either, but there was something about pairing an insouciant guy with a girl with her head in the clouds and how they foolishly go around in circles trying to navigate their feelings for each other that got to me. The manga brushes across otherwise darker topics easily, including sexual coercion (it is what it is, no matter how it's presented), and it never takes itself seriously.

It's fun, I like it. Some chapters give me heartache and make me squiggly inside, so that's a sign that it's succeeded as a romance manga, despite all its flaws. And that's enough for me. Sometimes this is the kind of reading you need after a long day, something you don't have to think about too hard and you can always come back to once in a while.
Was this comment useful?  Yes