Login to add items to your list, keep track of your progress, and rate series!
Description
Shuko Kodakamine is strong—too strong, by the standards of some. She hopes to make a good high school debut, but that plan goes up in smoke almost immediately when she injures the attractive, charismatic Serizawa-kun...and later suplexes him, to boot! But when Serizawa-kun finds himself in hot water with a jealous boyfriend, it's Shuko who comes to his aid...and he comes up with a ridiculosu proposition: If Shuko becomes his bodyguard, he'll make her the most important girl in his world! (Description from Kodansha USA) 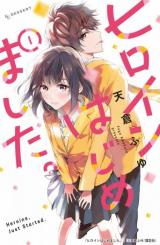 Cute moments and nice art.
by Shellshock
July 1st, 2021, 6:45am
Rating: 6.0  / 10.0
The series is about a tough type of girl. Not exactly a tomboy or a fetishized Muscle girl. But just a girl who was very strong but looks girly as well. She constantly tackles or becomes John Cena when being run into or whatever. Its part of the gag. She ends up meeting this player type male lead. Who basically all the girls like because you know he's good looking and he basically does what the girls want so he's always being surrounded by girls. Realizing how tough the female lead is the male lead basically hangs around her so she can defend him against the onslaught teenage girls whilst he will help her give her the perfect highschool girl life she wants.

Right of the bat you can see where this series is going. The female lead will learn that she is fact super hot. She'll never actually think about her self like this but come on. The male lead will also become less of playboy type and more reserved. Or at least try to be.

There really isn't any conflict about this series. Both of these characters try to help each other and due to there constant influence towards each other they both slowly garner feelings for each other.

The only source of drama is the one of her friends from her childhood shows up but also goes away. I actually kinda like how the author handled his character. Not truly intrusive but still had a presence in the series.

The series isn't really anything special. But i don't think its really aiming to be that. It stays in its lane and does most of the cute moments very well. Its not great but i had fun which isn't really something I can say for a lot of series.

I think the series doesn't do a great job with the role reversal thing. The idea is that she is tough but she gets a lot of the cute girl type moments. Which are adorable but It might as well have been a regular series. I do get why these things happened, she wants to be treated like a girl and the male lead is doing exactly that. But I still wished that there were more role reversal moments not just romantically but comedically too.

The side romances of the other characters were basically shoe horned in as lazily as possible. Like 1 of them didn't even have a resolution unless you get the volume release so there is that. Honestly I expected a lot better than this. I get this is 4 volumes but don't start something if you don't know how to end it either.

Despite these complaints i still enjoyed this series. It's not anything special and I'll forget it by the morning but I still had fun. That's really all that matter