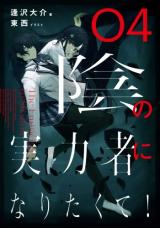 
Category Recommendations
Shijou Saikyou no Daimaou, Murabito A ni Tensei suru
Leadale no Daichi Nite (Novel)
Heroic Tale of the Emperor God Hero's <Ryokou Tan> (Novel)
Once Upon A Time, There Was A Spirit Sword Mountain (Novel)
And So She Dreams of Another World (Novel)

When Chuunibyou Becomes Reality
by Jerberus
April 7th, 2022, 9:15pm
Rating: 7.0  / 10.0
The chuunibyou mc wants to create a shadow guild but can't on Earth. He gets reincarnated in this new world and hones his body. He attacks bandits as a child and frees some girls from their clutches. In the meantime, he experiments on those girls who are about to go through some induced, horrible, magical overload...which makes them revert back to their humanity. He tells them that he's the leader of some kind of shadow guild (that he's made up), saying that they're going against some made-up guild (hint: they're actually real). Grateful to the mc, they agree and join his shadow guild, but he believes that they're just catering to his illusions of grandeur.

He names the girls--Alpha, Beta, Gamma, Delta, Nu (etc.)--after the Greek alphabet. After that, they just become numbers, including (you guessed it, most recently) 666. They go on missions to take down that evil organization. There are even vampires in one book!

I originally thought that I wouldn't like the series, but it's grown on me. He is often found saying cringy stuff that the girls just take in as him being mysterious yet deep af.

Later, his girls use his first-world knowledge to make modern products and cash money (banks, $$). Competitors try to copy them and create their own cash money, and Shadow makes an attempt to bring all of it down (including his girls' fortune *gasp) before building it back up again, just so that he can make some cash.

What makes it not a 10/10...there are too many manga/LN where the mc wants to pretend to be "normal"...barf. That's a lame plot that can put people off this story.