Login to add items to your list, keep track of your progress, and rate series!
Description
Zhou Wei Qing, who was born in the Heavenly Bow Empire without a Power Jewel or Elemental Jewel, was treated as a joke. He is the son of the empire's Admiral Zhou who is a Nine Jeweled Heavenly Jewel Master.
An opportunity arose when he swallowed the Dark Demon Tiger God's Life Bead from another world. From then on, he embarked on a road of adventure, finding true love and finally becoming a Twelve Jeweled Heavenly Jewel Master! 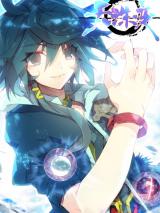