Login to add items to your list, keep track of your progress, and rate series!
Description
Yuu is a high school kid who doesn't really fit anywhere. To find a place he can belong, be accepted, he will do anything. However one thing leads to another and he is forced to fight to keep his place, his holyland. 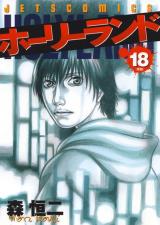 Great Read
by Raiden94
December 13th, 2022, 6:49pm
Rating: 8.0  / 10.0
I enjoyed the read in the beginning for Character growth but it started to get lenghty at the end didn't enjoy it.
Nevertheless it is still a good read.
Was this comment useful?  Yes

Good and bad
by frangelic
December 27th, 2019, 11:22am
Rating: 6.0  / 10.0
It has some great fight scenes and a good sense of a character growing stronger by actually learning things. But at the same time, it follows the extremely tired, extremely shounen trope of "Unbelievable... he's so intuitively good at this thing because he's the main character. His potential is incredible. If he learns to harness this potential... I'm afraid of what might happen. Good thing he's on our side......." I'm not totally against the trope, but in a series going for gritty realism, it feels out of place. Also it gets kind of ridiculous with the mc saying he has nowhere to go if he doesn't get in random fights on the street, when he could literally just go back to his parents' house and go to school and be a normal person. Oh wait, he can't do that because he thinks his parents give him a weird look. He also repeatedly finds himself in a situation where he's about to get thrashed by a mob of thugs and is saved by deus ex machina. It's alright one time, but then it happens multiple times after that. It's entertaining and has some good fight scenes, but it's also dumb and starts to get old after so many chapters. The characters are pretty lacking in personality as well. But the violence is well done and mostly based on real technique, which is cool. Overall I'd rather read Hajime no Ippo if I'm looking for something about an underdog fighter.
Was this comment useful?  Yes

Not too bad!
by Noburo
February 18th, 2019, 4:15pm
Rating: 7.0  / 10.0
I definitely enjoyed this. It can be a little slow at times, but it's worth the read! The ending is a bit disappointing to say the least, but it's an entertaining read up to it. Especially if you like martial arts.

Entertaining read
by Meilee123
November 18th, 2017, 12:17pm
Rating: 9.0  / 10.0
This was gripping, I couldnt stop reading.
I love how I could skip all the martial arts and boxing explanations. Haha. This would be perfect as an introduction to fighting techniques.
I can't give this a 10, though, because the plot was kind of simple. It didn't have much complexity to give me a shock. And yes the characters could have had more depth as well. Although I suspect that that's how Japanese people think.
Spoiler (mouse over to view)
Overall, the plot was to beat your opponent, then your next opponent and so on. It would be predictable if it was any slower paced for me to notice. Also, the ending was kind of predictable as well. I am not a fan of ambiguities in endings. I wish I saw his future.
I feel like you could even write a sequel in the professional world. I would read that.

This one was extremely formulaic and full of cliche

The characters can all be reduced to some few traits that represent them since there wasn't any layers besides the first. You got the weak and introverted main character that hides a great talent, the supportive friend that doesn't do nothing besides support his friend when he's needed, the enemy-at-first but turn-friend-later that is envious of the main character’s strength, the random love interest that is no more than a love interest, and at last the guy that the mc is always following; his ideal.

The story walks in circle and keeps presenting mini-bosses with different fighting styles. There's a lot of infodump and exposure which make you feel like the author wasn't even trying to show what was happening without spelling everything for you.

The last arc is where it throws everything out of the window and get really ridiculous. The situation they find themselves is over-the-topness incarnated, but somehow they resolve the problem with street fighting & friendship.

There's a huge cop-out at the end where some character that we've barely seen before show himself and do something unthinkable, then there's some reflection on "the streets" and a open ending; not that i was bothered by that, it could honestly throw whatever it want that it wouldn't change what i think about it

Good but not.
by GreenToes
April 3rd, 2015, 9:29pm
Rating: 8.2  / 10.0
Amazing read. The art is fantastic and the story development is consistent. However, there are some alarmingly obvious plot holes. We have Izawa, who never gets stronger while Kamishiro gets on this power-up montage. Also, why did none of the characters ever call the cops to fix their problems, especially in the last arc? Overall though, it's really worth the read.
Was this comment useful?  Yes

Stupid final arc.
by MondSemmel
September 16th, 2014, 10:52am
Rating: 8.0  / 10.0
The first ~14v (incl chapter ~138) are pretty amazing, and in contrast to some others I very much enjoyed the description of martial arts tactics, but the penultimate arc and the ending are both pure bullshit.

Spoiler (mouse over to view)
It's a drug war. The bad guy takes over the whole town with his huge team of... three fighters. Meanwhile, our protagonists dick around and let it happen.

Then in v17 Yuu's girlfriend Mai is taken hostage (fair enough) and Yuu reacts by letting himself get hit until he can no longer defend anyone. What is that supposed to accomplish?! Nothing, as anyone could have predicted beforehand. And then, that same scene STILL SOMEHOW TURNS INTO A ONE-ON-ONE FIGHT, and the tone completely changes from utter despair to standard fight, WTF.

Some better solutions: turning it into a hostage exchange (i.e., "release her or I'll kill you") or, better yet, CALLING THE POLICE asdf.

Basically, things go wrong in this arc because the protagonists act like idiots solely for plot reasons. (TV Trope: Idiot Ball) And then there's the insanely inconsistent tone:

Spoiler (mouse over to view)
Drugs are destroying the lives of our friends! Mai was kidnapped! Let's respond with standard 1v1 duels, no permanent or lethal violence, and a friendly talk, standard nonlethal duel and absurdly amicable resolution with the boss responsible for the drug distribution. Yuu, what happened to your desire for revenge?!

And the final volume is no better.

Spoiler (mouse over to view)
Yuu wins vs. Izawa because he's powered up throughout the series while Izawa didn't become stronger at all.
And afterwards Yuu gets stabbed for no reason, and apparently walks away bleeding instead of calling an ambulance with the mobile phone he'd used moments before. And then we get a pointless 3-year timeskip for no reason. What kind of stab wound to the stomach takes three years to heal?

Disappointing
by yoannjuan
August 23rd, 2014, 5:08pm
Rating: 7.0  / 10.0
I had high hopes at the beginning of Holyland, which is more of a shame that it went so wrong after vol.5.
The setting is very original, a bullied guy who goes to the world of the streets at night, in order to find his own place.
This does not, however, work in the long run for the author, as it gets repetitive and the fights gets unimaginative. I was annoyed with the manual of martial arts that the authors peppers in every chapter, it destroyed the dynamic for me.
Also the characters are not very believable, Shin and Mai especially, are just too out of place with Kamishiro.

Work of art!
by chaechaeboi
May 28th, 2014, 8:54am
Rating: 10.0  / 10.0
This story is amazing. Great character development and great supporting characters. The psychologic aspect to it is that you get to see the thoughts of the fighters and the main character which gets deep at times. The psychological part is great alone, but the MMA makes it amazing.
Was this comment useful?  Yes