A Japanese cell phone game called Rabbit Doubt has gone viral in Tokyo. In it, players are rabbits who must do everything in their power to uncover the wolf in rabbit’s clothing before it kills them off. The wolf, a randomly selected player, must use his wiles to create mistrust among the rabbits and knock his adversaries off one by one. When five fans of this game decide to meet offline for fun, the last thing they expect is to lose consciousness and wake up trapped in an abandoned building with a corpse strung up in front of them, a mysterious barcode tattooed on each of ... More...
From Yen Press:

A Japanese cell phone game called Rabbit Doubt has gone viral in Tokyo. In it, players are rabbits who must do everything in their power to uncover the wolf in rabbit’s clothing before it kills them off. The wolf, a randomly selected player, must use his wiles to create mistrust among the rabbits and knock his adversaries off one by one. When five fans of this game decide to meet offline for fun, the last thing they expect is to lose consciousness and wake up trapped in an abandoned building with a corpse strung up in front of them, a mysterious barcode tattooed on each of their bodies. Will the virtual friends be able to pull it together in the real world and figure out what’s going on in time to avoid ending up the wolf’s dinner? Less... 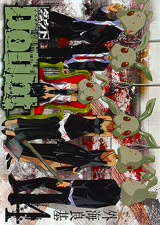 I thought this would be cooler.
by Pandoreye
June 18th, 2021, 10:44pm
Rating: 5.0  / 10.0
The cover and concept had me intrigued, but this was fairly predictable. Also, I didn't care about the outcome because I didn't build an attachment to any of the characters. I was left unimpressed.

So Disappointing..
by moonrein
July 9th, 2019, 10:19am
Rating: 3.0  / 10.0
Since this comes a lot in recommendations for horror manga and it does have a cool premise, I was expecting at least something interesting. But nah. Boring characters (no tension since why would I care if these characters die?), sloppy story pacing, WAY TOO MANY ASS PULLS , especially in that last act.
Spoiler (mouse over to view)
If you're genre-savvy at all or have read at least a few "death game" manga, you know full well who the killer(s) would be. Of course it'd be the "innocent", unassuming character. Not only that, it also did the "First killed character is the surprise killer" trope. I mean, I know this is an old manga but DO SOMETHING NEW JEEZ.

Saw for children
by residentgrigo
November 29th, 2013, 8:02am
Rating: 4.0  / 10.0
This series or the sequel are lame and uninspiring claptrap for kiddies without bite.
As a horror manga this sucks bad. As a story with internal logic(the ending is laughable) it is worse. The art is ok.
All in all a skip. Read Berserk, Parasyte, Gantz and Suicide Island as these are propper dark seinen instead.
A mind game this is not.

Bad Ending II
by yennyenn
August 9th, 2013, 6:51am
Rating: 7.5  / 10.0
Another survival game storyline. I think this is rather similar to Danganronpa (anime). Everyone was being trapped in a building, murders happened and each one has to vote for a murderer. However, this story has a serial killer, whilst Danganronpa is about different people killing someone else. Also, the art in Danganronpa is less gore than this.

Agreed with most of the comments here. Everything was good until the hypnotism came in. Like WHATT!!? You kidding me!? And in the first place, why didn't anyone go to check if Rei (the first victim) was dead? Moreover, the ending has no meaning. Everyone died and another game begins; the cycle continues forever. -.- Having such an ending, everyone kinda became the side characters instead.

Cliché
by clampies
April 22nd, 2013, 1:07pm
Rating: 5.0  / 10.0
This manga should have been great, but it's not. The story is great but the execusion is lacking, it have a lot of plot hole, a lot of cliché and the ending is bad. I could figure who was the wolf at the moment the "game" start.
Note to mangaka who want to do suspense
Spoiler (mouse over to view)
Never make the first person killed the murderer, it have been made a hundred times and it is not a good plot twist.
Was this comment useful?  Yes

Disappointing...
by TisiphoneStar
September 3rd, 2012, 7:18pm
Rating: 6.0  / 10.0
The first 2 volumes were quite suspenseful, though the characters where dry and it was hard to care when they died, but it just went off the deep end after the 3rd volume began. The plot twists were so cliche and it was just plain out bad. Sad, because they could have made it a lot better if they didn't resort to cheap tricks.
Was this comment useful?  Yes

why are you guys so down bout the ending?
by donbu9
August 18th, 2011, 4:03pm
Rating: 8.0  / 10.0
Spoiler (mouse over to view)
what's wrong with hypnotism being involved in the plot anyway? of course, if you live under a rock you wouldnt know that hypnotism is REAL. well, not per se, but the soundwave part in it is proven real! it's called hypnosis therapy and it's bein used in medical science today. albeit not as hardcore as Rei's, the wrong kind of hypnotism/entrancement could still trigger or make a person snap and do weird shit especially if that person is emotionally disturbed. besides the whole process wasnt shown in the manga or how rei was able to manipulate people and how long it took for them to trust her. perhaps in the backstory shes just psyching people out, reverse psychology, brain entrainment, or whatever technique just like in the Cruel Intentions movie (sorry OT). also, it was said pretty clearly that hynotism is NOT magic/psychic, and that not all people can be influenced by it.

imho, the ending was really nice and i was at least thankful that nothing "supernatural" was in the plot. so it's still an intelligent thriller and not some unreal ghost story.

"SAW", the manga
by TRMshadow
July 19th, 2011, 1:15pm
Rating: 7.4  / 10.0
very "Saw"-esque, psychological horror that's definitely worth reading. Sadly it looks like Tonogai-sensei's next work is basically a carbon copy, if this is all he can do I'm going to be extremely disappointed.
Was this comment useful?  Yes

ending was not so great
by twistedshadow850
April 24th, 2011, 8:17pm
Rating: 7.6  / 10.0
The beginning was so awesome filled with suspence and i read through the entire manga in one sitting. But the ending kinda ruined it all. Also, the plot had some major holes in it. *spoiler* for example when mitsuki was killing eiji she was suppose to be locked in the bathroom. and when yuu and hajime went to get hte cellphone from eiji's room, she was behind hte door. and as soon as they got the cellphone and the key on eiji's hand, they unlocked the bathroom to let mitsuki out. but how did mitsuki get back in the bathroom so damn quickly and without yuu and hajime knowing? was it hynotism?
It's a great read for when you are alone at night and want to read something before bed.
but dont get mad at the shitty ending
Was this comment useful?  Yes