Login to add items to your list, keep track of your progress, and rate series!
Description
Shogo Ban, a college student from Fukuoka, likes to cook. Thanks to the owner of the restaurant where he works part-time, he finds himself working at the line of Roppongi's best Italian restaurant, Trattoria Baccanale, and discovers that the real deal isn't quite as easy as he'd thought. The manga follows Ban as he struggles to keep up with the hectic workload and his co-workers, along with issues outside the kitchen like his relationship with his girlfriend Eri, who he left behind in Fukuoka.

Bambino! received the 2008 Shogakukan Manga Award for seinen/general manga along with Takeshi Natsu... More...
Shogo Ban, a college student from Fukuoka, likes to cook. Thanks to the owner of the restaurant where he works part-time, he finds himself working at the line of Roppongi's best Italian restaurant, Trattoria Baccanale, and discovers that the real deal isn't quite as easy as he'd thought. The manga follows Ban as he struggles to keep up with the hectic workload and his co-workers, along with issues outside the kitchen like his relationship with his girlfriend Eri, who he left behind in Fukuoka. 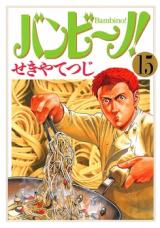 Strong start, disastrous ending
by NazarethSTG
May 18th, 2019, 9:08am
Rating: 6.0  / 10.0
Bambino! starts as a very strong cooking manga,focusing on the inner dynamics of a restaurant, how harsh working conditions are in that field of work, and the everyday tensions that arise from that profession. Having some experience in the kitchens, I can relate to the blazing fast pacing of a high demand weekend. Secondary characters fit quite well in the archetypical personalities you can find working at a restaurant, and are interesting and well constructed.

Unfortunately, as the manga goes on, it starts to move away from this aspect of working in a restaurant kitchen and gets into shounen-ish tropes such as culinary contests in the most ridiculous of situations, and as this first series gets closer to its end, some really terrible deus-exes are used so the protagonist can end up with the girl he wants.

What was once a very promising manga that break out of the usual cooking competition mold becomes just another one of them and loses any kind of plot coherence in the process, which carries on to the awful continuation, Bambino Secondo.
Was this comment useful?  Yes

Good
by nail80
September 21st, 2014, 1:37am
Rating: 8.5  / 10.0
I can't believe I forgot to comment on this the moment I finished it more than 2 years ago!
Bambino! is the restaurant experience. To see Bambi overcome each obstacle and go from a cocky brat to a humble and good cook is a work of pure joy. While he did spend too much time "waitressing" is was a good way to show fully how restaurants work and what is expected of each member of the staff. I think that the main problem with cooking manga nowadays is that characters are too amazed and talk to no end about each and every ingredient as if some absolute masterpiece has been served.
Bambino! does not do this, it keeps on going low key about things and doesn't get too ahead of itself. The kitchen is portrayed as a battlefield, and rightfully so, even if the art gets a little bit overdramatic it showcases how much energy is put into how everything works.
Read this, you'll enjoy it!
Was this comment useful?  Yes

Great Until The End
by ParafinLove
August 27th, 2012, 2:22am
Rating: N/A
An aspiring chef learns the hard way he isn't all that and then proceeds to claw his way forward towards his dreams fueled by his love and obsession with cooking. The story was pretty good until the second to last story arc which I felt was pretty weak. I know you need to ignore plausibility to an extent but that arc really pushed it. And the came the last story arc and the ending which was completely terrible. I guess it was in preparation for a romance subplot in the sequel, the author could have gone any other way and it would've been great. Instead the whole incident ends up leaving a bad taste in the mouth to the point I almost didn't read the last chapter. I'll probably at least skim through the sequel; if things remain platonic I will readily and gratefully retract my negative statements.

Worth reading
by ng luv jj
November 26th, 2011, 7:49am
Rating: 10.0  / 10.0
This manga has a unique artwork for cooking manga, it looks like an action manga but it suits the story well not like other cook manga whose only concentrating in cooking, new dish, reaction, another new dish, etc this manga is more realistic and describe cucina well

bambino! is about once arrogant young cook who is repeatedly teased by his superior, coworker, or anybody around him. the teases, many times, are bloody difficult to handle. but say, he won't get any recognition from his peers without completing them. so then, although he can always choose not to face them, he voluntarily go for it; be it some bully or tasks that just impossible to get done. well, that's how the story goes if I put it coldly.

the good things about this manga, the story teller able to picture passion, skill evolution, accident along the way, and stuffs in such unobstructing way. and thanks to that, we reader can enjoy ourselves getting know if our main character able to finish his challenges. without fussing over details. without missing the flow. and it happen every time we sit to enjoy it.
Was this comment useful?  Yes

Recommended
by Sukets
September 2nd, 2011, 6:20am
Rating: 9.0  / 10.0
Although this manga is a bit overdramatic, it has an good reason. The Cuzina is CHAOTIC, so the best way to express that, is with agressive lines and dramatic art, you guy's make no idea how really is.
Overral this manga is amazing, good storyline, and awesome characters.
A must read, if you like or not cooking.
If i could say the only flaw in this manga, is that the mangaka aborted romance in it, because it seemed that he wanted to do it, but he lack's skills to do it now, without hurting the main story.

Very Passionate Food
by Prot
February 12th, 2011, 10:38pm
Rating: 8.0  / 10.0
This is an interesting manga, definitely good if you're into italian food, restaurants, cooking, etc... However, it seems a bit too dramatic with its presentation. The guy is serving pasta, not going super saiyan.
Was this comment useful?  Yes

Really worth recommending
by Neratin
February 11th, 2011, 12:33pm
Rating: 10.0  / 10.0
I really like that the story focuses not only on the main character but also on the supporting ones.
It's a story about hard work, passion, mistakes we inevitably make and the fight for dreams.
Was this comment useful?  Yes

Very much recommended
by barbapapa
February 9th, 2011, 5:23pm
Rating: 9.0  / 10.0
A highly enjoyable culinary manga, that doesn't get lost in endless, detailed explanations like others in its genre. Nor does it have any made-up gimmicks that throttle the story forward. Just a story about a young, ambitious cook who gets confronted with the hard realities of the business.
Was this comment useful?  Yes

Good COOK manga
by gggjcjkg
September 22nd, 2010, 9:27pm
Rating: 10.0  / 10.0
This manga definitely needs to receive much more attention. It's such a good manga, with good and realistic characters, and realistic setting. The mangaka's storytelling is skillful, and the topic it deals with is not something you come across often. There are, of course, many "cooking" manga out there. But they are all about food, and food battles, and such surreal concepts, not about the most important point: the cooks who make the food. They are not Bambino.
Was this comment useful?  Yes