Login to add items to your list, keep track of your progress, and rate series!
Description
England. France. Germany. What common thread binds these three nations together? Answer: each is famous for producing unique, distinctive, delicious bread.

But what of the island nation of Japan, home to rice and delicacies of the sea? Is there not a doughy, gastronomic delight they can claim as their own? The answer is no...until now!

Kazuma Azuma, a 16-year-old boy blessed with otherworldly baking powers, has taken it upon himself to create Ja-pan, the national bread of the land of the rising sun! 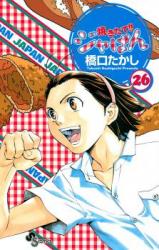 Note: You must be logged in to update information on this page.
Forum Posts Click to view the forum
current arc
over 11 years ago
last volumes
over 12 years ago

Falling down
by Akatsubaki
February 6th, 2015, 2:30am
Rating: 5.0  / 10.0
I couldn't have agreed more that after Pierrot arcs, this manga is losing its touched. The story was really going down hill after pierrot. The mangaka just threw anything to prolong this manga, repeating old tricks and focusing more and more into 'reaction' after eating the bread. Before Pierrot, I could give this manga 8. Because it's funny and refreshing. After Pierrot, giving 4 should be enough. Characters development turned to the worst (especially Kawachi), and it's not funny anymore.

Yakitate
by Loki666
November 1st, 2014, 7:31pm
Rating: 3.0  / 10.0
Ok bread, something different. Although this manga has been around for a while now, the biggest issue is how for some weird reason the manga just went crazy. The plot was downright rubbish as the manga proceeded and has lost its touch compared to the beginning (You have to read it to understand). Overall it is an average read and a very disappointing manga overall by such a good mangaka. No hate intended.

Need-to-say
by heckofacookiemonster
February 14th, 2014, 6:51am
Rating: 6.0  / 10.0
I really respect everyone that gave high rating for this manga, but this manga does have moments that disappoint you. There were two time zones in this manga, B.P. (before Pierrot) and A.P. (after Pierrot). Everything is really fresh and kicking well B.P. I really like how Azuma and Keisuke gets together to fight yada, yada.. However, A.P., it gets draggy because the "story scheme" does not change (kind of like Detective Conan, sorry folks). And I call it a scheme rather than a plot because this story lacks a climax, very repetitive. Character development is the worst. Azuma's talent does not grow. Not to mention Kawachi, who is kind of spineless most of the time. Kanmuri is also dependent on Azuma. SuwabaraXMonica are very fine lovebirds though hehe.. Giving this a 6 is more than enough.

Spoiler alert!
Did anyone notice that up to the Nori-guy competition, the contestant who serves their bread last usually wins?
And I am sorry, I actually root for Yukino to win on the tart competition because I need Azuma to have some challenge and disappointment. That is how a story gets real!
Was this comment useful?  Yes

WHAT HAPPENED???
by NightAir
June 4th, 2013, 8:17pm
Rating: 7.5  / 10.0
It really deteriorated. It was a good manga to read because, hey, a manga about making bread is something new--but after a while everything gets rehashed. Still same battles, still things, and after a while, you get kind of tired of it.

I'm also upset at how super-powered genius Azuma was, right off the bat? Just. What. There was literally no real challenge or room for him to grow. Especially later on: All the answers, let's depend on Azuma! Argh. No secondary character shining.

Spoiler (mouse over to view)
All the character growth was for another one, but he was treated like dirt and used as comedy fodder.

Also, people turning permanently into their reactions is ridiculous. I don't know what happened, and I kept on hoping Kawachi would be given a better role, but he got placed as the mudmonkey who doesn't know anything, and suddenly he's lumped with all the judges for a reaction? The ending was ridiculous, I don't even know what was with the bread-people, some random quick plot for the global warming, I just-????

MondSemmel sums it up well.
by 2dere
October 21st, 2012, 4:04pm
Rating: N/A
Read till then end of the Perriot arc. Then stop.
Thats still quite a hard thing to say because, maybe besides Hajime no Ippo and G.T.O. have I laughed so hard throughout a manga. My dad knew when I was reading it because he could hear me laughing in another room. So I have good memories of this manga but yeah, story does decline and its nice to only see something at its best.
I do recommend it to anyone, they can decide if the humor is for them. But I also recommend a stopping point too.
Was this comment useful?  Yes

Declined towards the end.
by MondSemmel
September 24th, 2011, 6:05pm
Rating: 8.0  / 10.0
I really enjoyed this manga, about up to the amazing Pierrot arc. But afterwards, the reactions became really quite too insane even for me (i.e. people turning permanently into animals after eating bread) and the jokes either became worse or just repeated too often. Also, the reaction-based puns sadly often don't translate well from Japanese to English.
For the amazing first ~120 chapters (until the end of the Pierrot arc) I give a 9, the rest doesn't really deserve more than a 7. So this manga gets an 8 from me. But really, just read everything until the Pierrot arc and then stop. Or read until then and then continue, aware of the fact that the story gets worse from that point on.
(Also, the ultimate ending is horrible. How could a mangaka that did so much research on breadmaking end up with such a misguided treatment of global warming? I waited forever for the scanlations of the last volume, but after reading it, I'm not surprised it took forever to find someone willing to translate it...)
Was this comment useful?  Yes

Couldn't read past vol 1
by blackmokona
April 15th, 2011, 5:55am
Rating: 4.0  / 10.0
Yakitate!! Japan is too straight forward of a shounen. Take away the bread-making, and you would recognize the recipe anywhere. You have a hero. He has a dream, he has a talent, he has a backstory (reminiscent of HxH), and he has a butt-monkey sidekick. You have a bishoujo, you have a stern senpai, you have a mad-scientist-like mentor, you have a special plot device, and you have a shounen manga. Too perfect, too out-of-the-book, too boring.

meh
by xxLOVE
April 2nd, 2011, 10:10pm
Rating: 6.0  / 10.0
Wow...What happened?
This manga was so amazing, it should've been ended much earlier than 26 volumes. It starting getting ridiculous especially in the last few volumes.
Spoiler (highlight to view)
BREAD EYES? R U SRS?
Was this comment useful?  Yes

lost sense
by ShadowSakura
June 21st, 2010, 8:01am
Rating: 3.0  / 10.0
i loved the first 7 volumes. But somehow it turned into something completly ridicoulus. Is the mangaka on drugs or something? Where is the spirit, where is the goal? No wonder the groups stopped scanlating it
Was this comment useful?  Yes