Login to add items to your list, keep track of your progress, and rate series!
Description
From ADV:

Trouble always seems to follow the beautiful and sassy Kaname Chidori. Though she is only a high-school student, Kaname is constantly the target of terrorism. Lucky for her though, the dreamy Sosuke, an undercover agent from Mithril, is one step behind her, ready to protect her at any cost. But will he be able to save her from harm every time she is in trouble? 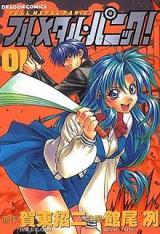 Note: You must be logged in to update information on this page.
Forum Posts Click to view the forum
What chapters from the manga does this cover...?
over 8 years ago
Interesting project related to Full Metal is in the works
over 11 years ago
Full Metal Panic's Next Novel Listed for July Release
over 12 years ago
Fullmetal panic live-action
over 13 years ago
does this follow the anime?
over 13 years ago

The one with Tateo as the artist are good.
by MASTER GUYVER
July 14th, 2021, 10:36pm
Rating: N/A
Even though the 3 seasons of the anime had me laughing (not the fourth) I was afraid it would be a downgrade but it wasn't. The personalities were well down. Now when I say the manga is good I'm only speaking for the one with Tateo as the artist.
The anime is better but the manga reminds you why you should love the anime.
Another warning the manga is a mix between season one and two.
Was this comment useful?  Yes

Its decent
by MangaGhost
February 17th, 2012, 12:29am
Rating: 7.8  / 10.0
I think the manga is a fun little series with some nice character designs. I don't care so much for the mech designs tho, I think they looked better in the anime. Story wise the anime is more structured, while the manga in the beginning feels like a series of one shot chapters strung together. However, I would say that you get a little more detail in the manga and Chidori is nicer and more sympathetic in the manga than the anime where she is full-on Tsundere. Of course its kinda explained that her rough personality is in part due to her having lived in America until middle school and she had difficulty fitting in when she got back to Japan as she too often spoke her mind. So what we've learned is that America will take young impressionable children and turn them into violent tsunderes, lol. Overall its decent and I'm interested in giving FMP Sigma a try.
Was this comment useful?  Yes

.....
by John21
December 18th, 2009, 8:51pm
Rating: 9.2  / 10.0
its quite funny. Its got some romance though mainly one sided. Its got action. The only thing missing is like a good twist or wateva. I mean story is good, but there is not many mysterious elements and hardly anything is revealed about the background of Sosuke. I guess the sequel will do that. But still its good. Art is really good as well.
Was this comment useful?  Yes

hard to dislike
by hamburgers
June 24th, 2009, 6:29am
Rating: 8.0  / 10.0
There's a lot to love in this series: Great character development; few, if any, characters remain 1-dimensional by the end of the novel. Beautiful artwork. Creativity in a take on the mobile suit 'genre'; different for the sake of different isn't good, but this mangaka makes it work. Exciting, well-drawn battles? Cute girls? Lulz? Plenty to go around.

And best of all, a wonderfully fast pace that doesn't leave you frustrated at the end of every chapter because they spent the whole episode chatting while charging up <3

There are other series out there that delve deeper into the characters' past, have heavier love battles, etc. But none of them have done so in less than 100 chapters.

If you want a series that's easy to pick up, easygoing, doesn't drag things out, has lots of lulz, and keeps you coming back for more, look no further. I highly recommend this series.
Was this comment useful?  Yes

Fantastic!!
by Selenium_Glow
July 25th, 2008, 2:49pm
Rating: N/A
This is one manga/anime I just can't stop enjoying no matter how many times I read or watch.

It's something that has fantastic amount of Sensible action and amazing comedy.

It's a must read for anyone who likes to read manga. The story is fast and will never bore you. The comedy is just fresh and the action is just good enough to pump up your blood...
Was this comment useful?  Yes

Pretty Good
by JJTang
January 6th, 2008, 8:46pm
Rating: 6.0  / 10.0
I liked the Comedy and Action. Romance wasn't too big of a factor in the story, which disappointed me. Focused a lot more on School Life which I enjoyed.
I'll be looking forward to reading Full Metal Panic: Sigma, provided more chapters get scanlated.
Was this comment useful?  Yes

GREAT manga!
by palabasa
September 25th, 2007, 10:54am
Rating: 8.8  / 10.0
this manga is quite close to the anime version, it's quite interesting and very fast moving..the recipes are there like comedy, romance, and action.

a pity the scanlators are not really taking a notice of this manga and there alredy sequels coming out when its not completely scanlated yet..

anyways thanks to BYAAAH for picking this one up. good luck and god speed! coz i want more!
Was this comment useful?  Yes

Genre overflow!
by Megaton
April 20th, 2007, 12:21am
Rating: 10.0  / 10.0
This series has everything; Comedy, Action, Romance, etc...and it does them all very well. If you liked the anime then this is something you should also check out.
Was this comment useful?  Yes