This is also a continuation of Koukou Tekkenden Tough which followed the main character, Kiichi, when he was younger and was training under his father Seiko Miyazawa. (Knowing the prequel isn't necessary at all.) Less... 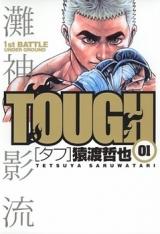 Good fights and nothing else.
by PZcolo
March 26th, 2017, 8:50am
Rating: 5.5  / 10.0
Good art, flow and clarity, you can see in the sequences the movements and how the fight goes from one point to other, that itself is an accomplishment, most mangas are just hazy in that aspect.
Other than that this doesn't have much going for itself at all, chars are boring (except Kiryuu maybe) and have little depth, you just get the expected Kiibo wins every fight through miraculous growth in the fights over and over, then you get a "Luke I'm your father" drama crap in the middle and latter the deaf-mute suddenly is able to hear and that was it for me.
Add to that the length of this manga and it will be hard not to get bored with it, half way though I got fed up at least.
So unless you are very into fighting stories with little less to offer other than that action it's hard for me to recommend this to anyone.

hurm
by TaoPaiPai
October 8th, 2015, 6:50am
Rating: N/A
it is an improvement over Koukou Tekkenden Tough
but
alot of characters seem to just change personality
Kiryu is first like Yujiro from the Baki manga wild and out of control
then he becomes soft like a little kitten by the end

and the ending is just bad
the whole story about the MCs father and being born with specal powers becouse your father have trained in a matrial art/special bones OMG and their fight was just bad
Was this comment useful?  Yes

I love this MMA manga!
by chaechaeboi
April 14th, 2014, 11:39am
Rating: 10.0  / 10.0
I have trained in MMA, jujitsu, wrestling, and krav maga, so I always appreciate a portrayal of realistic martial arts in manga. That being said, a lot of this series is very unrealistic in the sense that many techniques should kill people and are impossible to do. It's a very fun exaggeration for mixed martial arts fans and action lovers alike! The story is not deep, but I mainly read this series for the action. For more realistic mixed martial arts and deeper stories try Holyland and All Rounder Megaru.

what just happened?
by bookawkee!
January 21st, 2013, 3:32am
Rating: N/A
so there havent been any releases for tough for some time now...and all of the sudden there are a few.but from the last chapter i read,kiichi was fighting seiko,but then it jumps to sometime after? did the scan crew skip some chapters?

mmmm...ok yeah there are some big gaps here. thanks to the scan crew for getting these out,but im really lost now. to anyone reading,its up to you if you want to read through the jump.

~~~
by mono-sama
October 29th, 2008, 4:37am
Rating: 8.0  / 10.0
if you like baki/garouden/riki oh/"insert any fighting manga name here", you will like this.
its pretty good for martial arts manga fans as it seems to be pretty well researched. and extremely well drawn, especially the fight scenes.

YOU DONT REALLY NEED TO READ THE PREQUEL FIRST, AS ALL IS EXPLAINED AS YOU GO, PRETTY MUCH

Only fights are worth
by darkgenio
September 7th, 2008, 3:33am
Rating: 5.0  / 10.0
If you like action and martial art mangas you might like Tough. You will not find anything deep in Tough though. Most dialogues are flat, the story is a linear, opponent, stronger opponent, stronger opponent, which will ultimately end with the "Battle king". If you like Vagabond or Blade of the immortal and appreciate mangas that go ddeper, then Tough is a Manga for teens.
Anyhow, Saruwatari can draw GREAT fights. He is one of the best out there. Fights are dynamic, interesting and clear, he lets you feel speed and pain and that's how fights should be. Only pain in the ass is the Voice Off often commenting the fight "Oh that's really a unique technique" and honestly, he could have spared us that Naruto like crap.
A 6 all in all cause art is clear and nice, characterization is not so bad either.
Was this comment useful?  Yes

great manga
by Manmankyle
September 10th, 2006, 4:40pm
Rating: 10.0  / 10.0
this manga is great for martial arts lovers.with the plot with a underground fighter int he yakuza that wants to help his pop but the fights are awesome worth the look


Almost no plotline, not much character progress, Art is , well, 9/10. And the fatal weakness of fighting manga: NO CHICK. There's one or two pages with naked chicks but that dont count. No girls or women. Man, that's boring.

Well, as of c23, one female fighter appear. And maybe, just maybe it will get better in future. But I wont held my breath.

If you just like fighting scenes alone, this manga will give you plenty of them. So that's one good point for it.
Was this comment useful?  Yes