Login to add items to your list, keep track of your progress, and rate series!
Description
It's an epidemic of accidental death! Multiple college students receive odd voicemails from themselves, messages from the future, and all they contain are the screams of their own deaths. A few days later, at the date and time of the message's posting, they die in mysterious accidents, and oddly enough, each have a candy in their mouths.

Latest Release(s)
v.1 by Illuminati-Manga over 14 years ago
Search for all releases of this series 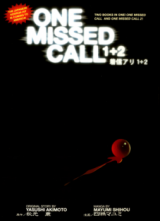 Well...
by calstine
August 19th, 2015, 10:50pm
Rating: 7.0  / 10.0
The plot itself is quite good -- much better than one usually expects from a horror manga, especially when both books (One Missed Call 1 & 2) are read together. VampireBanana, below, complains about characterisation, but... Honestly, what horror story wastes (the writer's and the readers') time on expounding upon the characters' pasts and future dreams when they're all going to be killed off at the end anyway?

In a sense, I really loved the art style, with it's high-contrast drawings and it's pretty -- but not flowers-and-sparkles pretty -- characters (the couple in the first book, Yumi and the Hiroshi, were especially nice-looking). However, the artwork is also its greatest flaw, wherein all the important female characters look very much alike (interestingly enough, the males and the less important females have distinct looks and styles). The scene transitions were also poorly rendered, though less so in part 2 than part 1.

I do recommend this manga to horror/mystery fans, but I also advise having some time and patience on hand before attempting it.

Wasted potential
by VampireBanana
June 10th, 2011, 8:29am
Rating: 5.0  / 10.0
The writing had a lot of potential to be far more. Alas, the characterisation was poor and the pacing flimsy, so the atmosphere of the story was only so-so. We've little idea who most of the characters are but the writing doesn't expand much on any of the concepts in the plot, either. Furthermore, the art didn't always convey the action and atmosphere of the moment. Had the artist and the writer taken more efforts to truly flesh out everything, the story would've a lot more impact.