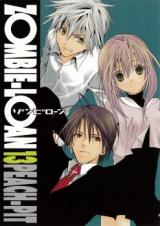 Note: You must be logged in to update information on this page.
Forum Posts Click to view the forum
Peach-Pit Ends Zombie-Loan
over 11 years ago

Just watch the anime
by nozomiEX
August 15th, 2018, 2:17pm
Rating: N/A
I stumbled across the Zombie-Loan anime and found it to be an overlooked title. It wasn't the greatest, but it was serviceable and had a charm to it that made me glad to have watched it. But the anime ends VERY early on compared to the source material, so of course I had to find out the full story. What a mistake that was.

I restarted the manga from chapter one, and I have to say, it's a mess and only gets worse as it goes on. The art is acceptable in moments of calm, but action scenes are unintelligible and more importantly, uninteresting. But I wasn't here for the action, I came to find out how the story unfolds. This is where the "mistake" part comes in. While the anime is relatively focused and concise, the manga itself is a disorganized mess, and it only gets progressively worse. It's only a little sloppy while it's in step with what was covered by the anime, but by volume 7, it accelerates it's descent into a cobbled together amalgamation of asspull after asspull. Not asspull as in "bullshit that character should have died" or some such frustration at characters being miraculously saved (although there is that). I mean asspull as in everything that unfolds is being made up on the spot, as if pulled directly from the author's ass. Concepts and important plot elements arise within one dialogue bubble, heretofore completely unmentioned, unforeshadowed, not so much as a single hint that one could theorize the existance of without the sudden exposition. Not only do these sudden developments come out of literally nowhere, but when they do, they come with an explanation that will leave you more confused than before you read it. By the time you get to the last volume, your eyes will be spinning a hole through your skull. For example, the children of Elizabeth, a concept that is completely irrelevant until the very moment it is explicitly introduced, is something that retroactively applies to those characters from the beginning of the manga but has absolutely no bearing until the dialogue bubble first mentioning them in the last volume, and the explanation of what they are and how they are relevant just leaves you with more questions about how exactly the Zombie-Loan world works and very clearly tells you the author made it up as he wrote this very volume.

Inconsistent, incoherent internal logic leaves you with a story that satisfies absolutely nothing. If you are curious enough by the synopsis to try out this series, stick with the anime, because it's a lot more fine-tuned and relative to how the manga turns out, is a lot more sensible. All that awaits by reading this is disappointment and confusion.
Was this comment useful?  Yes

Good but not great
by zengoats
January 21st, 2013, 4:57pm
Rating: 7.0  / 10.0
Zombie Loan's a mixed bag. It definitely has some things working in its favor, but on the other hand, it has some faults. I really enjoyed the premise and most of the plot. It starts a bit episodic, but later, the overarching plot takes center stage. Unfortunately, once the overarching plot is introduced, everything gets a little muddy, and the characters start behaving less like themselves and more like pawns that only move for the sake of progressing the story. That being said, the characters themselves are pretty stereotypical (timid female, energetic male, mysterious princely male), and they don't really develop very much. Despite this, I think Zombie Loan is pretty likable, and for some reason, I'm really fond of it. Knowing its faults, it's difficult to recommend Zombie Loan, so I guess I can only recommend this to people who're into zombie manga or supernatural action manga. Also, I think it's worth mentioning that in this case, I think the manga and anime are equally good, though the manga is considerably longer and tries to answer more questions (whether or not it succeeds in doing so is questionable).
Was this comment useful?  Yes

Disillusioned
by Alwerien
August 5th, 2012, 3:29am
Rating: 7.9  / 10.0
Back when this manga was still running and about the time it was turned into anime....I really liked it. The story was great, characters and their past interesting. But then when it started to be more about Michiru, everything started to get too confusing. Sadly, while the deeper story might have been interesting, it wasn't exactly executed well. I have reread all of the books so I would finish the series this time and I definitely enjoyed the earlier ones much more.
All the way up to Shito's past, I have enjoyed the story. After that though, there were just too many confusing things that kept contradicting each other and the story wasn't kept too well together. And honestly the end.....I hoped they would end it great after the dragging confusing chapters where they would just randomly jump from place to place without any proper explanation whatsover. But in the end there was just jumbled excuse of ending resulting in a sort of unsatisfying end.

Spoiler (mouse over to view)
And in the end, the few characters I found really interesting, were the only ones that ?disappeared? aka Shiba, Shuji and Yomi. Don't get me wrong, I love Chika and Shito and others but I was seriously interested in these. I also wonder what happened to Lyca since he was completely left out from few last books. In the end....after enjoying the series so much, the end left me with a bitter aftertaste. I guess it leaves space to wonder what's going to happen in future and if they all will come together again in new office but honestly that was just weird. Are they all going to die now again (-> remember) because they are fated to and make new contracts or what...sigh. I think the ending could have been done well, but it just seems kinda ironically untied.

Really exciting, but slow
by kimihoshi
February 13th, 2012, 1:08pm
Rating: N/A
First off, I will say the story is really unique and good. The structure is great in the beginning but
Spoiler (mouse over to view)
the story begins to be very confusing when we get to know more about Xu Fu, those Chinese mafias. Touhou is a really interesting guy but I didn't like that we couldn't get to see more of his abilities
Michiru (the main character) is really annoying
Spoiler (mouse over to view)
Thought I'm aware she's the main character, she is utterly annoying as she's focused 90% of throughout the whole story. I feel that Chika and Shito are focusing too much on her and they're only supposed to be mates. It's annoying that everyone else consider her as special for being a human when she is not.
I almost gave 9 stars thanks to her but the story is so awesome that I couldn't hehe.
I really loved the part about the story of Shito's life and when the A-loan saga began

I really recommend it, one of Peach-pit's best work ever !
Was this comment useful?  Yes

Not bad, not the greatest
by pichpat
November 26th, 2011, 10:01pm
Rating: N/A
Zombie Loan starts off well in the plot idea area: you're dead, about to go to hell or heaven, but then you get offered to extend your life on a loan as a zombie? Zombies on loans; yep, interesting concept. However, I do admit that probably the weakness of the manga is the writing when it comes to plot and character development.

First, if you are about to read Zombie Loan, be warned, the plot develops much better after volume four and five. Our three main characters grow up a bit and a surprise purpose of Michiru's existence is thrown about, plus hierarchy problems in the zombie-life-fate-system.

I am not fan of the writing. The volume may end, but it does not clinch me enthusiastically to continue for the next one. I read the next one for better character development, but after getting to vol.12, I knew that the last volume I was going to read it for the resolution and Michiru's doings. The characters are okay. Michiru is like a gray slate which you can pair almost with anyone. Yes, she becomes more interesting with what she is, but you won't see other sides of her. The gun-sword duo are funny with their actions and much more developed, so they are the best writing of the manga. The rest of side characters and antagonists, though, is what I was really expecting much more. Good potential profiles (like Shiba, Zarame, Koume, Bekko, Hakka [almost any side character, like Yomi and Koyomi]), but they just fill their roles too simply; nothing deeper you could say about them...just guessing work, which you can also see of the writing.

Just how sometimes the artwork is messy, so it happens with the writing. The technical details of the hierarchy, singularities, ferryman are mostly vague, even by the last volume. The kanji and licensed translations help clear some of the vagueness, but it stays the same... You can't really grasp details or exact why's or how's. So Zombie Loan had great ideas with plot and characters, but they weren't developed to their best. It's worth a try though.
Was this comment useful?  Yes

I LOVE ZOMBIE LOAN :D
by MichiruXshitoXchika
March 29th, 2011, 10:45pm
Rating: N/A
I love zombie loan alot~ so
i want to know what happens next, even though many people quit reading this, they just dont appreciate it >.<
I love the story! its going deeper and deeper.. so mysterious. i want more chapters. i love peac pit's works

KIND OF GOOD
by marionoflag2
May 19th, 2009, 12:10pm
Rating: N/A
Spoiler (highlight to view)
yeah it was good at first, and all, the plot has good points and starts to speed up lately,what really bugs me was the yuri elements that are thrown in abruptly at some point, the mangaka kind of mislead you to think she will fall for one or the two main male leads, but then the mangaka suddenly throws a "she is goin to realize her feelings for a girl very soon". i just keep reading to c how this plays out, if it does turn out to be yuri then ill stop reading cause, well, yuri hurts my male ego and i already had hopes for she to fall for shinto. dammit it pisses me off!!

Not exactly gripping
by CuthienSilmeriel
November 23rd, 2008, 7:57pm
Rating: 6.0  / 10.0
I read the first volume when i was bored and it was alright. Interesting plot but I didn't get into the characters at all and it went a bit slow for me. The art is alright, nothing stunning and I failed to find any humour in this. Also the main female has more potential to annoy me than win me over. All in all it's good to kill time but I'm not exactly dying to find out what happens, or even beyond mildly interested.
Was this comment useful?  Yes