Login to add items to your list, keep track of your progress, and rate series!
Description
â€¢ Ushirokara Dakishimete (Embraced from Behind)
"If I could beat him, I would become his lover...". Koichiro believes that the only way he can ever woo his best friend Soji into a relationship is by challenging him with a judo match for love!!

â€¢ Sweet Smell
A baseball freak fall in love with the alluring scent of his new tutor.

â€¢ Sekai de Ichiban Happy Honey (The richest sweetheart in the world)
The ultra rich Kagura ... More...
â€¢ Ushirokara Dakishimete (Embraced from Behind)
"If I could beat him, I would become his lover...". Koichiro believes that the only way he can ever woo his best friend Soji into a relationship is by challenging him with a judo match for love!!

â€¢ Sweet Smell
A baseball freak fall in love with the alluring scent of his new tutor.

â€¢ Sekai de Ichiban Happy Honey (The richest sweetheart in the world)
The ultra rich Kagura decides to go to an ordinary high school for a year. He will spend whatever it takes to be with his new friend Hayakawa Less...


Associated Names
Embraced From Behind
Love Must Persevere!
うしろから抱きしめて 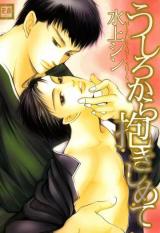 
Category Recommendations
Koi Tokidoki, Yaki Saba Teishoku
Kare wa Mashou ni Tsuki
Hatsukoi no Tsuzuki
The Story of Being Courted by a Childhood Friend With a Strong Personality
It's Not Like I Don't Want To Love

Mixed reactions
by WhiteIsBlack
January 25th, 2020, 8:27am
Rating: 8.0  / 10.0
The first story is basically a guy wanting to make his crush his. He believes that he had to make come true by winning not just his body but also heart. Not impressed by it.
The second is alright. What I was concern was the tutor looked younger than his age. The guy smelling his scent reminded me of omegaverse where an alpha smells omega’s pheromone.
The third chapter was sad but beautiful. It’s basically a love triangle of a loyal guardian or adviser falling in love with an emperor who loved someone else. I really enjoyed it so much that it’s one of my favorites.
The last three chapters are fun and silly. This is something I sometimes don’t bear with it bc of rich, spoiled people doing things their way. Though it lacks conflicts, the relationship is sweet and heartwarming.

Hilarious
by Pebble_
November 26th, 2011, 7:03pm
Rating: N/A
Not the most interesting plot I've had in a yaoi, but I'd recommend it for the comedy alone. I had a lot of fun reading, special mention to the part where Hayakawa's parents meet Kagura and his family : Pure win!
Was this comment useful?  Yes

ridiculously funny!
by HumptyTortie
April 14th, 2011, 3:59am
Rating: 8.0  / 10.0
The art is so-so, but the comedy is excellent here! The way the author blends in the humor with the romance is just perfect! Although there's not much of a plot, it's still an enjoyable read.
Was this comment useful?  Yes

A Feel Good, Light-Hearted Story, Well Drawn and Written
by MightyMaeve
June 24th, 2008, 5:26am
Rating: 8.5  / 10.0
I loved it! I don't usually select light-hearted, fun stories (they are just not my preference), but every now and then one needs a break from dark, demented, dangerous and desperate. ;)

It's hard to create a BL stories that makes one laugh and at the same time love the characters and find their sex scenes riveting. This one did both and how!

Hayakawa may have made the first move ('Where did he touch you?'), but it was the indomitable, never-gives-up Kagura who made the moves just escalate and keep coming, wave after crazy happy wave. I like how Kagura, although silly, did have a serious side (when he was broken-hearted about failing at the aunt's inn.) Kagura is over-the-top! (I wonder where he learned that?!) He knows how to enjoy money, but he never forgets where money falls on the scale of importance. And Hayakawa was such a solid, steady, strong seme.

Such a seductress in chapter 2! ('It's silk." Place H's hand on ass. "Feels good, right?" Hee!) The final chapter was just so sweet with the discussion about photo vs real person.

All the secondary characters interact hilariously. Their expressive faces and actions. (K's 'thugs' throwing H's parents in the car. K's mom thanking H's mom for her 'gift' and then wondering what it is.)

Read this and feel good.
Was this comment useful?  Yes

Ushirokara Dakishimete
by angelkurisutin
August 20th, 2007, 8:45pm
Rating: 9.0  / 10.0
I was unimpressed by the art and a bit hesitant to read because the description didn't sound like anything special either, but I'm really glad I did. ^_^ The story was super funny, and really really cute! I just loved Naoto, and his parents too! They were such a hilarious family. And the last page of the manga, the ending of the story, was probably my all-time favorite, even being as simple as it was. I would suggest this to anyone who wants a cute, super funny read!

The Richest Sweetheart in the World...
by nameisks
June 7th, 2007, 7:47am
Rating: 9.0  / 10.0
This was so funny! Tombs up for the uke! Instead of spending half of the manga sitting in a corner, crying and being insecure he was pushy, spoiled (in a funny way) and determinate enough to get what he wanted (the seme).
The art was better than I thought it would be after seeing the cover and some of the situations were hilarious.
To sum this up: I really liked it^^