Login to add items to your list, keep track of your progress, and rate series!
Description
From Shoujo Crusade:

1) Hatsukoi no Tsuzuki
After reaching a dead end in a relationship that never really started, Ogu and Kyoka meet again 4 years later. Will things unfold differently this time around?

3) age22
Nene made a promise with her 'childish childhood' friend. But will he remember these years later?
4) Suki na Kuseni 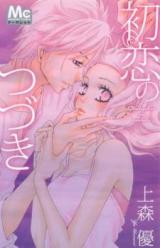 Last 2 Stories!!
by foolala
July 12th, 2012, 12:25am
Rating: N/A
I didn't really like the first two... the lead females were kinda lame in both of those.. both were spineless and insecure, all they did was mope, cry, and pine for the guy without actually doing anything resourceful :\

In the first one, it was good until
Spoiler (mouse over to view)
the girl finds out that the guy dated other girls after they broke up in middle school and she got all jealous even though SHE HERSELF had a reputation of dating around too. Stupid how it was the guy that apologized to her in the end -.- wtf.

The second one was especially lame because of the girl's excuse to have sex with the guy all the time.. it's even worse when he accepts her offer everytime even though he just broke up with his girlfriend -.-...

It was the sweetest of the bunch! ^_^

The last story was HILARIOUS LOL. It was a cute, light-hearted fluff story. I loved it when the guy got all flustered around the girl, and also unlike the other stories, I liked how the girl finally decided to put her pride aside and confess to him

The best part was when
Spoiler (mouse over to view)
the guy kept seeing her panties and overreacting and her calling him a pervert and that "guys are perverted because they're made up of sex and water" LOL!!

Nice compilations
by cliff
May 13th, 2012, 1:53pm
Rating: 9.0  / 10.0
Nice oneshots compilations. My favorite is the first one when the heroine met her ex and things seemed to be different from they used to be so they have to relearn about each other again
Was this comment useful?  Yes

Friends to Lovers
by bactbob
March 13th, 2012, 3:02pm
Rating: N/A
Friendship turning into love is one of my favorite themes, and this is pretty much a one-shot volume of that, haha. The characters weren't ridiculous (by that I mean overly ditzy girls/brooding possessive guys), so that was another plus. My favorites were stories 1 and 4.
Was this comment useful?  Yes

So refreshing, so good! Different from other, i think. I enjoy it every page! The character and the story is suitable. I'll recommend this! ♥
Was this comment useful?  Yes

i like.
by countingwounds
December 24th, 2011, 8:49pm
Rating: N/A
it really was refreshing, and you can really feel the emotions in the stories. i got caught up in all of them.

i wasn't going to leave a comment, but it left me feeling something, which is more than i can say about a lot i've been reading! (:
Was this comment useful?  Yes

Nice.
by Beauceron
November 7th, 2011, 11:49am
Rating: 9.0  / 10.0
Ah, these oneshots were nice. They were a clear step-up from the regular shoujo-mush, I thought, even if the setting was the usual. They almost balanced the line between shoujo and josei. I liked the third story especially, it actually moved me a little, which is always nice. I usually feel slightly annoyed while I read shoujo but reading these stories gave me a good, happy feeling.
Was this comment useful?  Yes