Login to add items to your list, keep track of your progress, and rate series!
Description
Rito is a high-school boy who just can't confess to the girl of his dreams, Haruna-chan. One day when coming home and sulking in the bath-tub, a mysterious and barely clothed girl appears out of nowhere. Her name is Lala and she comes from another planet... 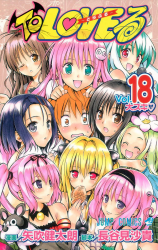 Its a heavy fan service harem driven manga with a story nothing more nothing less
by Patchy shee
October 25th, 2022, 8:35am
Rating: N/A
Its really just that I don't hate nor like it
Was this comment useful?  Yes

The comments are so misleading
by Trimutius
June 17th, 2015, 4:29am
Rating: 10.0  / 10.0
Why everyone says that it ended? There are some comments that even say "why it ended" which were posted after the sequel started.

And that sequel is a proper sequel, by the same author and artist. Just that sequel is in seinen magazine instead of shounen, but I actually liked sequel a lot. So check it out before saying that ending is too sudden.

You just can't have that continuation in shounen magazine...
Was this comment useful?  Yes

Sadly it had possibly the least satisfying ending I've ever seen, then again don't all harems?
Oh well try it out
Was this comment useful?  Yes

It's good afterall
by MitratamaOSIS
September 14th, 2010, 7:06pm
Rating: 10.0  / 10.0
I don't know about the divorce thing until I read you guys' comment about it. well, if it's the case, then it makes sense why this series' ending is so bad. It should continue for some more longer than only 18 volumes.

I still love Yabuki-sensei drawing and looking forward for his Mayoi Neko Overrun next chapter. and for justice it's 10/10.
Was this comment useful?  Yes

Don't understand
by Sukets
July 22nd, 2010, 12:54pm
Rating: N/A
Seriously, i dont know why people like this series...
they usually say that pastel just hit the corner, and has an slow pace romance,

BUT THIS MANGA DOESN'T HAVE PACE AT ALL

this is one of that over rated mangas. Seriously talking, the ending wasnt too much of disapointing, cause the whole manga was like that, didnt change anything.i
I finished the manga just cause i didnt wanted to lose the investiment.

The history was turning too much fanservice and anoying.
The artist new manga - Mayoi Neko Overrun! - is... at least... a thousand times better, till the moment at least than this series.

the art is good, is just that all the main character's piss me off, and the history doesnt change.

if u like to see fanservice...well i recomend to you check around an dj of this series... the serie itself doesn't worth the time spended in it.

Ending
by Twitching Cheese
July 11th, 2010, 7:46pm
Rating: 9.0  / 10.0
For those complaining about the abrupt end, there were pressing circumstances (understatement) that essentially forced this on it. Unfortunate but it does happen.

For some more info on that check the "Creator Breakdown" note on its TVTropes page.
Quote
Essentially, he had to end the manga to prevent his ex-wife from making a third custody and money grab for his daughter — after she illegally wiped his bank accounts out, stole the laptop he used to create the manga, and blackmailed him for custody of his own daughter after kidnapping her. Even now she is claiming rights to the Haruna character and all profit made from the anime, manga, and merchandise.

holy shi... woman are scary!!!
by mca081983
January 18th, 2010, 8:19pm
Rating: 10.0  / 10.0
yeah you are right it seems like is't true about YABUKI Kentaro and Kashiwagi Shiho divorce shi...
she won the rights of haruna character so every time he draws haruna he must pay her the according amount of money . holy cra.... poor guy I really feel sorry for him , for example is like if every time the mangaka draws the tokyo tower on his manga he must pay to the owner of the building some kind of money ...... to tell you the true guys this Kashiwagi Shiho is a real bitc............ bye
Was this comment useful?  Yes

Yea..
by U-Jin
January 14th, 2010, 7:31pm
Rating: 10.0  / 10.0
Acctually the half-assed ending had little to nothing to do with manga itself, its all about mangaka's private life, or to be exact - about his bitc.. i mean wife, who was model for Sairenji.
I dont know the details but it seems she had an affair, stole his money, wanted to take his daughter, and whats funniest - she wants full rights to Haruna character, so if this manga continued he would have had to pay her each time he draws Haruna.... arent woman scary? Just one woman, and thousands of fans are pissed/dissapointed~

Forgive me if this info is not valid, as there is no real way to confirm it.
Official publications stay away from artists real-life-problems.
Found some confirmation on web, but its in japanese~

Edit: Surely you all noticed how Haruna got cast aside as the series progressed. Also, his ex-wife (they divorced) is Kashiwagi Shiho - google it. The guy with horse mask that is often mentioned is from nico-nico and he is the one she had an affair with. Just a bit of trivia~