Login to add items to your list, keep track of your progress, and rate series!
Description
The story revolves around Tsukune Aono, a boy who accidentally gets enrolled in a school inhabited by monsters and demons. He quickly befriends Moka Akashiya, a vampire who soon develops an obsession with his blood, and later meets other girls who soon take a romantic liking to him. 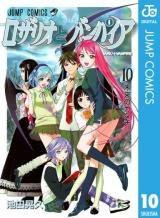 Boring boring boring
by john9983
February 27th, 2020, 1:30am
Rating: N/A
each manga chapter is the following
1.MC comes to school
2.bad monster pops out of somewhere
3.monster defeated
with addition of ecchi
I dont get why ,this reptitive shit is popular.
Was this comment useful?  Yes

It's the bee's knees. The Bishop's knickers. The Dog's wag.

The best School/Supernatural manga I've had the pleasure of reading, and one of the best romances to witness. Period.

Characters are silly, young, and foolish. Full of errors and make many mistakes, just like many kids their age. But as the author's drawing skill improves and as the plot deepens, you really get a sense of a coming of age, a growth of maturity, of perspective. Not only is this visible in how the characters think, but also how they act and treat one another. It is a treat to see how this group of friends form and grow close to one another, how they face challenges together, and how this carries onto the next series.

The plot? Appears to be simple, but is an amazingly delivered, each arc passing the torch with ease and realism. The escalation is crazily well done, starting off with dispatching delinquents before culminating into genuine threats. After the main engine of the story kicks in, every chapter is relevant. There are no filler chapters. No brakes.

The romance? Amazing. The subtle cues revolving the principle heroine, Moka, both Inner and Outer, and her relationship with the protagonist Tsukune are amazing for the setting, and demand you to follow through into the next installment of the series to witness the continuation of their relationship. Not restricted to Moka, however: The confessions, introspections, and heartfelt conversations that occur are juvenile and moments of epiphanies, where characters reconcile. Each situation is different, although often stemming from anxiety and other feelings related to insecurity.

As a reader who has followed this series update by update to its current state, I highly recommend this manga to the young and restless, for a relatable experience and story about acceptance, friendship, and bravery. It is my favorite manga, because unlike any other manga I have read, you will relate to one of these characters. And through this story you will stand witness to how they struggle and triumph over their own flaws and the challenges that they face.

Enjoy one of the best mangas created so far in the century. I know you will.

So, I personally first discovered the monster-academy genre through Rosario Vampire. I liked the variety of monsters featured, but there was a certain lack of character development. The romance was also kind of shallow----it gets better in rosario vampire II in my opinion (especially with the succubus)
Was this comment useful?  Yes

I love it
by Cacuga
June 10th, 2013, 3:30pm
Rating: 8.0  / 10.0
This manga doesn't have anything new, a usual harem with some minor ecchi, action and supernatural stuff. However, i can't tell why but i'm in love with this manga. Maybe cause the story doesn't rush in any point. Ok i'm not english native so it will be hard for me to explain sorry if i mess up.

In other mangas seems like the characters growth up in power in a matter of seconds like "omg i'm losing again my stronger enemy but since he tried to kill the girl i love a misterious power growth in me with no reason and i can beat him easy now" if you know what i mean, most of the times the autor gives an explanation later of this hidden power but still...
But in this one you can see how and why the characters growth up, the scars on Tsukunes body are a proof of it, at least it's how it looks to me.

As i said, nothins new under the sky with this manga in terms on argument or genre but how the history go on has really mesmerized me, you can understand how and why the caracters become strong but btw take in mind i'm reading the Season II so i'm talking from a more ample perspective. The art is good but how this guy draw the face expresions is really awesome for me.

I'll give it a 8 but for sure it isn't a objetive rating cause is like this manga was done just for me, like if i told to the author what i want and how. In fact i was about to rate it with a 9 but since the first season is a little repetitive and doesn't shows so much of the plot will leave it with a 8. But for sure if season II has a good ending will get a 10 from me. Of course it's my opinion...

Peace and sorry for my bad english.
Was this comment useful?  Yes

The typical shounen romance.
by Rhadaze
April 21st, 2013, 8:47pm
Rating: 8.0  / 10.0
It starts off bad. It actually seems like the mangaka thought this would end soon so he didnt put a lot of effort in it. Good thing though that it grows a lot as the chapters go. By season two the writing gets sooo much better.
Character development sucks though. The author develops the two main characters, leaves the rest at superficial level, and with that destroys possible tensions between the characters.
Though even with some flaws and lack of development, I really love this manga. It's one of those reads thats not exactly a masterpiece, but thats very enjoyable.
Was this comment useful?  Yes

ris review. .
by shmigelpuf
March 18th, 2013, 8:54pm
Rating: 6.0  / 10.0
hmm. . This manga has a bit of issues. . Maybe Because It doesn't take itself too seriously in a sense that the world it takes place in feels like it has little substance. . The monster academy isn't explained well. . monster students try too kill each other for some reason, isn't the purpose of going to school is to make friends and get along with each other?. . The setting is just wrong in this manga in my opinion. . If your going to make a fantasy manga, the "world building " or "Creation of the setting" is very important. . if its created half halfheartedly you get this. . if you plan it we.. you get something like. . magical world in negima, the mystical tower in the tower of god. . or Amerstris the setting of fullmetal alchemist. . Character development is ok. . Some relationships with the girls is a bit shallow though. . It's a fighting manga there are a lot of fights. some are cool others are so-so. . My verdict is. . . . . . . . Its a good read, no alcohol required. .
Was this comment useful?  Yes

first of all you don't understand manga unless you read it in Japanese.
there is no complains about dialog esp. fighting ones, because English doesn't have the ability to convey "feelings" in Japanese translations. I say it as someone who have learnt both English and Japanese as second language.

Anyway, there are several flaws that made me enjoy it less and less as I went on. The first being THE LACK OF COMMON SENSE. The main cast keeps saying to each other "We'll be friends forever!" But then one of them will then leave because "Oh, they don't understand how I feel!" or "I have to betray them in order to protect them!". It would've been okay once, but it happens in almost EVERY CHAPTER. And it always ends with the main cast saving the character that ran off with them saying, "They really are my true friends! I was so stupid to run off!" You'd think that somebody in there would get tired of all this betrayal that seems to happen all the time in their universe and say "Fuck you" to the main cast forever. But they don't because of what I mentioned before, THE LACK OF COMMON SENSE. The most highlighted of such case was Yukari in ch.13 where it was a part of character development and it was not nonsense at all.

Such statements, never saw any of them. Maybe its a part of English translation. Betrayal

I am 100% sure that I didn't see this word once. Running off seeking solitary when you are sorrowful is not being wise. indeed, it is LACK OF COMMON SENSE or maybe betrayal?

none of the enemies or situations that they go through seem to have a lasting effect on their lives, because as soon as they beat them, it's back to the women fighting over Tsukune exactly how they were fighting over him before they even met the enemy

We have 2 case here. first "piece a cake" especially early Moka fights. Well you don't except her to be tired after beating the enemy. Case 2: after an intensive fight. Well Here I dare to call you a complete liar. I did check the ending of every single chapter. firstly: in most of them the scene is changed which means "TIME PASSED". secondly: After fight we have a few case of female fights which I explain. End of ch.07 Yukari : IT WAS THE NEXT DAY. End of ch.09 Gin senpai: It was really funny (It was not even a female fight ). End of ch.19 Mizore : THE NEXT DAY cant be called a female fight. (The stalker). End of ch.26 THE NEXT DAY AND THE RIGHT PLACE (It was after Moka and Kurumo with cooperation beat the monsters and the next day it feels the right time to have a minor fight(as it is clear the are good friends in last scene))

Rubies Case: OK let me kill your mother and father while driving drunk when you don't even know what drunk "means" (you're a child). then give you to witch which hates humans to brainwash you and raise you. Isn't that enough for you? is that weird?

how there’s a barrier that’s supposed to tell the difference between humans and monsters and how it’s supposed to keep humans out, but yet Tsukune, Tsukune’s cousin, and Hokuto were able to get in

firstly:"Tell the difference between humans and monsters"? Never hear that.did you made it up? secondly: there is guy named "bus driver" who decides whether or not someone enter the barrier. Kyo chan case: refer chapter 36.

About the vampire weakness: "The Rosario seals the power of vampire" This is the "definition"of Vampire in this manga. If it doesn't match what is in your head it's your problem. Vampire here is THIS. the author defines it. Why don't you ask yourself "are the even vampires in japan? vampires belong to west".

for me it was serious enough as a harem and ecchi manga. It is not even a harem or ecchi if compare it to other mangas such as To love-ru.

Good
by booknik
November 18th, 2010, 9:34am
Rating: 7.5  / 10.0
You don't get into this series to read anything innovative or different. It's your typical blend of supernatural comedy. The ecchi is a little too conveniently (sometimes annoyingly placed), some of the tangent stories causes more eye rolls than entertainment; howbeit the main plot is interesting enough to grab my interest.