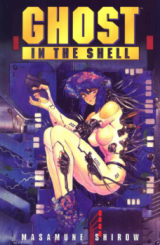 Its decent, not great...
by MangaGhost
September 3rd, 2012, 12:51am
Rating: 7.5  / 10.0
Love the movies and anime series. They obviously distilled pieces of this manga (and the second one, "Man Machine Interface") to make the movies and the show. However, its nothing like the animated works. In those section 9 and its members are more professional and the Major is always calm, cool and collected. The Major kinda starts off personality wise more like Deunan from the Appleseed manga (also from Shirow Masamune), though she does start to evolve more into the Major that we know and love. There's the typical manga goofiness that you find for humor here, which is absent from the animes. It is a bit disjointed and rough as it feels more like short stories that don't connect well together. The Major's acceptance of the Puppeteer's offer doesn't seem plausible as not much of a reason is given for it. It seems more impulsive than anything else, while in the movie both her and the Puppeteer were lacking something and would gain from each other. Its still an entertaining series and people who are not familiar with the animes might enjoy it more than those of us who saw the movies and shows first. It feels like a rough draft or blue print for what came later and for a fan that is interesting to see but I can't rate this a 9 or 10.
Was this comment useful?  Yes

hmmm
by mono-sama
July 24th, 2009, 6:59am
Rating: N/A
IMO, this is the only manga EVER that is actually worse than the anime that it spawned.
the mood is completely different... the story seems a bit disjointed. worth a read for historical purposes i suppose
Was this comment useful?  Yes

Excellent, involving manga
by PitylessEnvy
January 17th, 2009, 2:41pm
Rating: 9.0  / 10.0
One of the greatest manga I have ever read. A must read for anyone who enjoys sci-fi/philosophical manga.

Although, I have to admit that some of the story is a bit hard to digest at times due to all the different political parties and technologies that exist in this manga. But it certainly helps immerse you in a believable world. Also, I was a bit put off by the character designs, but once I got over that, I had no complaints.

All in all, a very enjoyable manga.
Was this comment useful?  Yes