Login to add items to your list, keep track of your progress, and rate series!
Description
In the near future, human technology becomes centered around Mystickers, or tattoo-like stickers which are placed on objects in order to use their abilities. But Mystickers can do much more than this, a secret only "Blazers" know. A secret Daichi, a good-humored teenager with an obsession for all things "cool," is destined to find out when he suddenly finds himself targeted by people who tell him he, too, is a Blazer... 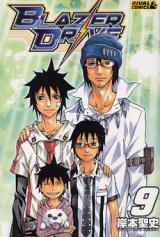 Blazer Drive>666 Satan
by MemeYakuza2019
June 20th, 2022, 8:58am
Rating: 7.6  / 10.0
This manga maybe similar to its predecessor but I think the story, characters(some), and premise of Blazer Drive is written better, the interesting power system is also another plus. The only bad thing I have to say about this series is that the plot started to get dull around the mid 20's and the unanswered plothole revolving around
Spoiler (mouse over to view)
the owner of the NEXT company Albert
.

please read the comment below me first, and...
by EminaLoli
August 21st, 2014, 11:44am
Rating: 7.0  / 10.0
I just finished the series and I just can't believe how can there be someone with the exact same opinion that i Have about this manga.
(That's why, please read Cuthien-san's review first to make mine short)
But I just wanna add something...

And it's ----- I think I can still give this one a 7 rather than 4 cause despite of all those "what the hell suddenly happened" and "where did this came from" part of the story, it still had a good concept in it.
Guess it just would have been better if they explained some things earlier on the story and made a continuation of it.

The story's plot went like : Good - Great - Huh? - what? - ok - wow . That's why it's a pity not having continuation when it just became good again ￣ω￣

Good idea. Poor execution.
by CuthienSilmeriel
June 4th, 2014, 1:57am
Rating: 4.0  / 10.0
The mangaka had a really good concept, and the manga started well, but about half way through he lost the plot a little. Things became too convoluted and random, huge plot holes appeared, characters started acting in a completely different manner for no reason. By the end I had no idea what was going on at all, and I didn't really care about anyone involved. This could have used at least another 100 chapters to build the characters more, and to take the plot at a slower pace. As it is, I feel a 4 is too generous.

Update: I stumbled across this again recently whilst clearing out some stuff and thought I hadn't ever finished it because for the life of me I can't remember more than the first few volumes. Not really a good sign. It's a shame that such a unique idea was so poorly written.

Good Concept
by SSJR2
June 13th, 2012, 11:53pm
Rating: 8.0  / 10.0
i honestly feel like the concept was really good with the stickers and weapons but the story was a little lacking in my opinion but this manga did have potential and to me it had more potential them 666 Satan to go far but just like his previous work he just let things go out of control and lost it. i think being overshadowed by his brother, trying to be different from him, and trying to be as successful as him is waying on his work witch sucks cause his art skills and concepts are really good, i hope he makes another manga that he puts his all that will naturally compete and/or surpass naruto
Was this comment useful?  Yes

Its Good
by sanji134
January 27th, 2011, 12:04am
Rating: N/A
I like a lot of shounen manga and i believe that this manga could go very far. there are to little release when it comes to chapters though. to wait a whole month just to get to the next part which may or may not be a chapter even pertaining to the main charachter Daichi is just ridiculous.

There are right now 25 chapt out and it is very original. This story line though i have to say has alot of gaps in it. I mean we come to the pink paradise part in which he meets Shiro again. Shiro is all depressed because of his partner gettin tooken away by some guy we havent even met yet this far into the story. There should be somewhere some kind of side chapt or story in which shows a fight and how the partner got taken. The black sword dude also lost to this guy and he was a good fighter yet we dont see any type of fight in them. another big gap is the beast man. he shows up and fights as if he supposed to be some kind of main villian and leaves without being completely defeated, but after he leaves he never shows up again. They completely jumped the track in which they were headed.

If anything he should make a side manga about Shiro(because of all the gaps he made in the series). But the problem in doin that is that its to much work so side chapts about Shiro would have been the best bet for him but now its to late. Even Naruto had side chapts to tell whats goin on in Sasuke's life.

Some of u people think that this idea is to closely related to 666 and Naruto. well there is a reason for that. 666 was made by the same artist so naturaly he going to know what he likes in a manga in put it on paper. Well thats what he did with both of these manga. What he likes drawing is what he is goin to draw and most likely his idea of a good manga isnt goin to change.Every one likes some quality in the manga they read so most likely alot of manga one reads are similar in some way. Same goes for drawin.

As for similarities in Naruto. the two who made the mangas are brothers twins in fact. They may just like the same thing and not only that but i bet they share ideas with each other on a daily basis. Maybe there was a good plot some where in the story of Naruto and they talked it over so that it fit into Blazer Drive's story line.

All artist are inspired in some way to persue a career in art. So naturaly they are goin to want to make art similar to that in which they were inspired by. This is just going to say that there are alot of similar manga out there but you cant just judge negatively one because it came out later than others.

Too predictable
by hivemind
January 5th, 2011, 7:11pm
Rating: 7.5  / 10.0
This manga sounds a lot like 666 Satan. Where you have a goofy, novince, yet determined protagonize. Also, there's a girl that likes him, he has a sensei, a foe that would soon later become a comrade. The only difference is that this manga is about an awesome, glow-in-the-dark, stickers. (jk bout the glow-in-the- dar)

don't delete.
by meosnelsity
December 27th, 2010, 5:51pm
Rating: 7.0  / 10.0
It's just my opinion. If the author had tried different genre, for example, romance not shounen, he could have achieved far more success (of course, concerning his drawing skills) than right now. I am telling you, this one wasn't bad, but there are giant ones out there leading whole manga laypeople on the planet while all this manga doing is just following their steps. So, it does so little to us.

interesting
by sweetnsour321
November 29th, 2009, 8:51pm
Rating: 8.5  / 10.0
quite interesting..different from naruto and 666 satan.(when I read it i have a feel it has potential to become popluar..its just missing something..) I think its a fun read..I mean where in the world will you find a manga using 'stickers'

It's a good series
by artedeco
May 10th, 2009, 10:00am
Rating: 8.0  / 10.0
While it won't challenge for best manga of all time, it's really entertaining and enjoyable. The characters are interesting and the story is going places. As for comparisons with 666 Satan they are inevitable they are by the same mangaka. Similarities to Naruto are just few, aside from brother conflict, fighting against an antagonistic organization, and rivalries(which are stables of shonen in general not exclusive to Naruto) nothing is similar.

Not very different from Satan...
by Pandy91
January 30th, 2009, 10:31am
Rating: 9.0  / 10.0
Hopefully Seishi-san will take the story in a different direction from 666, although the characters are nice to look at. ;3
Seriously, the general plot and characters are very similar to 666 Satan, I'm looking forward to seeing if this manga can try to be original.
Was this comment useful?  Yes