Login to add items to your list, keep track of your progress, and rate series!
Description
Train Heartnet, also known as "Black Cat," was an infamous assassin for a secret organization called Chronos...until he abandoned that cold-blooded existence to live on his own terms as an easygoing bounty hunter. But is Train's past as far behind him as he thinks? 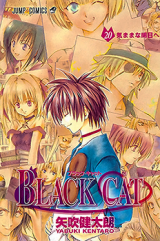 Note: You must be logged in to update information on this page.
Forum Posts Click to view the forum
YABUKI Kentaro black cat question
over 6 years ago
Is their a possibliaty of more chapter or volumes?
over 6 years ago
How much of the manga does the anime cover?
over 13 years ago

Good, but...
by monkry
October 10th, 2014, 5:33am
Rating: N/A
why is that I feel towards the end, the deus ex machina plot suddenly like, thrown here and there? I've watched the anime and tried to read the manga because I found the anime interesting (and also because I remember wrongly, I thought the anime only reached some point in manga...) tho.

I like Black Cat cause it used a pretty interesting set-up where the main chara is not a useless brat at the start, and I like Train's heavy background pretty much. While all the element feels pretty nice along the way, but I felt that towards the end, it's so... yeah, dunno.

Anyway, it's still good, ...especially if you haven't read too much shounen.
Was this comment useful?  Yes

By far, Kentaro-sensei's Best work.
by hawkeye312
August 19th, 2013, 1:46pm
Rating: N/A
First series I picked up by Yabuki Kentaro, I was impressed with the art, storyline, character development, and progression. I am still waiting for a sequel, so I can see more badass train and Eve. However, I think that is a bit of a stretch.....PLEASE COME BACK.
Was this comment useful?  Yes

IIRC, from 03'-04'ish
by MatrixM
February 6th, 2012, 6:10pm
Rating: N/A
I was reading this series when my brother introduced me to Cowboy Bebop. It soon became obvious that Black Cat pretty much completely ripped off Cowboy Bebop's story for the first few volumes. Because of this i didn't bother to watch Bebop [probably a mistake]. Also, this quickly got boring for me so i dropped it.

Anyways, if you've seen Bebop just be aware that you'll be reading repeats for a while with this.
Was this comment useful?  Yes

just ok
by alexj2936
May 26th, 2011, 7:29pm
Rating: 6.0  / 10.0
It was an ok read with some good action scenes, but it really annoyed me that the main character is a freaking assassin and won't KILL anybody!! If I got paid $1 for every time I wanted to smash my computer when he went on one of his "I won't kill because of blah blah" I'd be rich. Other than that I'd recommend it to any shonen fans
Was this comment useful?  Yes

Personally I haven't found many Shounen series that jumped out at me. This Shounen Jump series I think is more refreshing. The first bounty hunter themed anime I saw was Cowboy Bebop. Black Cat is quite a big better than that. The characters were all interesting, especially the Chronos characters and the Apostle of the Stars.

The story starts a bit differently in the manga than in the anime as the manga starts when Train is already teamed up with Sven as opposed to where the anime starts off before Train discards his "Black Cat" title.

I thought the anime background music was decent but not top notch, and I find Japanese voice portray the characters better than dubs. This is just my preference though. I'm also studying Japanese so hearing the seiyuus somewhat works as translation study for me.

Everyone's taste is different so best to check out a few chapters or episodes and se if it's your style.
Was this comment useful?  Yes

meh
by PoshSam
December 6th, 2009, 4:30pm
Rating: 5.0  / 10.0
it's cool in a way, especially train, the guy's got some neat style and really cool powers, but i swear him and his sidekick have a cliched relationship, you know good cop bad cop sort of thing.
i felt throughout like going, 'stop with all the sarcastic remarks towards train, you're such a cliche and that's not funny'.
this is one of those mangas where you wouldn't care when a new release would be out and would probably be able to predict the ending, since i never finished it, i bet train and his sidekick have a good laugh as they face more jobs for them, oh and itty-bitty romances for each on the side.
Was this comment useful?  Yes

classical shounen
by pxhai
May 28th, 2009, 2:39am
Rating: N/A
What surprised me the most is that there's no ecchi stuff in this manga.
All the heroes are not perverts, unlike most of manga today

. It was ended abruptly though, many characters were not used. Hope to have a sequel
Was this comment useful?  Yes

:(
by robbit
May 4th, 2009, 5:00pm
Rating: 7.0  / 10.0
im sad. i had this on hold for like a year and never read the last chapters. im so sad. i hope there will be a sequel.
i think this deserves better than what i gave it but there were a lot of useless chapters in the middle and the last part seemed to drag on a bit
Was this comment useful?  Yes

Eve was much more interesting
by bignort
March 17th, 2009, 2:46pm
Rating: 7.0  / 10.0
This is the first manga I have read that they main character was not nearly as interesting as the side characters. Eve was by far the most interesting person in the manga, and got way too little time in the series. Not the worst manga by far, but could have been much better.
Was this comment useful?  Yes

There is nothing wrong with being generic
by kaloo
February 17th, 2009, 5:23pm
Rating: 7.0  / 10.0
Having seen the complaints about this series I think they're nonsense. I often find myself wanting to read a generic shounen story. This one is a great example of that. While these stories will never find a place as the Best story ever or anything they are still quite entertaining.
Was this comment useful?  Yes