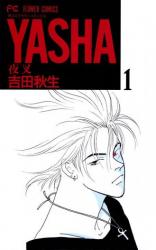 The story is mainly about human experiment and virus and really similar with COVID-19 situation except no one wear mask lol that's why I recommend it for you who like science fiction.
Some of the story pattern is similar with Banana Fish so I think you will enjoy it if you also enjoy Banana Fish.

One of the charming point is, you will explore the bond between twins and I think bond between them is so unique and no one can share the same bond as them in this world.
Was this comment useful?  Yes

Good but not amazing
by Zazie122
October 24th, 2018, 12:34am
Rating: 6.0  / 10.0
I didn't find this as gripping as Banana Fish, but it was still a decently written story and tied up loose ends well. The science aspects of it seemed a little bit far-fetched but I don't know enough about science to really understand how accurate it is, lol. I know it's based on reality but eh it's sci-fi. Who knows, it might have been accurate back in the 90s.

None of the characters really interested me other than the twins, kinda. I think I enjoyed Rin the most.

It's not bad, and it's worth reading if you enjoy heavily scientific stories. Still a decent read overall, even if it is a bit dated.

Also, I would almost recommend reading Banana Fish first, as a couple of characters appear in Yasha and their stories won't make any sense unless you're familiar with them.

For those curious as to which BF characters show up and what they do:
Spoiler (mouse over to view)
Sing Soo Ling shows up as part of the Chinese mafia dealing with things in Japan, and there's talk about how he took over the American Chinese mafia from Lee Yut Lung (who, by the way, was apparently assassinated a few months into Yasha's story). It's also mentioned that Sing married a Japanese woman 10 years younger than him, who is probably Akira -- Ibe's niece who appears in the epilogue of Banana Fish. Lastly, Sing talks about Ash briefly, but doesn't mention him by name.
Was this comment useful?  Yes

this is THE GREAT ONE
by no_one
December 20th, 2010, 7:14am
Rating: 10.0  / 10.0
this is very very great story. I love it so much. it made me couldn't stop reading it till finish. With conflict, action, and very complicated feeling between two main character, Sei and Rin. I can't describe this story well, it's very complicated but it's great.
Was this comment useful?  Yes

Yasha's good stuff
by Revelmonk
August 15th, 2009, 6:39pm
Rating: 10.0  / 10.0
3 chapters out so far and I like how the main character isnt all depressive or psychologically twisted even though so much has happened to him. I am really looking forward toward more.
Was this comment useful?  Yes

One of the best manga ever created
by Yuenchi
July 23rd, 2008, 2:52pm
Rating: 9.5  / 10.0
Science-fiction, action, drama... Doesn't sound like my fav manga but this is definitely one of the best manga I've ever read (and I've read much more than appropriate), and it's indeed one of my most favorite even after years. This manga may not have the best artwork (in fact I don't like the artwork) but it has everything else in spades and more. It's deep, it's exciting, thought provoking, touching, it's amazing. A superb work of Yoshida-sensei.

One of the best manga. Enough said. Read it.

I strongly suggest to skip its sequel, Eve no Nemuri, though.But I bet you wouldn't be able to, once you finished Yasha.
Was this comment useful?  Yes