Login to add items to your list, keep track of your progress, and rate series!
Description
"Basara - The spirit of freedom which denies old authority, transcending traditions and customs." Born under a prophecy that will liberate and unite Japan, Sarasa has had to take her brother Tatara's place as the "Boy of Destiny." Fighting for the oppressed, Sarasa journeys across Japan to gain allies and defeat her enemies--all while keeping her identity a secret.

Note: Basara won the Shogakukan Manga Award for shoujo in 1992. 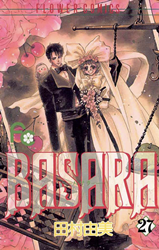 Note: You must be logged in to update information on this page.
Forum Posts Click to view the forum
Basara's ending
over 8 years ago
what is the meaning of BASARA btw??
over 10 years ago
is it worth reading?
over 11 years ago
ending and spoilers
over 12 years ago
Sasara's Mother
over 13 years ago

Excelent
by Shimma
November 27th, 2020, 7:34pm
Rating: 10.0  / 10.0
There's plot, character development, and an a main couple with so much chemestry.
I specially like the main character: the author knows how to despic the inner trouble our MC went through: She had to be Basara, but she also wanted to embraise her feminine side, be a normal girl. Her growth is amazing.
Was this comment useful?  Yes

My entry to the manga world
by ayaneninja
October 14th, 2020, 7:50pm
Rating: 10.0  / 10.0
Basara was not only my first manga, but also solidified my love of shoujo manga in a quick one-two punch. I have extremely fond memories going to the library as a young teenager and getting volumes of the series to experience. The story is iconic, and filled with emotion; Basara will take your heartstrings for a ride you will never forget. Sarasa is one of the most strong willed characters I have ever read in a story, and many other characters share the same characteristic, especially Ageha. The amount of heartache, sacrifice and endurance on display from both the protagonists and antagonists (with one of the most iconic love stories in manga) moves this story from great to masterpiece. The characters are some of my favorite in the medium, and are fleshed out better than most real life people are. Pick up the first two volumes and just get a glimpse of what this epic tale has to offer and see if it hooks you the same as it did myself and many other manga fans around the globe.

If I had to recommend just three series for someone just getting their feet wet in the manga world, this would definitely be one of them.

An absolute masterpiece
by MermaidAiera
February 26th, 2020, 12:23pm
Rating: 10.0  / 10.0
I'll begin this review by stating that I'm wildly biased in awarding it a perfect 10. However, I do recognize that there are various flaws that make this manga not for everyone. Despite these shortcomings I feel that the incredible impact the rest of the work has as a whole far outweighs and goes so far as to negate them.

Basara is an award winning classic for a reason. The story is compelling. The characters are multi faceted. The attention to side characters is astounding--so much that even characters we've known for one or two chapters can make an overwhelming impact both to the plot and emotionally. The themes explored are deep, heavy, and complex. They are also skillfully explored and executed in a way that moves the reader and makes a significant impact. Odious characters that were once abhorred are humanized; like the characters, readers come to assume a grudging respect for them, even mourning with them if misfortune befalls them. The author clearly highlights right and wrong, but paints a picture of a coin with two sides that also has a moral grey zone. The entire story highlights sacrifice, redemption, desperation, destitution, ruination, and the process of navigating, overcoming, and healing through these things.

And all of this has boldly withstood the test of time.

Basara is also for mature audiences. Although it already has the power to command readers' emotions, it requires a degree of empathy and understanding of the hardships of life and difficulty of navigating complex social problems. At times it rips back the skin of political, emotional, and ethical problems and rawly exposes the deep hurt that fuels the misunderstandings and perpetuates the issues at hand. Every time I re-read this work, I find I'm relating to it more and more. And seeing how the characters live out their lives in such trying times and situations is beyond motivating and inspiring.

I think the most life-changing aspect of Basara is that throughout all the deeply relatable themes it explores, it offers a solution of love and forgiveness. Not your typical shoujo style of obstinate friendship conquers all--love and forgiveness that is quietly settled on through grief, suffering, loss, and tenacity.

Say what you want about the art, the pacing, some unrealistic plot points, or even some of the characters. This manga is undeniably the heavyweight champion of epic stories that have the power to profoundly affect the reader.


tl;dr - This manga is absolutely incredible and I highly recommend it. It is for mature audiences though, and if you're not someone looking to get emotionally involved in the story and explore incredibly deep themes then it may drag on. It's not some romantic adventure--it's a heart wrenching life story. So if that's your cup of tea then please, buckle up and enjoy it.
Was this comment useful?  Yes

Started promising, became boring and ended up predictably
by AndelMartina
November 17th, 2019, 8:05am
Rating: 7.0  / 10.0
That's how I'd sum this series up. It started quite well and I found myself unwilling to stop reading. After a few volumes (around the middle - vol. 15 or so) it started to become really repetitive and boring. The ending was a predictable "happy ending". The MC is a bit annoying, being strong and weak the next moment, it was like a horrible emotional rollercoaster, but instead of sympathizing with her it just made me angry 😀 Could have been a good series, but has its flaws. The style of drawing is fine in my opinion. Still recomend for reading, if you have the patience for it.
Was this comment useful?  Yes

Engaging Adventure
by CCheshire
August 19th, 2019, 10:39pm
Rating: N/A
I recall looking at the series for a while but I was initially put off by the retro art but the manga-ka improved a lot and it ends up being very unique.

Sarasa is a great MC as she starts out as an avg girl who witnessed tragedy into wise and capable leader of the rebels. I liked how she wasn't the strongest fighter and relied on other strategies to win her battles. Also, she still is a believable teen hero vs someone who would end up super jaded from her exp. She remains true to her goals even if it meant separating from loved ones.

I do have to say that their romance does felt a bit rushed since I swear they met like 4x. Also, I'm glad they didn't have any strange love triangle problems.

Spoiler (mouse over to view)

Aegha... leaving her alone on that mountainside during her breakdown is a terrible idea like why. A lot of the times I kept wondering like what's his deal then he died w/o giving us much of a clue.

I'm still on the fence if I liked the ending or not. Since Shuri lost his arm and now Sarasa are both traveling together vs running the country. I get it as works as a conclusion but I kinda wanted them to actually govern Japan together instead of just leaving it to everyone else.

A enjoyable surprise despite its popularity
by Shellshock
March 26th, 2019, 1:21pm
Rating: 10.0  / 10.0
Maybe calling it a surprise might be a bit much considering that this is one of the most popular manga ever but it STILL took me by surprise
Was this comment useful?  Yes

Amazing
by sayhelou
January 4th, 2019, 1:18pm
Rating: 10.0  / 10.0
this manga is one of the best i’ve ever read! the art in the beginning can bother a few, although i loved it from the start lol. Anyway, everything is well-written and i couldn’t find a good story like this in a while for now. Strong and captivating characters, good romance, no unnecessary drama! 10 today, 10 tomorrow, 10 forever for this!!! give it a try even if the beginning is a bit slow paced.you certainly won’t regret it later.
Was this comment useful?  Yes

Basara is just so great. Adventure. Novel Situations. Romance. Angst. I'm always looking for another shoujo/josei adventure with the same kind of adventure and romance, but they're so far and few between, and I haven't found anything else that hits the spot quite like Basara.

For anyone looking at this comment that hasn't read Basara yet, you're really missing out.
Was this comment useful?  Yes

One of my all time favourites
by PZcolo
September 2nd, 2017, 6:39am
Rating: 9.5  / 10.0
This one easily enters the top 3 in my list and fights for the first place, an amazing work, 27 volumes and its finished! Tough to measure up against it and few can in my eyes.
I'll write a review if I ever re-read it since I read it at least 10 years ago, I found there is a "new" high quality scanlation and started downloading it only to notice I had not written anything here.

Third time's the charm
by XileDragon
July 15th, 2017, 3:21pm
Rating: 7.0  / 10.0
I finally finished the manga on my 3rd try. I couldn't get into the art the first 2 times and dropped it after a couple of volumes right before it got into the epic moments. What a mistake that turned out to be.

Basara is simply one of the most beautiful, epic and touching story ever told in manga. A story about a girl so fragile yet so strong, so naive yet so mature, and above all, the story of how she captivated all those around her with her unbelievable charm and spirit. Many female led adventure epics seem to end up with a male co-star to stand by her side as equal, but not here: Sarasa stands alone and all others are only witness to her incredible story of loss, growth and ultimate vindication. That isn't to say that there isn't romance, in fact the romance is a central part of the plotline, but Basara is above all the story of the struggles of war and nation building, brought together by one of the strongest girl character ever found in manga.

Basara is not a manga without its faults, as it suffers sometimes from unrealistic plot twists, too many characters, and overly annoying behavior. Yet all of this is secondary to the author's unbelievable way to draw the audience into Sarasa's life, feelings and growth. After reading hundreds of manga over more than 12 years, this is one of the greatest. Basara is a manga that has it all: the adventure storytelling of Red River, the unyielding character spirit of Skip Beat, the closure of Toyko Crazy Paradise, and finally the raw emotional impact of Onani Master Kurosawa.