Login to add items to your list, keep track of your progress, and rate series!
Description
From Horobi no Michi:

Clockworkers- mechanical men, created during the war as a weapon to kill as many as possible. That war may be long over, but rogue Clockworkers are still roaming about, spreading fear and death wherever they go.

Machina's a member of the CWA, an organization dedicated to the destruction of these rogue robots.

Along with Deus, her Clockworker partner, she travels the country in pursuit of these dangerous robots... 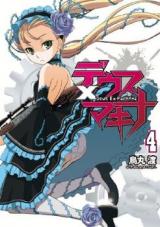 machina's bad ass
by elixia
January 16th, 2011, 2:12am
Rating: 9.0  / 10.0
this series is totally awesome. i like the art - although machina reminds me a bit of mina tepes from dance in the vampire bunds - i like the story, and most of all i like how bad ass machina is. too bad the release is kinda slow ~.~
Was this comment useful?  Yes

As of ch15 this feels like it'll be a generic Shounen manga. If it were a meal it would be burger and fries. Tastes good enough but is nothing special. If you're interested in a generic Shounen with a Loli fighting Robots and a wussy shota whining about wanting to be stronger; you've found your manga. If you're looking for a manga with some outstanding feature; keep looking.

A little on Edge
by Crowmanhunter
October 11th, 2010, 12:40am
Rating: N/A
I've only read the first chapter, and just from that I'm pretty solid I'll probably try and finish this manga. However, I can't help but get a little deterred by the fact that the female protagonist looks like a child, and is apparently the source of fanservice.

Seriously, is no one else bothered by this? Or am I just the only one who sees it?
Was this comment useful?  Yes

So, straight to the point, this is one heck of a badass manga... I really don't know why it lurks around the shadow of other manga, heck story is really good. Action scenes are great, plus of course the main attraction for this series was the main protagonist, Machina. Kinda bitchy but that was her bright side.

Not gonna lie...
by Anabiotic_Pineapple
November 19th, 2009, 11:24pm
Rating: N/A
I started reading this because the cover is hot and I'm a sucker for stockings and foot shots....All of that aside though, the story is pretty good. I haven't been feeling it for all of the characters introduced, but the premise is strong and the main character is ruthless, which is always a plus in my book. In the interest of being objective though, the relationship between the heroine and her "clock-work" companion is a lot like edward and al from Full Metal Alchemist.