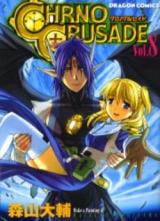 Note: You must be logged in to update information on this page.
Forum Posts Click to view the forum
which couple do you prefer??
over 9 years ago
Watch Anime or Read Manga?
over 11 years ago
Ending
over 13 years ago
Best Chrono Crusade Scans
over 14 years ago

Good, but that ending...
by Seregosa
July 21st, 2017, 5:44pm
Rating: 7.0  / 10.0
Yeah, I remember reading this many years ago and it still somehow remains in my memories. It was a great read, granted I hadn't been exposed as much back then to the world of manga, novels and anime as I have now. I mean, I even think I remember borrowing it in the library and reading it and back then I was restricted to just the most popular stuff because of it.

However... That ending brought it down from a 9 to a 7. I hate things that make me cry, I don't find it pleasant at all to be overcome with emotions of sadness, some people seem to love it, but I'm not one of them. It left a gaping hole in my heart for a while after reading it, perhaps that's why I still remember it so vividly.

Some people think it's good to end with the mc dying or something, to give that "ah, it's all over" feeling, perhaps it's good closure? But no, just no. I want to imagine they still have their whole life ahead of them, going on with their merry adventures and not being in a freaking grave. There's nothing I hate more than a definite ending with no future possibilities. I mean, who the hell wants to be told "Hey, the character/characters you came to love died from old age, mwahahaha, not to mention the two of them didn't meet again and she grew old by herself" when you're already sad about the story ending? At least give us a happy "lived together, grew old together and had a happy life", or make both immortal or both mortal, shit. Yeah, if you read this, you need to prepare yourself for a sad ending before you read it.
Was this comment useful?  Yes

Great manga, good anime!!
by Umi389
December 9th, 2015, 3:42pm
Rating: 10.0  / 10.0
I watched the anime first and although I loved it, the ending just ruined it. Where'd my happy ending go?? So when I started reading the manga, I was secretly hoping for something better, and boy, did I get it. The ending is completely different from the anime which is why I highly recommend reading this!!!
Was this comment useful?  Yes

Worth a read
by sakirol
July 24th, 2013, 5:43pm
Rating: 7.5  / 10.0
The plotline isn't amazing (overdramatic apocalypse ... pretty overdone), but the characters make this series worth it. The best part is that this manga has a wholesome ending fit for the well-developed characters (unlike many others that end up dragging on and on).
Was this comment useful?  Yes

It was ok....
by markdarkangel
June 26th, 2011, 11:12am
Rating: 5.0  / 10.0
I guess I had greater expectations for this manga but sadly it did not live up to them, and I found myself just wanting to finish the manga just to get it over with. The story was bland and so was the mood but the redeeming factor I guess was the characters, they grow on you. In any case, not a bad manga but not great either.
Was this comment useful?  Yes

Spoiler (highlight to view)
they died happily. The saddest part for me was when chrno froze rosette, but too bad it didn't end shortly after that.

the anime sucks, do not watch!
Was this comment useful?  Yes

...but I'm so glad I did! It was so touching and heart-wrenching at times. I loved it.

This is the kind of manga that lingers for days after you read it. In my case, there was a good amount of tears involved.

One of my favourite
by TheAlmighty
March 30th, 2010, 7:28am
Rating: 10.0  / 10.0
It's the romance that killed me. It's subtle throughout the series and the end was heartbreaking. I could not stop crying at all. The best thing about the manga is the relationship between the two main characters. It is simply beautiful. It's the personification of love unsaid but understood I'd say.
Was this comment useful?  Yes

Loved it!
by g0d b3rry
February 18th, 2010, 12:24am
Rating: N/A
This is one of my favorite manga and anime! The art isn't overdone. The story never feels like they're trying to drag it out, so its never boring. The relationship between Chrno and Rosette seems a lot more believable than most manga. I like Rosette's strong personality. She feels more like a real person than most heroins, and Chrno is very well developed as well! I really can't think of much that I could possibly say as a con for Chrno Crusade... The ending works well with the manga in both the anime and manga.
Was this comment useful?  Yes

Just...wow
by imp4ever
November 10th, 2009, 4:47pm
Rating: 10.0  / 10.0
This manga brought tears to my eyes more than once. It was very deep, complex, and just plain un-simple. The emotions felt very real to me, real enough that I'd cry tears of sadness at the happy parts and tears of joy at the sad parts. And I don't cry unless something really gets to me.

I'm not gonna say the basic plot idea is ingenious or anything. I mean, a demon who's in love with a nun. A chick who's life is slowly being sucked away. Yeah, sure, heard it all before. But it's presented in a very amazing manner. Thinking about it, there's enough drama and angst to make it seem like a rather dark story, but it still seems to me light-hearted. I think it's the lovely blend of the two that give this manga it's charm. Not to mention, I don't think any of the characters were two dimensional! Yay! Heehee, but yes, I definitely recommend this read. But not if you can't stand sad things. But I do promise, it's worth it all the same.
Was this comment useful?  Yes

just right!
by Da Red One
September 30th, 2009, 7:57pm
Rating: 8.8  / 10.0
this one was just about perfect...Rosette wasn't sappy or wishy washy, a very strong lead....and Chrono...wow...big or small he managed to convey that "tormented soul" feel...the end was bittersweet....but it fit so well i couldn't be mad at it it was just so right...i really want to know a bit more about Chrono's past, too. also the romance wasn't too heavy but not to light either...it was believable! and in the end everything came together beautifully...