Login to add items to your list, keep track of your progress, and rate series!
Description
"I love dogs. You can train them to do whatever you want." Yuma has a cute face but a dark soul, and he's grooming his older boyfriend Kenichi to be his puppy! Yuma takes advantage of Kenichi's infatuation with him to collar him and train him like a canine. But, what is Yuma really after...? In this relationship, it's the bottom who's really on top! Here's the first installment of "Love Me Hard!", a hit series that turns age-gap power dynamics upside down!!

Translated with Love by Renta!
https://www.ebookrenta.com/renta/sc/frm/item/139251/ 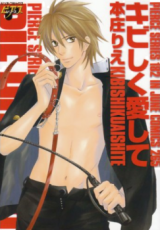 So-so
by forsteye
August 14th, 2017, 3:47am
Rating: 4.0  / 10.0
This could be better, really. They could explore the S&M more. This just felt half-hearted in story sense. Somewhere in the middle of reading, I wanted to drop it because I was bored lol.
Was this comment useful?  Yes

Haha that was.. unexpected
by OmNom
April 19th, 2014, 2:51pm
Rating: N/A
So I picked up this manga knowing full well it was going to be about a SM relationship, even more so that the uke would be the dominant one. Still, I gotta say there were bits and pieces that I didn't see coming at all, and somehow I think that I actually enjoyed this more than I thought, lol.

Truth to be told, I've never truly been a fan of Honjou Rie's lovey-dovey stories and 'conventional' sex (like mentioned in the manga), so I came across this work of hers without much expectation in mind. Thus it really surprised me that she could draw some fine smut! xD
And because all the stories here mostly revolve around sex, I found them much more convincing and easier to swallow, so in the end there was no such dissatisfactory remnants from typical BL love stories that I usually feel. The mangaka's artwork is quite enjoyable as well, and I do like the humour in here and there.
Was this comment useful?  Yes

Every middle-aged, masochistic seme's dream
by Namiya
January 23rd, 2013, 6:46am
Rating: 8.0  / 10.0
I found the title story to be fun. It's a nice change to have a sadistic little uke who knows how to play the seme because most of the time, it's the semes just taking whatever the hell they want.
It's nice little story and very smutty indeed. I'd only be careful if you either don't like threesomes or if you are looking for a story of pure love.
But since men like to think with their dicks, I'd pretty sure any sane seme would love to have this happen to them! lol.
Don't expect much of a plot here, it's sort of random and all but it's clear that the smut is the major point here.
I did enjoy the oneshot at the end, and if you like Pretty Woman type stories you'll like it too!
Was this comment useful?  Yes

Pfft
by Chryza
January 4th, 2013, 1:12am
Rating: N/A
After one chapter, I could barely stop laughing, and decided to drop it. It really doesn't seem like the type of manga to have any substance in the end. Check the categories to see if you'll be into it, perhaps? Although it feels like anyone will at least laugh a little bit...

The Title Story
by landbound
August 27th, 2012, 12:10am
Rating: N/A
Was a little disappointing. I didn't mind the length up until the end, because it really lost its charm when it started playing Yuma's character angle a little too seriously. It was a lot more entertaining when it felt like Yuma's power play was mostly in his head, and that what actually went on in their sex life was more glorified roleplay where Kenichi was willingly submissive, but not "groomed".

I'm not being generous when I say that, because that's what was there, and it was what made the story work. After a point that changes, and the character dynamics and the sex begins to drag and unfortunately go stale.

Love Hounjou's art, as always, but I felt like manga went from being fun and maybe even a little refreshing to just feeling like a disappointment. Also, if you're looking for actual S&M themed manga, I would suggest passing this by. I like how Honjou tends to touch on S&M themes without delving too deeply into them (or yaoi's weird version of them, anyway), but if that's your kink, this will probably not do it for you.

Disapointing
by Sasageru
May 20th, 2011, 4:55am
Rating: 7.0  / 10.0
I was a bit disapointed D: when i read the description i was quite excited to read this, it sounded like alot of fun. But as it turned out it was sort of... mediocre i guess? I wasn't hooked, it wasn't very interesting for the most part. Except for the smut scenes theres nothing that keeps the story rolling, it just sorts of plods along. The art is ok but the story isn't that good and the characters are a bit superficial, no depth to them at all really. 7/10 is the best rating i felt comfortable giving. Its an ok read to pass the time.
Was this comment useful?  Yes

superficial, flat, boring
by pleochroic
April 6th, 2011, 3:25am
Rating: 4.0  / 10.0
this fails for me on several levels: as porn -- it doesn't even remotely touch actual S&M after teasing about it, and the sex is very repetitive, too censored, and, frankly, the opposite of "hot", because none of the ingredients are present that make sex hot for me -- in the absence of characters in whom i am emotionally invested, and who are passionate about each other, i want to see lots of foreplay, unusual viewpoints, and close-ups of interesting bits. the manga also fails as story, because it basically has no real plot. and it fails emotionally because there isn't enough to be seen of the characters for me to care about them. heck, i don't even know whether the kid cares for the man.

i like that the uke tops; that's sufficiently different to get the manga an extra point. it's mildly comedic because the uke leads the seme around by the nose and the seme has no clue, but i don't think i actually cracked a smile. honjou's art is competent enough, but there's nothing special here either. i am downrating it quite a bit because if even the smut doesn't succeed, there's no point at all. the only redeeming thing is the oneshot "happy boy", that actually has a little depth, and the sex is more inventive.

Too Long; Title Story Only Needs 2 Chapters at Most
by MightyMaeve
February 26th, 2010, 2:31am
Rating: 5.0  / 10.0
This one wasn't to my taste. It's mostly smut with a mildly manipulative young boy and a eager-to-please, devoted older man. It isn't really s&m at all, other than a few surface aesthetics.

The story was fine for a light, silly story, but it just felt uncompelling as it wore on. I didn't really care about the characters, nor did I feel the uke really cared about his seme. I ending up flipping through some pages of mostly unemotional, repetitive sex. It was just too long of a story for the limited content.

The art was smooth and competent. Honjou Rie's talents lie in her more serious fodder, in my opinion.

The extra, Happy Boy, was predictable and sweet. It was similar to Love Me Hard, but it had a more likeable uke. I liked this one a bit better because it was designed as a short, uncomplicated story and it stayed short, unlike Love Me Hard.

likewise, you won't be disappointed with sensei's art. it's always been great. pure eye candy.