Login to add items to your list, keep track of your progress, and rate series!
Description
Volume 1:
1-3) P.B.B. (act 1-4)
Junsuke is the number one companion in a host club where Shinobu used to work. They have been in a relationship for a year, but as they start to get serious, Shinobu questions his commitment. The story continues from where act 1 (chapter 4 of Gaten na Aitsu) left off. (features Maki Motoharu from Punch Up)

5) Gaten na Aitsu
Yuusaku is dying for a trip and his dad fulfilled his wishes and he soon learns that his holiday maybe more than he bargained for (continuatio... More...
Volume 1:
1-3) P.B.B. (act 1-4)
Junsuke is the number one companion in a host club where Shinobu used to work. They have been in a relationship for a year, but as they start to get serious, Shinobu questions his commitment. The story continues from where act 1 (chapter 4 of Gaten na Aitsu) left off. (features Maki Motoharu from Punch Up)

5) Gaten na Aitsu
Yuusaku is dying for a trip and his dad fulfilled his wishes and he soon learns that his holiday maybe more than he bargained for (continuation after chapter 3 of Gaten na Aitsu). Note: Yuusaku and Taizou are adoptive siblings, but it's not mentioned in the story.

4) One Day of a Certain Host
Junsuke spends his day while his lover is at work.

4) Yukata Hajimemashita
Club Dandy's special summer event. All the hosts dress up in charming yukata. Includes a series of four panel extras at the end.

Volume 4:
1-5) P.B.B. (act 11-15)
Yoshinari has a brother who happens to be a host. Longing. Disappointed. Rebelling. 18 years old, and he holds all those emotions.He also meets mysterious Arata who seems to have some hidden agenda?

4) Pregnat P.B.B
Motoharu from Punch up appears in Club Dandy

Volume 5:
1-5) P.B.B. (act 16-20)
It's a big surprise that even Yoshinari becomes a host a t "Club Dandy". One day, Yoshinari happened to see Junsuke kissing Shinobu and he realised that the reason for his brother's decision to continue his job as a host was Shinobu....

Volume 6:
1-6) P.B.B. (act 21-26)
“If I told you that I was thinking of going back home to take over my family’s inn, how would you respond?” Those words have finally been spoken by the indomitable No. 1 Host, Junsuke. If he quits, will that be end of his and Shinobu’s relationship? Shinobu also comes to learn about the serious incident that occurred with Arata’s older sister, one of Junsuke’s customers, which brings their relationship to a critical point! The popular host series finally draws to a close! Less... 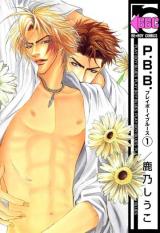 Note: You must be logged in to update information on this page.
Forum Posts Click to view the forum
Looking for Act 4 (Gaten na Aitsu)
over 12 years ago

Sexy, manly and sexy...but with a surprisingly great plot!
by Jessica_desu29
May 13th, 2021, 9:15pm
Rating: 9.0  / 10.0
I love Kano Shiuko's character designs. So masculine, I can't get enough! I love masculine ukes! Anyway, this is actually a really good story if you can get through the absolutely horrendous translations of volumes 1 to 4, especially the latter half of 2, and 3-4 (yuck). I loathe grammar usage errors, but thankfully the culmination of the story in volumes 5 and 6 were nicely translated. So there's a cookie at the end of the winding trail.

The relationship between Junsuke and Shinobu is fun to watch develop because they are so into each other, and I find the whole host club industry very curious. Junsuke is a sexual beast and eats the sweet-natured and equally yummy Shinobu up at every available moment, which is a treat -- Kano is so very skilled at drawing the most lascivious angles of sex! The introduction of Junsuke's brother was a bit of a strange detour but not bad, and I enjoyed seeing women getting intimate with these hot guys as well, despite their ill intentions. A bit of a soap opera, but still highly enjoyable.
Was this comment useful?  Yes

Whew
by OmNom
October 20th, 2018, 7:10pm
Rating: N/A
Well that was a journey; it was fun while it lasted. While the beginning might seem very outdated by now, combined with the sloppy and confusing online fan translation which might deter some readers away, I'm glad I stuck with this series till the end because it still brought me certain enjoyment despite all else. I ike the characters and wouldn't trade anything for getting to know this whole colourful cast. P.B.B. feels to me like the prototype for the mangaka to explore in various ways to polish her skills before she went on to write the spin-off Punch ↑ whose execution and disposition benefitted a lot from that improvement. Its length and age may seem daunting to new readers but those that have spare should definitely pick it up because you'll surely be entertained.
Was this comment useful?  Yes

Favorite
by Yoneko
July 25th, 2015, 4:45am
Rating: 10.0  / 10.0
I've read the first volumes like 20 times. Kano Shiuko is definitely my fave mangaka and this gotta be my favorite manga. I was caught up by both Shinobu and Junsuke, since they might be quite the opposite to each other. Shinobu is the lightest uke I've ever known, he's lovely and so humanly understanding, his character is so special. And Junsuke is the most intense seme I've ever known of, he made me fall in love with him too. Their relationship is so strong and intense, I love it.

Smex + Romance
by tmthuy
February 20th, 2013, 9:37am
Rating: 7.8  / 10.0
The first volume is very enjoyable. However, things start to become a little bit repetitive from the 2nd volume onward. This is partly because each chapter features 1-2 sex scenes, and most sex scenes are not much different from one another. The plot is enjoyable, but not really groundbreaking. In overall, the manga is a good read, packed with lots of romances and smex. However, if you dislike the usual formulaic BL plot, please look somewhere else.
As for me, the translation for volume 3 was not very professionally done so I decided to drop the series in the middle of the 3rd volume.

Good but...
by momomilk
January 31st, 2013, 3:41pm
Rating: N/A
I like it, but I got really annoyed when I got to chapter 11 when Junsuke's brother came into the picture. Like, he is such an idiot and I really cannot handle the amount of female sluts in volume 4. It's so annoying GAHH; I liked the whole story up UNTIL that point. So it only gets a 7 from me.
Was this comment useful?  Yes

Good!
by Namiya
September 17th, 2012, 1:47pm
Rating: 9.0  / 10.0
I like this manga a lot, even more than her usual works which have a rather awkward sense of humor.
This is a bit more serious, showing the difficulties of the two main characters living together, being together and the way their relationship develops.
I love how they both struggle with it all, afraid of commitment or seeking it, while maintaining the host job, the question whether or not to sleep with customers, jealousy, ... it's an entertaining mix of topics that come up and it's interesting to see them both deal with it.

I gotta say the scanlation sometimes is really annoying.
Have you noticed that the same guy is being called different names all the time in volume 2?
Once it's Yuusuke, then Kousuke, and they can't decide between Junsuke and Jyunsuke (Junsuke is the correct way).

Even if you aren't a fan of this type of plot, or if you don't like the characters, if you are looking for some really good smut then do read this!
I believed Watanabe Asia and Ougi Yuzuha to be my personal queens of sex but damn! Kano Shiuko-sensei is sooooo damn good at drawing sex scenes, she draws the men so well, all proportions are correct... I think she deserves that title as well!
Was this comment useful?  Yes

Depth. She's known for her smut but I feel Kano Shiuko's characters have definitely matured and become a lot more memorable with PBB and Punch Up (another one of her recent awesome works). If you want to read a yaoi manga with depth and emotion to it, I recommend PBB. the beginning is reminiscent of her earlier works but as the story progresses, it's good stuff, I assure you

0_*
by mica363
August 16th, 2009, 10:47pm
Rating: 9.0  / 10.0
I have to say that most of Kano sensei's work is pretty hot and definitely worth reading. But I think I really enjoy this series because of the slow growth of Junsuke and Shinobu's intimate relationship. We get to see them evolve into a more accepting couple on several levels and seeing the nice balance of love/hate/anger/comedy in P.B.B. just makes you want to continue reading it.
Was this comment useful?  Yes

Hmm....
by seraimes
May 17th, 2009, 1:13am
Rating: 4.0  / 10.0
Sadly enough, I didn't enjoy it one bit. All her other works are interesting but this one is not to my liking, unfortunately. So confused as to whether I like the mangaka or not. Some of her works are really good, especially when it's serious. Her comedy mangas like this one requires certain types of humor. Also the characters in this one are so manly looking (very masculine and buff). I couldn't stand the sex scenes at all.
Was this comment useful?  Yes