Login to add items to your list, keep track of your progress, and rate series!
Description
From Nagareboshi Manga:

Orange Planet is about a girl named Rui, a high school student in love. One day, while delivering a love letter, Rui finds herself caught in a fire! Eisuke, the owner of the apartment that caught fire, says that since he saved Rui from the fire, that he should live in her home! This will be a problem for Rui, because her childhood friend, Tarou, lives next door and often comes into Rui's house unexpexctedly. Will Rui be able to put up with Eisuke living in her home without being caught? 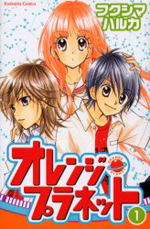 Good and Bad manga at the same time
by tsukimikurashita
July 23rd, 2012, 4:17pm
Rating: 5.0  / 10.0
I liked it at the beginning, it was good but then it went downhill. At first i wanted Rui to end up with the sensei (forgot name) but then after the two years i realized just how much the childhood friend loved her (forgot name too) so i started rooting for them to end up together (another reason i rooted for him after the two years was cause he got hotter

). But after the two years the main herione started to annoy me especially when she started going out with her childhood friend and then when the sensei appeared in her life again she started questioning her feelings for the other one.Then she broke up with her childhood friend and ended up with the sensei. I didnt like the ending, i thought it was stupid. I mean the childhood friend was in love with her ever since they were little (right?) so I was hoping they end up together, but guess not);So it was a good and bad manga.Little disappointed on the ending and who she ended up with, also annoyed at the main girl character after the 2 years (she really annoyed me, seriously) but it was probably because of the plot she had to act that way.

This was stuppid T.T
by animelover1477
June 22nd, 2012, 12:17pm
Rating: N/A
Spoiler (mouse over to view)
: OKay i am so pissed because the maain girl is not even honest about her fellings, this is the typically annoying heroine that has a childhood friend that help her and sshe cant remeber who it is but its obvious to us... it was tachinba ...duuhhh but of course she didnt noe it and then he re-appears and she doesnt believe that she likes him, he goes away and shes said while on the side of this her clidhood friend who loves her secretly . but the heroine is oblivious to that fact until he confesses and shes feels guity and is like ooo tachibana is not coming back.. T.T he does love me T.T boohhoooo so ill fall in love with her childhood friend WRROOONNNNGGG dont do that, its only gonna hurt your friend but of course she is so dumb she doesnt understand .. but in the end she finds out yaayyya woopppyy dingle doo!!

well I do admit i like the art in this its sorta similar to stardust winks characters. but this art is like a 7/10 and i thought let me just read it and see how it goes... she did annoy me in the ebginning but i thought maybe something gud is going to happen since it felt similar to dengeki daisy but of cource daisy iss WWAYYYYY BEETTER so i read about 11 chapters and by that time she goes to her childhod friend is like lets go out . one that line was said im like f**k this i skipped to the end and find out she finds about the truthh ..........................

either way annoying manga to read
Was this comment useful?  Yes

Spoiler (mouse over to view)
Ok, kinda obvious but the stupid girl ended up with the teacher guy - duh! But its SO frustrating cause till the very end I DiDN'T EvEN FEEL LIKE HE LIKES HER!
1) When the teacher and fiancee was going to get married (the fiancee wanted to move the wedding ahead a year) he said YES! I mean 2 pages before he was kissing the main girl BUT NOW HE SAYS YES?!??! WTHECK???

2) AND THE MOST ANNOYING PART - ok it might be because I didn't read the story careful enough but it seemed as if he ONLY got back with the main girl BECAUSE THE OTHER ONE DUMPED HIM O_O Ok so what happened was the main girl told teacher she liked him on the wedding day, and the wedding was cancelled because it was the fiancee that was the one to let him go. Like seriously, he didn't even have the courage to break off the wedding on his own >.> Ugh I bet they are going to get a divorce in 20yrs time lol.

The manga was really good in the beginning but just went downhill
Spoiler (mouse over to view)
At 1st I wanted her to end with Teacher cause he was SO hot, but after a few years the black haired guy was hot as well, and he actually LIKED her as well!

4/10 because I don't feel real love between her and teacher, for not ending up with who I wanted her to end up with cause he became hotter lol. But almost pass because beginning was good when she showed some backbone lol.
Was this comment useful?  Yes

Changing opinions
by kichiX
April 29th, 2010, 12:26pm
Rating: 2.0  / 10.0
When I first read this I couldn't put it down, I remembered romance, love triangles and a wonderful manga. Re-reading I realise that there is virtually no romance between the main characters (in the first section) and it all seems horribly contrived.
If you're under 13 I would recomend this, but for the older reader, I would say that this is not a good shoujo.

In a nutshell: She's so annoyingly selfish ! I feel awfully sad for Tarou.

Also, the story was overly stretched. Too many side characters that were untouched, a plot that was more or less figured out by everyone before 10 chapters yet continued to be dragged on. Not really worth the read.

..........i really love tarou..! he has an awful fate for a guy who's so kind, caring, considerate, sweet and everything! he deserve better! such character does not deserve an ending like that!..
Was this comment useful?  Yes

This Manga Rocks!!!!:D
by mustlovemanga
February 21st, 2009, 7:53am
Rating: 8.0  / 10.0
Spoiler (highlight to view)
This is a great manga,but I wish she whent out with Tarou for longer and I hate how she picks Eisuki. Something about him makes me hate him, but every thing ells is great includeing the art.
Was this comment useful?  Yes

Ehh.
by xdeLiiRiOus
January 5th, 2009, 1:56pm
Rating: 5.0  / 10.0
I don't like this at all. It could've been better. I don't like Eisuke either, and Rui is extremely annoying. I feel for Tarou and I think he deserved better. I think Rui is also inconsiderate of Tarou's feelings. I found this manga to be kind of predictable. I really do like the mangaka's work, just not Orange Planet. The art was cute, but I hated the story.

I really got hooked onto it, but after awhile it seemed to drag on me. Orange Planet isn't as good as her other works. I absolutely LOVE shoujo, but I just don't like this one.