Suzuhara Mugi is a fifteen-year-old on a mission. She is determined to somehow get onto the campus of Shoukei High School, one of those super super elite high schools. This school is huge and private and has tight security. Mugi is searching for her missing sister--her only remaining family--and she has been led to believe that someone or something on the campus of that school will help her in her search.

Unfortunately, that strict school security is preventing her from getting onto the school grounds. However, her luck changes when she literally runs into Midou-kun, th... More...
From Aerandria Scans:

Suzuhara Mugi is a fifteen-year-old on a mission. She is determined to somehow get onto the campus of Shoukei High School, one of those super super elite high schools. This school is huge and private and has tight security. Mugi is searching for her missing sister--her only remaining family--and she has been led to believe that someone or something on the campus of that school will help her in her search.

Unfortunately, that strict school security is preventing her from getting onto the school grounds. However, her luck changes when she literally runs into Midou-kun, the son of an insanely rich mega-corporation president, and elite person at the school.

Midou is not impressed with Mugi’s sob story about needing to get into the school. He is a very smug and arrogant rich guy. But he can be reasonable, and he eventually strikes up a deal with Mugi--he will get her onto the school grounds in exchange for some labor on her part. She must come to his house and work as a maid! Yeah, this is one of those servant girl stories, but there are a few interesting twists, namely the unexpected way Midou gets Mugi into the school. 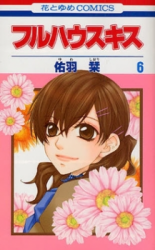 Liked it!
by PinkShippuden
December 28th, 2012, 8:14am
Rating: N/A
Its funny, has great comedy which leaves me laughing out loud! And the romance is kinda cute too, so is the friendship ^.^ In my opinion, i dont think its rushed. Im usually not very interested in Harems (Reverse or not) but i enjoyed this one very much =)
Was this comment useful?  Yes

Really good!
by xbelle4everx
January 19th, 2012, 9:47pm
Rating: 10.0  / 10.0
It's really nice!
One of my favourites for sure!
Some people say it's boring but you really have to stick out until the very end to enjoy the whole thing.
I recommend you read this, especially when you're into Romance and Reverse Harem.

Mysery? I think not.
by kichiX
January 7th, 2012, 8:21am
Rating: 4.0  / 10.0
I started to read this, but for some reason stopped. It was good enough for me to remember it and pick it back up when I had the opportunity, but, as with many things, the second read through highlighted many of the problems with this series.
For a start it is totally unrealistic that Mugi should have to substitute for the art teacher to get into the school. I'm sure Midou had more than enough money and power to get her into the school no-questions-asked.
The idea of the missing sister and the mystery it entailed was a nice one, but the author spent too much time on typical shoujo problems. Her sister seemed to be just a plot device to get the protagonist into the situation in the first place and after that didn't fullfil much of a role. It would've been nice to see more mystery in this.
The protagonist, while being a "strong" girl at least doesn't hit the guys every time something goes wrong which is a strong point for this. The guys, typically, all fell for the heroine, although they did at least have different personalities.
The mystery was solved right at the end and was rushed. To say that it was "rushed" in the usual sense doesn't apply though; the author undoubtedly would've just kept throwing out cliched shoujo situations instead of spending more time on the mystery.
I gave this series a low score because it sold itself as a mystery shoujo, not just a common shoujo, but forgot about that less than half-way through. Points for the artwork which I found nice, but other than that this is a typical shoujo story that tries to over-step its boundaries but gives up half-way.
Was this comment useful?  Yes

Had High Expectations...
by Chibiheaven
November 17th, 2011, 9:28am
Rating: N/A
When I first read the description. I thought it'd be an interesting story with a dark plot to it... In the end, it got butchered and the story is just a whole bunch of unbelievable nonsense. It was quite disappointing. I had expected more drama build up because of the disappearance of her sister as well as the death of her parents (which I believe was not a suicide, but an intentional murder.)
Was this comment useful?  Yes

It's ok. Read worse.
by ZL11
November 16th, 2011, 11:51pm
Rating: 5.0  / 10.0
It's reverse harem, and it's based on a game, but it's okay. It's not the most exciting read ever, but the boys are pretty typical, aside from Kazuya's seriously dark side. There's something nice about things going exactly the way you think they should... and there's something annoying in that there were very few surprises. Overall, it was fine. Lots of bishonen fighting over a plucky girl, a mystery that's not that mysterious once you hit the middle, and a feeling that things are being resolved too quickly, but somehow not caring since it feels like the mystery was more premise than plot. Very middle of the road. Read much better; read MUCH worse.
Was this comment useful?  Yes

annoyed!
by koolgurl5
October 31st, 2011, 10:55am
Rating: 4.0  / 10.0
Well in the beginning the manga has a promising start. Well things get out of hand when the love conflicts form and the mangaka seems to be dragging this manga. The plot stays in one place because the characters knew who was involved but they look for evidence and they realize who is involved..which is the same group of people. The plot is revolving around the same thing over and over again. Also the female character is very weak who needs constant protection from one of the four boys and it get annoying.
Was this comment useful?  Yes

It's ok...I've read worse
by catandmouse
October 30th, 2011, 6:11pm
Rating: N/A
I enjoyed what I read ( I stopped reading a while back because the releases were few an far between that I forgot where I was at)
Yeah it's unbelievable that she can be passed off as a teacher at 15, or that she can ever be a teacher with her intelligence, but it's a fiction, so just take it at face value.

The only thing that started to disappoint me was the obvious love interest. I would have liked for her to pick the guy w/ the motorcycle (It's been so long I can't remember his name). I guess if I ever want to see that happen I'd have to play the game

Nice :D
by colline
August 13th, 2011, 2:55am
Rating: N/A
At the beginning I found it boring but it's more and more interesting and caracters are good.
I think, it's a manga that you can enjoy the reading more than the story. If it's published in my country, I will buy it for sure.
Was this comment useful?  Yes

to XSHADOW
by Kimi_sama
March 30th, 2011, 2:14pm
Rating: N/A
dear my fellow homo-sapien, wat u wrote wz vry vry true an i understand exactly wat u r saying BUT u fail to realize that this is a MANGA and not some lifetime drama episode if u are looking for something realistic go an and find them under the realistic category which cud b found write here on mangaupdates anyway i personal thought that u were to serious on commentin on the manga cuz its to unrealistic ...........i cud understand yuh said d heroine was annoyin or someting yuh so oh gosh come on man
Was this comment useful?  Yes

Boring, no development, no plot
by recca_cool
June 12th, 2010, 11:12pm
Rating: 4.0  / 10.0
Even for a harem series, you'd expect any romantic development of any sort, like your usual shoujo; but there isn't for 10 chapters... totally worthless.
The art isn't anything special; the main character is overused with nothing unique.
Was this comment useful?  Yes