Login to add items to your list, keep track of your progress, and rate series!
Description
Most girls are crazy about jewelry, but not Anis Yamamoto. Not since her father gave her a rose choker as a child, claiming it was a protective amulet which would safeguard her from harm; however, if she ever took it off (a feat easier said than done!), she would be afflicted by a “punishment” of some sort. Not like it matters to her though, since the attention it attracts around school from faculty and students alike isn’t something she’s particularly fond of.

But after a certain incident causes the choker to disappear, she realizes that this punishment her father spoke of might hav... More...
Most girls are crazy about jewelry, but not Anis Yamamoto. Not since her father gave her a rose choker as a child, claiming it was a protective amulet which would safeguard her from harm; however, if she ever took it off (a feat easier said than done!), she would be afflicted by a “punishment” of some sort. Not like it matters to her though, since the attention it attracts around school from faculty and students alike isn’t something she’s particularly fond of.

But after a certain incident causes the choker to disappear, she realizes that this punishment her father spoke of might have been a bit more than she bargained for! Less... 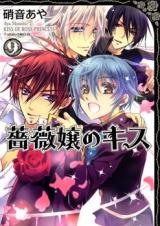 Note: You must be logged in to update information on this page.
Forum Posts Click to view the forum
Anime?!
over 10 years ago
does anyone else think that this is getting TOO SERIOUS?
over 11 years ago

i liked it very much
by YanaseRyoko
January 16th, 2017, 6:20pm
Rating: 10.0  / 10.0
At first I was worried about the main character (anis) because there's always a crybay as the heroin someone pathetic and useless UGH .this is reverse harem u know u get the idea. But this manga didn't disappointed me at all.. Well actually did a little.. Well my heart it's broken. But anyway..

Okay the art was beautiful, the plot was kinda very cliche actually but I like anis personalit , she's not a crybaby and doesn't lose herself for a guy, she have a strong mind and support her people, I love her. The guys are actually super handsome but mutsuki is the one ugh I love him badly I ship those two so hard. He's the right guy for her.
Was this comment useful?  Yes

Doomed from the start
by MaZzAx
March 21st, 2016, 12:37pm
Rating: 5.0  / 10.0
There's nothing worse than knowing EXACTLY who the main character is going to end up with right from the start and realising that you find most of the other male characters more appealing.

The thing about this manga is that the art is beautiful, the story is gripping and it really carries you along. But then it disappoints BIG TIME by being completely cliche in every single way. I never second guessed myself about who the main character would choose and I found it hard to read on because I felt there was more chemistry with one of the other male leads.
Just for once I'd like a manga artist to surprise me and pair up the main character with the dark horse rather than 'option number one.'

And seriously, what was with picking the most obvious of the guys to be the baddie towards the end? Um, where's your imagination.

Had to drop this one. Slain by disappointment.
Was this comment useful?  Yes

But it's just so well executed that it's very easy to suspend your disbelief and enjoy all the fun, gorgeous and unpredictable adventures they have together. (Character and costume designs get an A. The toning and panel layouts are topnotch, too.) A strong plot was never what this series was going for, and the author is pretty upfront about that in her commentaries. I'd say give the first few volumes a shot and if the lack of resolutions annoys you, drop it, but if it doesn't bother you, then read on, friend!
Was this comment useful?  Yes

Meh.
by Pari
June 9th, 2014, 5:12pm
Rating: N/A
I kind of get the feeling that this is typical for the mangaka. The art is nice, and it mostly feels like the plot revolves around getting into situations that are nice to look at. The romance was obvious from the get-go, which obviously resulted in most people rooting for everyone but the guy she ended up with. (And although I'm always for the heroine chosing whomever she wants, I can't help but wonder if she had any romantic agency or if she ended up with Kaede merely because Shouoto wanted her to.)

On a personal level, this was not a satisfactory read. The relationships between the characters often enough seemed shallow and half-assed. The ones that didn't where mostly left in the shadows, so I'm left to assume the reason why they didn't seem shallow was because they didn't get enough time to proof themselves to be. I don't read for the lipservice of friendship, if you know what I mean.

I didn't expect anything more from this story, but I expected there to be at least a few scenes to look back to and say "They were definitely worth my afternoon". Instead, I wish another author would try her or his luck and work with this concept, as it does provice enough genre tropes to be entertaining, yet enough freedom to be exciting and surprising.

Alas, if only the execution had been better. Overall okay-ish if you're sick and just need to read something to fill your time, but other than that, I wouldn't recommend it.
Was this comment useful?  Yes

Barajou no Kiss
by jhane_kotono
May 19th, 2014, 6:32am
Rating: N/A
kaede? really? no way! i'd like it to be mutsuki though.
the first time i read it the first character im attracted to
is him then how come its not him...

T-T how sad i want it to be him really that sucks. your
breaking my desire to continue reading it.

Predictable
by noobzilla
March 6th, 2014, 8:44am
Rating: N/A
I would read this ONLY for the eyecandy. The plot is generic but not cringeworthy at least, that is about as much compliment as I can give it.

Art and Story
by Haibara
November 23rd, 2012, 6:29am
Rating: 10.0  / 10.0
I currently addicted to it ♥ It's kind of boring at the beginning but as the story goes, it's really getting good that I sometimes can't wait to read the next chapter

As for the Art, totally love it, especially love the Bishies Rose Knights even the "fake" ones and Anis is so adorable x)
The Story have slight similarities with Shin Shirayukihime Densetsu Pretear the group of handsome knights-like part of it, for the characters personality which kinda the same with Ouran Koukou Host Bu which makes you laugh and makes you aww... at the same time xD Which I triple like it

The Author SHOUOTO Aya, I have first read her S.L.H which leads me here after reading that awesome manga

that I started to like her works and became another fan of hers XDD I think that ends my comment... Sadly, it's gonna end soon but then again I enjoyed reading it that I give it a 9/10 since it's not end yet, hopefully it has a good ending though

LOVE IT!!
by FMACodeBleachMan
June 18th, 2012, 5:47pm
Rating: 10.0  / 10.0
I absolutely fell in love this story the minute I started reading it. It's something I haven't seen before with four Rose Knights, that are all really good looking, and some "fake" Rose Knights created by… Anis's own father! There is a bit of romance and rivalry going on between the original four Rose Knights which makes the story better. At this point, I don't know who Anis may choose, Kaede (hopefully) or Mutsuki. Whatever happens, I be happy with for the drawing makes the characters better, especially when Anis kisses a card and the Rose knight appears with rose petals twirling about. Also, the relationship between the characters is good, I'm just glad Mutsuki finally grew to like Anis, which increases the love rivalry with Kaede. But, to the disappointment of Mutsuki, I do believe Anis will choose Kaede, especially with him being the only one having a 2nd Awakening and kissing Anis twice! What will happen next....?!
Was this comment useful?  Yes

oh so good, so good!
by countingwounds
June 10th, 2012, 6:04pm
Rating: 8.8  / 10.0
i like it a lot! at first, i wasn't all too impressed, but things got rolling, and it got more sincerity in the mix, and i ended up liking it a whole lot. it gets a lot better!! a wholeee lot better! i love that anis isn't necessarily a physically strong, save-the-day kinda heroine, but she tries to do what's right, and she does it even though she finds it hard. she doesn't like being able to do nothing, so she does what she can.

and the knights... oh the knights... ahhhh! they're so beautiful, and their personalities are just so vibrant and adorable. even the ones i didn't like in the beginning began to have more complex personalities, and a past, and motives, and began to become more real. i like it.

the art - whoa, the art is breath taking. every time a full color drawing of the knights come up i'm like AHHHH! (in a good way.) anis even got a bit better drawn i think.

and i love the romance! it's so... i mean...
Spoiler (mouse over to view)
kinda predictable? but they throw in wrenches.. like the black rose, i was not expecting that, even though it was somewhat of an act (phew by the way! i was like NOOO!). i think she's ending up with kaede - that's how i can see it ending up, anyways - but it gives the others their moments.
it's just steamy enough to wish it was even more steamy.. hehe...

all in all, not the BEST IVE EVER READ OMG. but it entertains, and keeps you wondering, and oh goodness the bishies. i can't believe there's only a couple more volumes, it can't end ;~;
Was this comment useful?  Yes