Login to add items to your list, keep track of your progress, and rate series!
Description
From Fantasyshrine:

1-2. Kiss of Blood
Riku delivers flowers to a western mansion for his part-time job and encounters three exceptionally beautiful men. Since then, he has been plagued with terrifying yet sensual wet dreams every night! Who was fondling him!? Riku couldn’t help feeling violated, bewildered, and angry all at the same time… Keito, one of the three occupants of the western mansion, is the culprit of Riku’s downfall. He’s on the hunt for Riku to fulfill a destiny intertwined with love and betrayal, thus a vampire legend unfolds.

1-2. Kiss of Blood
Riku delivers flowers to a western mansion for his part-time job and encounters three exceptionally beautiful men. Since then, he has been plagued with terrifying yet sensual wet dreams every night! Who was fondling him!? Riku couldn’t help feeling violated, bewildered, and angry all at the same time… Keito, one of the three occupants of the western mansion, is the culprit of Riku’s downfall. He’s on the hunt for Riku to fulfill a destiny intertwined with love and betrayal, thus a vampire legend unfolds.

3. The Rose Gardener
Riku decides to grow his own roses.

4. Bully Seme
Saisei, one of the vampires living with Keito, finds a human who does not respond to his "voice". The vampire soon becomes obsessed with violating the man at his workplace... but the addiction becomes poison to Saisei.

5. Scent of Lilies
A short story about the third vampire, Natsuhi, who meets a sickly boy. Less... 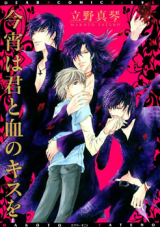 Nothing to see here.
by AsexualFujyoshi
April 12th, 2013, 5:29pm
Rating: 2.0  / 10.0
A couple of stories about a couple of guys who get raped and molested by vampires and then inexplicably fall in love with them afterwards for reasons that probably didn't even make sense to the author, but since she couldn't find another way to shoehorn in a crappy love story, she went with them anyway. There are a few okay sex scenes. Art's alright. That's about it.
Was this comment useful?  Yes

It felt like it tried to condense a lot of story into a very small space, but didn't work out so well. Lot's of rape, stockholm sydnrome-esque romance, but just no real energy behind it at all.

You might like this if you like her art or her storytelling, or just have a huge thing for vampires. Otherwise, I'd suggest other stories. A couple of the ensuing one-shots are a lot better than the initial title chapters, though--"The Scent of Lilies" was actually short, sweet, and kind of touching.

The longest one, focusing on the romance between one of the other two vampires and a human, is even worse on terms of cliched rape-is-love non-con, though.

Nonconsensual
by Embracing Madness
March 12th, 2012, 11:09am
Rating: N/A
The trope of all-powerful beautiful vampires seducing the hapless humans is an overused trope, but still one which attracts me a lot. The nice clean artwork in this manga somewhat feminizes guys, but I'm still ok with that too. There wasn't much plot, but I don't mind reading fluff, so long as it something happens, some sort of resolution is made, and the whole thing is coherent and understandable throughout. It was also nice to see intriguing themes like reincarnation pop out, though they were only mentioned as a plot device to the making up and the sex. What I couldn't like, however, was the non-consensual element in it being treated so cavalierly. The humans were saying no, the vampires went right ahead and raped them anyway, but in the end the humans went "Oh, I was wrong to fight you all this while, I understand your angst and disregard for what I want, because you know best and you knew I was panting for you all this while, so from now on I'll do what you want instead X0X0" Which is. Really. Really. Irritating. I get that some people may like this non-consensual element, and even though I didn't like it, it wasn't so bad that I couldn't continue reading the story, but still, it was a lost chance for a properly deep character development. The aggressors are vampires, they're inhuman by nature and they don't have to be nice, but for the humans victims to be that idiotic and forgiving is incredibly horrid.
Was this comment useful?  Yes

another good one from this mangaka
by blackknight
March 10th, 2011, 1:38pm
Rating: 10.0  / 10.0
I do, for the most part, love Makoto Tateno's work. I ones it didn't care for were among her first ones. Since then, she has always managed to come up with stories that entertain me. This is no exception. I do love storys with vampire themes anyway, but the main story here with Keito and Riku was put together well. You get enough information on the characters to care about what happens to them. Unfortunately, with a oneshot, you don't get all the information you would like to get. You have to be able to read "between the lines". A good writer, however, writes in a manner that helps you do this. I think she did this here. I could easily fill in the missing pieces. You didn't get to know the other 2 vampires as well as Keito. There was nothing on their backgrounds. This background knowledge really isn't important to the story with Saisei and Yasuhara. It would be interesting to have it, but it is not needed. I think that is where the disappointment comes in for some. They are curious and want it, so they are unhappy that it's not there. It would be nice if she did a sequel with just these two characters. The final story with Natsuhi and Minato is the same. Again, you don't need the background to make the story work, but it would be enjoyable if it were available. It was meant only as a short peek into Natsuhi's existence. I would definitely like to see more of the characters in this manga. I recommend this for reading. And, I have always loved this mangaka's art.
Was this comment useful?  Yes

There should be more!!
by kasumi_yyh07
August 4th, 2008, 9:02pm
Rating: N/A
This really is a different type of plot usually seen in vampire genres. Considering that it's a Tateno Makoto work, it's already expected to be a fascinating read. The only complaint I have is that there should be more!! I'm not content with two chapters alone!!
Was this comment useful?  Yes

The first chapter was full of potential because the plot itself is a little cliche nowadays [in the romance genre, BL or no-BL], but the way the mangaka 'twisted' it was sort-of a breath of fresh air from typical romantic vampire stories. I was really surprised when so much element was presented all at once in the second chapter that I had to re-read the some parts of the first chapter and check-back to chapter 2 just to make sure I'm following the right progress of the story. I would've preferred a more slow-paced development between the characters and the connection with their past lives. There is still the matter of the two remaining vampires and unanswered questions with regards to their origin...no offense, but the story itself turned them into a couple of "extra characters"-- unless there's a continuation to explain their own stories. Hmm~

Overall, the plot could have progressed in a slower pace and some aspects were left hanging, but we'll leave it to the mangaka for continuation [hopefully].
Nonetheless, this is yet another good title from Makoto Tateno.
Was this comment useful?  Yes

Hm.....
by pbonk
July 21st, 2008, 12:43am
Rating: 10.0  / 10.0
I'm very like Makoto Tateno's works and the art absolutely handsome guys. But its too bad the story only end with 2 chapters.. ehe..he..(I want moreee...). I like vampire's story and this was pretty good. Just wondering, why Keito thought that Riku previous reincarnation killed him. But Riku said they didn't. Well maybe i must read it once again to understand...ha..ha...
well indeed too short... ceh..