Login to add items to your list, keep track of your progress, and rate series!
Description
Watanuki Kimihiro is haunted by visions of ghosts and spirits. Seemingly by chance, he encounters a mysterious witch named Yûko, who claims she can help. In desperation, he accepts, but realizes that he's just been tricked into working for Yûko in order to pay off the cost of her services. Soon he's employed in her little shop- a job which turns out to be nothing like his previous work experience! 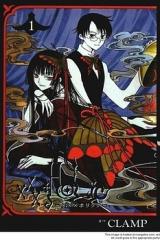 Note: You must be logged in to update information on this page.
Forum Posts Click to view the forum
xxxHOLiC Gets Live-Action Film Next April
about 1 year ago
So the ending...
over 9 years ago
Name of the childhood friend?
over 10 years ago
xxxHolic ONESHOT ft TRC
over 10 years ago
spine designs?
over 11 years ago

this is nostalgic
by Miachann
August 11th, 2020, 2:03am
Rating: 10.0  / 10.0
This manga is so nostalgic, i remember we have this manga and the other Clamp sensei manga like Tsubasa, Cardcaptor Sakura, Tokyo Babylon, X and etc back then. Clamp Sensei is geniuses i love them. and even Since i was kid (before i understand bl things and become Fujo) i always love Doumeki and Watanuki to be together huhu i love them so much..
Was this comment useful?  Yes

CLAMP? You meant the Angst Empire?️?
by Nemurenaiyo
May 15th, 2018, 9:14am
Rating: N/A
I gotta hand it to them. CLAMP is probably one the most extra when it comes to their art. So beautiful. So imaginative and creative. And this goes hand in hand with the plots their works carry. Out of all their works, though, I'd say xxxHolic is probably their work with the second most tangible plot (Card Captor Sakura takes #1 because despite it's huge involvement with the paranormal, it's still mostly based on ordinary life and readers still find the series entertaining without being completely swept up into complex supernatural arcs).

If I'm going to be honest, I think xxxHolic could've been better. I love the chapters with them solving supernatural cases and facing interesting clients. It was all good there till it started becoming too dragging for me and I got bored. Sure, there were loads of questions to be answered and this was probably what made the whole series intriguing all the same that it was dragging so bad. They had things to reveal but they really took their time giving out answers. The only thing the series got it going for me was the hope that the subplot CLAMP put in could've been canon.
Spoiler (mouse over to view)
no Watanuki and Doumeki did not end up together and since then i've been jaded and have thus, lost all hope in CLAMP i mean really CLAMP? I only ever wanted one thing
Was this comment useful?  Yes

It took me years to gather up my courage to read this
by tnwls523
March 18th, 2018, 12:02am
Rating: 9.0  / 10.0
I knew CLAMP is famous for building a huge interconnected world so I kept this on my wish list for more than 5 years but I finally gathered up the courage to take the plunge and I wasn't disappointed.

First of all, my god the art is beautiful! Yuuko's kimono, the shop, the artifacts, they are all drawn so majestically. I loved the delicate, intricate, and charismatic artwork in xxxHolic.

The characters were really interesting too. I really liked the mysterious and strong yet sometimes fragile aura that first Yuuko had then Watanuki took on. I was gradually drawn in like a firefly to a candle. I absolutely adore Doumeki and his caring for Watanuki. I liked that shounen ai-ish mood in the air~ although if you're not a fan, you might be feel put off by it.

The plot is at first, a series of mysteries with the customers coming to make wishes and Watanuki being sent to solve them. However, the real plot is gradually revealed and oh my, is it good. If you read this before TC as I did, you will definitely be confused and not understand what the heck is going on. I definitely recommend reading TC first to avoid that. I read TC right away after reading xxxHolic because I was so confused by the end. I think Clamp's style is more about showing events that occur without really explaining them so the reader has to figure out what happens. I've come to find myself enjoying this style but I have to say it's definitely frustrating and requires some patience. I liked the overall plot but I liked the day to day events with customers coming to make wishes too. It was fun to see Watanuki constantly tripping and falling as he tried to "solve" each wish. Um, I'd have to say it's sort of like Gintama style where you just have to enjoy the ride as each of the overarching plot's detail is revealed one by one.

Tl;dr - It's definitely worth the read. Art, story is excellent but read Tsubasa Reservoir Chronicle first.

This series is one of the latest one ="=
Oh how I hate CLAMP's obsession with "Sakura" and "Shaoran"
Everything goes around them...
Was this comment useful?  Yes

Left With So Many Questions
by Anonymous
October 26th, 2014, 2:38am
Rating: 7.0  / 10.0
If you want to know what is on the other side of the "witches" life.. You must read this.
Spoiler (mouse over to view)
already I know her from tsubasa.. But I find the stories to get very repetitive even though they are different. I always love how dark it can Get. Very intelligent. I'm still confused on his tie to everything though.
Was this comment useful?  Yes

Trying to figure out the loose ends still
by tipz
July 6th, 2014, 3:21am
Rating: 7.0  / 10.0
If you want to know what is on the other side of the "witches" life.. You must read this.
Spoiler (mouse over to view)
already I know her from tsubasa.. But I find the stories to get very repetitive even though they are different. I always love how dark it can Get. Very intelligent. I'm still confused on his tie to everything though
Was this comment useful?  Yes

All the connections....
by moonmystery
June 29th, 2014, 10:01pm
Rating: 10.0  / 10.0
This work has so many references and connections to CLAMP's other works such as Card Captor Sakura, Tsubasa Resevoir Chronicles, and etc. (and i love them!!) The characters were portrayed beautifully, and by the end I had fallen for Doumeki 10 times over...

One suggestion though: DO NOT READ THIS UNTIL YOU'VE ALREADY READ TSUBASA RESEVOIR CHRONICLES!!!! These two have an intertwined plot, so you must read the former to understand the latter!!

And the ending made me cry until my tears just dried up (ended up with puffy eyes). I feel really sad for Watanuki, but I have hope that some time in the future, he will come to term with his situation. So, I will be the same, and just place faith in my own little made up ending.

(for this reason, I cannot bear to read the sequel. I've already imagined my own happy ending for watanuki)

the sequel
by nya-nya
May 21st, 2014, 9:22pm
Rating: N/A
i really love this manga, more than any other clamp's work. actually, i was a bit disappointed about the ending, it's just so sad to see the main character, watanuki, waiting for yuuko until unlimited time.
But, the sequel is pretty good. at first, i was just confused, why this manga (xxxholic rei) became a sequel when there is no connection between the ending of xxxholic and the story goes? and then i realized that the sequel is really "the sequel"

Now i have to wait every week, or every two weeks to read the continuation of xxxholic rei. i hope this sequel has a better ending ( even if i'm pessimistic about this).
Was this comment useful?  Yes

Awesome
by sejal
April 6th, 2014, 4:39am
Rating: 10.0  / 10.0
This is the first manga I ever read. Originally, I started watching the anime (this is also the first anime i ever watched) and the I got introduced to the world of Japan, Korea, and China. Of course I have read/watched many mangas/animes now. The story is excellent and since I am a supernatural lover, its perfect for me. It has a lot of philosophy which makes me love it more. The ending is sad. He waits for her even if he knows she wont come, because he can't let her go. But I think its necessary to have that hope. So the readers can imagine whatever they want. And hope is all we have afterall. And i think clamp is famous for those kind of endings, considering this and Tsubasa.
Watanuki, as he grew older, he became so hot. I have fallen for him for years now. Okay, so this is a manga I'll love forever. Its beautiful and the ending didnt disappoint as much as Tsubasa did.
Was this comment useful?  Yes

Spoiler (mouse over to view)
By the last chapter, Watanuki had been in possession of the shop for four generations, which is why he tells the Doumeki look-alike (his first name is not revealed) that he looks so much like his great-grandfather (Doumeki Shizuka, whom Watanuki spent most of his time with throughout most of the series), who also greatly resembled his grandfather (Doumeki Haruka). The current Doumeki at the end (first name unknown) is in possession of the egg, which is implied to have been passed down within the family, because Doumeki Shizuka's decision was to have the Doumeki family use the egg to make Watanuki forget about Yuuko when Watanuki wants to and is ready to forget about her.

It was confusing the way they made Doumeki Shizuka's descendant look so much like him at the end, but that's more or less how it ended. I do agree that the ending was disappointing, as it seems as though Watanuki will never meet Yuuko again and will continue to wait for her alone, regardless of how much longer he will have to wait,
but overall, the characters were extremely lovable and this series will always be one of my favorites, even though I've probably shed more tears than I should have over a single series that isn't even officially categorized a tragedy.

It's true that in the beginning, the story seems to have no plot and is filled with lighthearted comedy as the characters interact with each other, but towards the middle and end, it is clear that the story is going in a particular direction and a stable plot begins to build on that. Of course, the artist is CLAMP, so there's pretty much no such thing as proper anatomy, but I've grown up reading CLAMP's works, so I have no issue with it.

I do not recommend this series to those who dislike stories that do not begin with a particularly serious plot or those who are strongly against possible romantic feelings between two males (it is never officially stated, but there is a lot of implied romantic notions between Watanuki and Doumeki, and CLAMP has completed a few shounen-ai series, so that's not entirely impossible). I do highly recommend this to anyone else who likes supernatural stories that evoke various different emotions and can grow to just adore the characters.

On another note, xxxHolic Rei was disappointing in the sense that it ended up being an alternate story (as it is labeled) instead of a continuation/sequel to xxxHolic. I would have loved to see a happy ending for Watanuki.