Login to add items to your list, keep track of your progress, and rate series!
Description
Sylphid is a horse born on a small horse ranch. Even though he is named after the fairie wind he must overcome the handicap of having been born with tendonitis of the leg, and the loss of his mother during his birth. Hayao; the young boy who loves horses, is determined to see Sylphid grow up healthy and become a top racer like his mother once was. However, the odds are stacked against the orphaned foal and the young boy. 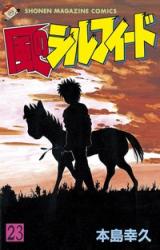 Entertaining, but bad
by Molenir
September 14th, 2010, 3:34am
Rating: 7.0  / 10.0
I enjoyed this story. I really did. There were a lot of fun, dramatic moments. Moments where I cheered for the characters, and the horses. However there were also things in the story, that just made me shake my head at how dumb it was. Parts that just have nothing to do with reality. Such as at the very end when they're looking for a wife for the horse. The fact is, that a stallion, a truly successful racing stallion's sperm is used to create lots of foals. Secretariat for example had several hundred foals. If a horse is prized, they don't bring 1 mare in, they bring lots. It was almost like they were making a Disney version. With the one horse, one wife scenario. That was just one of the many flaws in this story. Another issue is with some of the choices the translators made. Such as Hayao always calling his father Daddy. Most children change how they refer to their parents when they grow up. Daddy, becomes Dad, etc. A final issue I had was with how sappy the story became later on. Marcel was probably my least favorite character in the story. Everytime he showed up, I wanted to just skip ahead to when he was gone.

Despite the many flaws though, I did enjoy the story. I liked the Black Stallion growing up, and somehow I've always been a sucker for stories with horses in them. So while I wish the author had been a little more true to reality, in how racing is done, as well as a better storyteller, I still enjoyed this manga enough to recommend it.
Was this comment useful?  Yes

Simple but enjoyable....
by seralin
January 15th, 2010, 9:23pm
Rating: 8.0  / 10.0
It is a very old series, so it is easy to forgive the problems, be it the simple art, or the increased focus on the horses, which makes the situation like the disney movies, where the animals suddenly become adult-like. Not that extreme, but there are similarities, since you will see a lot of emotions coming from the horses, mostly the intellectual competitive (or fighting) spirit.

When you read it, no doubt you will find lots of similarities to what you have already read. But, because of the rather unique story, you won't get too offended by those, and you will start to get drown into the story more and more, with each chapter. And even the story being from the past will add an interesting flavor to your enjoyment.

I think this manga deserves a rating of 8/10, which for me makes it a worthy read.
Was this comment useful?  Yes