Login to add items to your list, keep track of your progress, and rate series!
Description
When he was young, Kouichi ("Usa") was taken in by his cousin Kaname's family. Usa extremely hates when others touch his neck... But what might be behind his strange behaviour?

Groups Scanlating
Memory For You 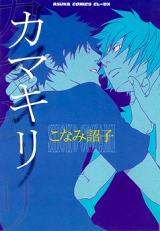 The pyschological part is not explained. Not a lot of dialogue but somehow the characters understood each other, even though it is such a complex topic.

The shounen ai development had no transition, in my opinion. Very sudden.

Although I do like that they ended on a positive note, as opposed to a downward spiral, which was the ambiance of the manga.

That... was stupid
by Alestair
May 6th, 2013, 4:11pm
Rating: 3.0  / 10.0
Seriously, what the hell was that?
Was this a typical shounen-ai or did I get unlucky? Excuse me for being sour and probably the only odd one out, but I fail to see any emotional depth or intricately developed plot in this manga. The story- whatever the story was, didn't get a reaction out of me besides "Wait, what? That's retarded".

And that's what the manga was- nonsensical and stupid. It didn't even try to make sense. Also, the "choking people" part of it was stupid too, nope-- don't give me crap about "symbolism" when there was none. Don't go hunting for non-existent white rabbits. Also, don't read this manga.

The only good thing about it was the first two or three chapters, where a bit of an atmosphere was set up, but then the manga went ahead and did nothing about it. Also it comes complete with corny background and arbitrary dead parents.

too short
by whitespade
August 26th, 2012, 12:35am
Rating: 7.5  / 10.0
i would love to love it, but i can't. the first three chapters are beautiful, but the explanation for the strange behaviour come out of nowhere in the fourth chapter. i mean, sure, they can achieve the 'revelation' after some time but it feel forced. it would be better if usa don't have that kind of view towards his parents, but just apply it to his own relationship. a bit longer, or at least a more optimum use of space can increase the characters depth. the panelling in this manga is too sparse. in a way it make the characters more melancholic and poetic, but if you are contracted for just one volume it is good to cram a bit more in one page, eh? i do love the atmosphere, it's just i want a bit more development. i love the art though.

not a particularly terrible read, but one do desire more.

umm
by pleochroic
March 20th, 2011, 8:12pm
Rating: N/A
if i came at this at a younger age i'd probably find it deep and emotionally affecting, but as it stands it's a bit lacking -- however, i wouldn't call it "crap". i am probably also spoiled for it because i read a lot of psychological seinen manga. as to the plot, i didn't see enough connection between everyone being confused, yet shortly thereafter (was it shortly? days, weeks? no idea really.) usa and kaname had figured it all out -- my favourite part of psychological manga is the process of figuring things out, and that was completely shorted here. with usa i can see how he might have internally arrived at the end point, but kaname? how did he suddenly become so insightful? and what happened to kiyo? how did kaname get from "go ahead, he's yours" to where he ends up? the sparse art fit the story well in general, but it didn't tell me enough.

i am happy it has no hard sex in it; that would water down the impact. i'm not gonna rate it because i don't think i can be fair. it's above average though because it's bound to make a lot of people think, and that's always a good thing.
Was this comment useful?  Yes

Seldom do I see such emotional depth and developed plot
by kurosu_yuuki
June 5th, 2010, 9:18pm
Rating: 9.5  / 10.0
First, I totally disagree with most of the people here.
Although I don't quite get why they keep on with the strangling thing, I think the concept of this manga is really deep and amazing.
To the person strangling, it's like you hold the person you love's life in your hands. And to the person being strangled, it shows how much the person loves you as to let you go free in the last minute. Not to mention it IS indeed all about masochism, for those who didn't get it. I know it was implicit, but it was like Kaname showed Usa that pain is not necessary because he can feel "posessed" with love itself.
At least I think that's what it all meant.

I also thought Usa's past was beaufiful. Too sad, I know, but his father couldn't bear that he had fulfilled the mother's wishes until the point that he lost control.

I'm not denying it DOES have some lose ends...for instance, what happened to Kiyo, after all? And what about the one-shot? (I didn't understand A THING!)

Oh, and one more totally new thing! You know...I usually HATE manga women, but I don't hate Kiyo. She's actually really nice and if it weren't for her, they would have that distance between then forever.

As for the art...really pretty!

My only complaint, therefore, it's the lack of sex. I knoooow it's shonen-ai, but I was so looking forward to see Kaname and Usa get dirty =/
(And I love the nickname "Usa", it's so tender and lovely!)
Was this comment useful?  Yes

Surreal and vague
by AeeDee
January 21st, 2010, 10:46pm
Rating: 6.5  / 10.0
It's a unique story, but it feels overly-simplified and vague. The art style is interesting, but it helps the story to feel very floaty and dream-like; the characters speak in half-thoughts and with incomplete sentiments. Their feelings are never completely clear, and the final justification for Usa's strange behavior seems to come out of left field, as he seems to magically realize everything at once. The story feels contrived in this way; one minute they're confused and the next everything is falling into place, as a few pages somehow jump across an empty, missing span of days. Time vanishes and skips forward, and you get the feeling that only a few days passed - was it a week? was it a month? There's no way to know.

I read this entire thing in roughly 40 minutes, which is surprisingly quick for a 5-chapter story. I wasn't able to really connect with it; too many floating, missing pieces, with a poetic, but under-developed story. Apart from mentioning Usa in this review, I can't name the characters; they speak little of substance despite being with us for several pages, and their personalities are mostly non-existent. They seem to exist only to flesh out a short poetic concept - and that's much better suited for a one-shot than a full volume. The premise was good, but what more is there? This idea has great promise, and ultimately arrives at nowhere but a cliche, generic ending.

Interesting idea, but a forgettable manga.

ok i can understand that for the regular shounen-ai reader this seems breakthrough stuff but for ppl who read psychological seinen manga this is just crap...very simplistic drawings without a hint of some kind of an interesting style, simplistic to childish panels (cut the page in 3 panels and done) and last the plot was laughable,amateurish, poorly conceived and very basic...overall the plot seems like something i would be able to conceive and thats not a good thing
Was this comment useful?  Yes

Out of ordinary
by Zoya-chan
April 23rd, 2009, 9:45am
Rating: 9.0  / 10.0
This manga is very interesting. I expected a run-of-the-mill shounen-ai story full of kisses and huges, but actually, it turned out to be an unusual read. The story itself was really touching thanks to the greatly constructed situation and the depiction of the characters' emotional state.

One of the Most Touching Stories I've Ever Read
by MightyMaeve
November 26th, 2008, 12:44am
Rating: 10.0  / 10.0
This one moved me. The mangaka has utilized white space and art in exactly the right places to give such an emotional, evocative bang! The story is deep, thought-provoking and psychologically demanding.
I loved it.
It is definitely not the typical fare for Yaoiland, but it was a journey left of centre that was beautiful, scary, melancholy and touching but ultimately uplifting.
Note: In Japanese, the praying mantis is called "kamakiri" means "Scythe sword." It does form a symbolism in the story. (Do you give what the person you love wishes if you know it will harm them? Can you stop yourself from harming another when you believe that is 'in your nature?'

Not your average fluffy shounen ai
by candyloop
February 24th, 2007, 1:29am
Rating: 9.6  / 10.0
Interesting read. The story is focused more on "love" concept rather than "shounen ai" concept, altho it is there. The art has its ups and downs, sometimes the panels are a bit too empty, like in a doujinshi.