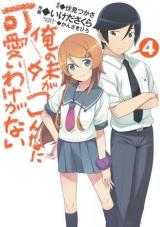 For the father, i swear i was seeing akuma in his character. i mean wow, that guy can turn super saiyan anytime. Also for the part when kirino was going to smash the cigaret tray on her father, was ummmm..... toooo exaggerated. was she try to kill him for just a game. if so, i would be afraid of a sister that can kill u any time, and i know its not that type of manga.

the anime is alot nicer than this, not exagerated like the sister show a "Kawaii!!!!" expression all the time.

still its still a nice manga, if you a pervert like me , Hahahaahahaha. (Just kidding)

Odd designs, but a decent adaption.
by remuji
November 4th, 2010, 5:12am
Rating: N/A
With the anime adaption now underway, and two tankoubon published, the manga for this story has had ample time to prove it's place. The funny thing is that it doesn't sit too well at all.

Firstly, characters.
It's probably difficult to to translate print to panels, and it's good to give the manga little bonuses, or treasures for fans, but Kirino's character doesn't come across properly, in my opinion. She's a rose-red tsundere right from the starting gate. I approve of the "what face was she making out of her brother's view" method now and then that the limitations of the novels cannot convey, but we get these little moments far too often.

She blushes far too often around Kyousuke. I mean, there is no character development there, and fans of the series know that
Spoiler (highlight to view)
their relationship improves after a few light novels, and she lets down her guard, but I assumed she wasn't smitten to begin with, and that her feelings accumulated with time.

Secondly, the art.
It doesn't fit at all, nor is it effective, I dare say. Almost immediately, I could tell that the artist completely botched Kirino's character design. In most cases, for adaptions from light novels, the artist will directly match the character design and basic style of the novel illustrations. Here, the features are there, but she isn't the right shape, her body isn't as slender, and her facial expressions flicker between pink-faced embarrassment and fuming anger. There isn't any depth in these designs, but it's not a deal-breaker, so I'm not really bothered by it when I read this.
Was this comment useful?  Yes

Brother complex
by point64
July 20th, 2010, 1:46pm
Rating: N/A
She has an obvious brother complex and so she hides it by playing eroge and what not. Truly a realistic story. The art is cute too and the main hero, although bland, is not the normal sniveling wimp you would see in most manga. He is actually able to control himself and I haven't seen him blush yet.
Was this comment useful?  Yes

Overwhelming cuteness aside, there's not a whole lot going on in the story. My hope is that it picks up some in the later chapters. I feel really shallow admitting this, but as long as the artwork continues to be so stellar, the plot doesn't really matter so much. Definitely no 10, but for someone as weak to cute as I am, I can't give it any less than a 9, simply for the artwork and the tsundere.

Different from what I imagined.
by HopelessWriter
March 30th, 2010, 3:35am
Rating: 10.0  / 10.0
To my surprise and relief this manga wasn't what I thought it was. It doesn't seem like it'll go into the incest route and has a good characters.

The imouto heroine has an obsession with imouto gal games and not our protagonist. The heroine is popular and had no one to share her hobbies with and by chance her brother found out...

I highly, highly recommend this manga.