Login to add items to your list, keep track of your progress, and rate series!
Description
Princess Nakaba of Senan is forced to marry Prince Caesar of the enemy country Belquat, tantamount to becoming a hostage. While Caesar is pleasing to the eye, he is also selfish and possessive, telling Nakaba outright: "You are my property." With only her attendant Loki at her side, Nakaba must find a way to cope with her hostile surroundings, her fake marriage...and a mysterious power! 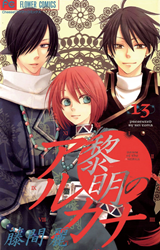 can someone please enlighten me
by milkgreentea
April 19th, 2019, 8:20pm
Rating: 8.1  / 10.0
[spoiler]like for real. I read this years ago and I remember that I found the ending for Loki illogical. [spoiler]Why did Loki end up dying?? There was no reason for him to end that way. There was no reason for him to use his powers anymore so why did he let himself die like that??[\spoiler]

From the first chapter I was already wondering why "a small island split into two countries" has such a drastic difference in climate between the two. Is there a mountain range in the middle of the island? Nope. Is it a big island? Nope. There's no reason why the south part of the island is warm and fertile while the north is cold and barren then.

And Caesar's a total jerk at the beginning. His change in character is unrealistic.

The story's alright (pretty average). It's a happy ending otherwise.

A Beautiful World and A Beautiful Plot
by gloriousmangalover
March 23rd, 2019, 9:55pm
Rating: 9.0  / 10.0
I don't usually hand out 9-10's, so this is going to tell you something:
- Absolutely gorgeous art
- A strong FMC! Yeah, she was oblivious, but I really liked how strong and mature she was. She stuck to her guns, and I appreciate that.
- The two love interests, Loki and Caesar. Caesar was cool and all, but, like everyone else, I was really rooting for Loki.
Spoiler (mouse over to view)
I knew he wouldn't win, but, dang, I didn't know he was going to die. It was incestuous, but I ended up bawling my eyes out anyway.
- WORLD-BUILDING WAS FANTASTIC. I usually don't say this for mangas in general, but I adored the world-building. It was one of the stronger points in the manga.
- The plot development and character development were absolutely astounding. I cannot emphasize how much I enjoyed watching the characters grow along with the a very premise-focused plotline. It was awesome. And the reveal at the end, oh my God. I actually never predicted that. . .
- Romantic development left something to desired.
Spoiler (mouse over to view)
Like, I knew how and why Caesar and Nakaba fell in love, but it just felt weirdly short to me. Loki and Nakaba honestly had way more "romantic" moments.

TL;DR: Awesome world-building, plot/character development, AND A STRONG FEMALE PROTAGONIST. I loved Loki so much, Caesar was alright, but I just felt that some of the romantic development was cut short. Therefore, 9/10.

Left a lot of unexplained stories
by Zina
January 16th, 2018, 4:41pm
Rating: N/A
The manga desperately needed one more volume to give it a conclusion. There is a twist ending, and then they barely follow through with it.
The art is very pretty and it is easy to tell the characters apart. The addition of humans with animal characteristics was fun.
Also, there are a fair number of insinuations of insest in some of the couples. That's just a warning for future readers.
Was this comment useful?  Yes

One aspect ruined it for me...
by SangMo
January 2nd, 2018, 10:13am
Rating: 7.0  / 10.0
Spoiler (mouse over to view)
I get that Nakaba and Loki were close. (You find out they are siblings) I just didn't like the fact towards the end that Nakaba kept making these declarations about the effect Loki would have on her without EVER thinking of what it's doing to Caesar the man she supposedly loves. I honestly felt bad for Caesar having to endure it. He thought that if she were to break, he couldn't fix her unlike Loki. That's just sad in my opinion. That whole situation kinda ruined the story for me.

god damn it! Im still crying
by YanaseRyoko
January 20th, 2017, 9:17pm
Rating: 9.0  / 10.0
.... because im mad.
I really love the story its really sad you are gonna ended up quite depressed, all those characters actually they arent hard to understand why they turned out to be like that.. Cain past got me badly, and loki... i just love him. So why

the art was beautiful, but the heroine as always such a stupid girl

Spoiler (mouse over to view)
Lets talk about loki.why did he always had to suffer the most, why?? ugh im just mad about it, is so fuckin sad and then he has to died. ALONE! why didnt ended up with a happy end. All this time he suffered the most and even nakaba gives a damn about him, he loves, kills for her, he was always by her side, he even had to sleep with that woman for her sake, this is just rubbish!!, the author actually has quite likig for him huh, and at the end of all those bad things.
he was her brother!
Im just dying here. I cant.
i think he used to much his power trying to see her u know for that reason he died so fast and not having her by his side, he didnt had a reason to live anymore. that stupid girl I really hate her

Nice but needs more...
by KuroHmiZu
February 4th, 2016, 2:43am
Rating: N/A
Spoiler (mouse over to view)
Truly an amazing story, the characters are very, very interesting. Adel and Caesar has same personalities; pulling Nakaba's hair and like bullying the one they like. I did not mind if Adel and Nakaba were married after the 3 months time skip. My most favorite characters are both Ahkil and Loki, they're cool!!

I felt sorry for Loki when Rito said he was dead, I too could not believe it. The last chapter was like really narrowed down. What I think is he over used his Arcana Powers probably just to see Nakaba. He decided to leave Nakaba because his mission of protecting her is done and he knew she would choose Caesar, if Nakaba chose to "Stay in his arms" then he would not leave her and probably doesn't want to tell her that he was her brother all along. He left because Caesar is know the one who can protect her...
Was this comment useful?  Yes

Angst
by hotarusasaki
October 15th, 2015, 11:15am
Rating: 8.0  / 10.0
This series is so very angsty, most of the characters and most often the 'villains' all have a sad past that isn't just sad but also very interesting and serves as a main internal conflict in Nakaba. It's easy to hate and kill someone 'bad' but she sees the why they turned out that way and also the good through her powers, which in a way makes the plot more have more depth as it's never as simple as black and white. It was an enjoyable read and I found most of the characters likable if not pitiful.... And I have to say near the end the angst game was so strong that it got me sobbing XD The art is also very nice ~ Great series !
Was this comment useful?  Yes

A bit disappointed by the ending though...
by Jasminthe
August 9th, 2015, 2:21am
Rating: 7.0  / 10.0
I quite enjoyed the story but it feels like some things weren't properly dealt with.
Spoiler (mouse over to view)
Like the cruel prince of Lithuanel who became king by betraying his family and the ajin who genuinely loved him. Seriously, he deserved to be punished, but we never heard about Lithuanel again during the rest of the manga.

AND WHAT ABOUT LOKI? I feel this story was soooo unfair to him.
Spoiler (mouse over to view)
After he separated from the rest of the group, Nakaba could have used a bit of her power to meet him sometimes within the Arcana of time. Or she could just have gone see him like she did with Caesar when they were separated. Or just plainly go see him IRL! I just feel he was left out all along, that's too sad. And I actually would have preferred him not to be Nakaba's brother, it makes this story even sadder for him...

Started good but towards the end..
by budlaygid
May 13th, 2015, 6:33am
Rating: N/A
Reimei no Arcana started good until it reached exactly the middle part of the story. I felt that the author just wanted to finish it halfway and tried to make ends meet by using Nakaba's arcana of time to conveniently explain the plot. I felt cheated. What should have been paced in one volume was mushed into a couple of pages. :/
Was this comment useful?  Yes

Beautiful Art, Well Told Story
by NoOneSpecial75
January 3rd, 2015, 5:25pm
Rating: 9.0  / 10.0
Dawn of the Arcana is a very beautiful series with clean art and fantastic character designs. It wasn't until I read it through for the third time that I noticed the background art and action scenes are much weaker in comparison - but the character art is so strong that you may very well not notice.

The story is concise and well thought out, even if it does fall into some old love triangle tropes. I found each character relatable and likable to a certain extent, because we get to see the story from almost every perspective. My one complaint:

Spoiler (mouse over to view)
Caesar's past relationship with Louise was troubling to me purely because of the strong implication that their relationship was sexual, and the fact that he left her without a second thought for Nakaba. This point is greatly glossed over but really… Louise really loved him, even if she was jealous and selfish, but it really seems like he only had sex with her to spite his brother, and never really cared about her. Those are not the makings of a honorable man :/