Login to add items to your list, keep track of your progress, and rate series!
Description
Ryousuke Akiba calls himself ES, a code name taken from a mysterious scientific experiment. He possesses strange mental powers: he can enter people's minds, discover their darkest secrets, even rearrange their memories. Ryousuke is an enigmatic and dangerous creation, but is he the only one? 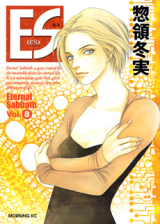 Note: You must be logged in to update information on this page.
Forum Posts Click to view the forum
Akiba or Rei?
over 12 years ago

Too many plot holes
by Sypher Pol
March 30th, 2020, 7:21am
Rating: N/A
Spoiler (mouse over to view)
The final volume was obviously rushed. Its like the author is trying to just throw everything out there without thinking about it too much. First, one of the side characters once said to the female lead that she must have led a happy life to not know what a depressed person is actually going through, and she admitted, then the author suddenly dropped a bomb of the female lead's past being raped. That was too unnecessary. Second, it was not explained why the male lead just disappeared like that. Third, how the female lead acted after just all that without even managing to save even at least the love of her life was too unrealistic I guess, I would've wanted to see a breakdown. Well, maybe she's just strong, but it only made me think that her development in character was weak (I mean how she just purely analyzes people before without thinking).Yeah, all the psychology facts are interesting, but plot-wise, it is terrible. The romance is pretty good though, and it tugs at your heartstrings, only to discover that the author who made this was the author of Mars, and thought to myself "Ahhh, so that's why..."

Not for everyone, but it is certainly for me
by flyingpenguin79
July 22nd, 2019, 11:20am
Rating: N/A
Ahahaha, yeah... I have been reading manga for over 4 years and Mine is one of my favourite characters. But ES is an heavy manga, so if you came here because you saw the romance tag, it can let you down. It has romantic elements during the story, but the plot focuses on human psychology, brain structure, metaphysics... If you are uncertain about your future career, you might think of being neuropsychologist after finishing this. Ahh, one more thing... This manga contains a REAL cold male lead and a REAL cold female lead. So, don't expect such a thing like "Oww, baby... say one more time you love mee, because I really really love youuu..." If you are OK with it and you are interested in fields like psychology, neurology, mechanics (yeah, even mechanics, I don't know why but it could be useful, maybe), it could be the best thing you discovered.
Was this comment useful?  Yes

Masterpiece but Not For Everyone
by StargirlTurtle
July 5th, 2016, 2:10pm
Rating: N/A
Up until the final volume I was very intrigued by the story and character development. Mine is an interesting character, not just a woman trying to be a hero of justice or mournful damsel. Her experiences since meeting Shuro/Akiba shaped her into someone more profound. Their relationship is built on their reliance and acceptance of one another and I find that to be very sweet.
Spoiler (mouse over to view)
While the ending felt rushed, it's bittersweet moments and the culmination of Izaku and Shuro's confrontation was at least satisfying. The open-ended conclusion is not as upsetting as other axed manga. It gives the reader a sense that there is more to Mine's story as she bears Akiba's child. But I did want more cute moments between Mine and Akiba...

I pleasantly enjoyed this complex work of art, and if you liked the author's other works such as Mars, I think this will be a good read.

Pretty good, but...
by MondSemmel
January 22nd, 2015, 4:05am
Rating: 7.5  / 10.0
... weak in many areas.
Some deaths were entirely superfluous and purely drama for drama's sake, like
Spoiler (mouse over to view)
Yuri's and Akiba's. Seriously, such cheap, pointless deaths.
And the overall plot is questionable, too: Throughout the story, everyone knows the location of the antagonist, and so he would be trivial to kill; but for some contrived story reasons, our protagonists don't do it, allowing the antagonist to claim more innocent lives. In other words, it's Batman vs. the Joker all over again: Batman only seems heroic because we forget how many people the Joker killed, which Batman could have easily prevented.

Similarly, the brainwashing power isn't used remotely properly. The protagonists constantly mention that the antagonist could conquer or destroy the world (and he definitely could!), but in the story, the worst he does is cause a tiny uprising.

(If he actually wanted to "destroy" the world, he could simply take an airplane to Russia or the U.S., take over the government, and start a nuclear war. Game over in less than 24 hours.)

if u dont like sad endings dont read this manga!
but if u dont mind a bittersweet (mostly bitter) ending then go ahead and read this... It wuz pretty engaging...

Now m gonna read some shoujo fluff to make me feel good... :I
Was this comment useful?  Yes

one of the best mangas ever?
by pocon
August 30th, 2013, 3:25am
Rating: 10.0  / 10.0
I fully agree with anyone who said the ending seems rushed and sloppy. I'd expect it to be at least 3 more volumes longer to explore more the relationship of Ikazu's with others besides Yuri. The battle between Ikazu and Shuro was made to be unnecessary to be honest. It should have been more epic with more psychology involved.
However, I have to give credit where credit is due. It is by far, one of the most impressive mangas I have ever read.
Anyone noticed that the art looks like Kamio Youko's in later stages (towards the end of Hana Yori Dango or Cat Street)?
Was this comment useful?  Yes

Excellent!
by ordos2011
May 28th, 2012, 11:29pm
Rating: N/A
I like the way everything is connected. The first plot about the high school murderer was not just a random story to make us understand more about Akiba's power, but is in fact related to the story. And this series does not focus on investigation: everyone knows who their enemies are, and where they are. But they don't simply fight , many things happen as well. That's what i like about this series.
However, the last volume wasn't too good, we don't understand how was Kujou's "last secret" is related to the stories, and how it affects her. But it was okay.
Was this comment useful?  Yes

liked it but...
by sarah-eats-cupcakes
March 24th, 2012, 11:10pm
Rating: 8.0  / 10.0
i have two complaints about this manga: 1- i felt that the last volume was weak it was a bit rushed and the author should have atleast made it a bit more emotional...but i liked the ending.
2- the romance...i dont know how to say this but i feel like the mangaka failed at the romance, i mean, i was able to see that they love eachother and all but i felt that some scenes(like the sex scene for example) were misplaced...

other than that, i liked this manga
i love the premise; two people born with the same abilities and same genes, but the environments were different. this had very strong implications about the effect of the environment one is raised in, and the importance of "love". there were many deep messages in this manga, and it explored many issues without neglecting any characters or leaving any plot holes. this manga has few flaws but i respect the mangaka's ability to not leave any questions unanswered
Was this comment useful?  Yes

There is something about this manga...
by Ibleda
February 8th, 2012, 4:10pm
Rating: 8.0  / 10.0
For some reason, despite my love for psychological mangas, I just couldn't fully sympathize and love the characters. I don't mean I hate them, I do like them and I do feel bad for them in the end... but I felt satisfied as well. I have no idea why, but I vented my rl frustration on the manga, and well... realized satisfaction with their misfortune ><...
Spoiler (mouse over to view)
I mean, I literally sighed in relief when Kujou pushed Shuro and called him monster. Even though I feel bad for Shuro's death, and feel pity for Azaku, but I didn't want them to revive that much. I like them, alot, but for some reason I don't feel the same love I have for alot of other characters. From other manga I mean.

That's probably issue on my side, so ignoring that for now. The manga isn't bad, not bad at all. Although a bit awkward here and there, perhaps a bit rushed, but the plot was interesting. And although this might have been the reason for all my problems when reading the manga, I liked how real they portrait the dark side of humans.

In short, it's a great manga. Worth the read definitely. However... there's just something that keeps me from separating it from the rest. Basically, it's a great manga and an average manga at the same time. I have no idea if that is just an extension to my personal problems though.

Profound.
by Jeshia
November 10th, 2011, 10:44pm
Rating: N/A
First of all, if you're not used to reading profound psychological works, don't read this. Read some other things first to get some experience under your belt. If you don't understand what a gem this manga is (whether or not you love it), then it's worth is lost on you, and you should read it later.

This manga breeches on basically everything. It leaves no stone unturned, which is a daring task for anyone. It questions humanity, "what is a human?" and the ability the environment has on the individual, "what is the relationship between society and the individual" among numerous other things. Another thing is that there are no gaps in this manga. It may seem very "thriller-like," but it is far deeper than that. It is not a romance, nor is it romantic. In fact, it would not be a stretch to say that this manga mocks the romantic view of life.
The characterization is just wonderful, and the struggles the characters go through unearth startling, possibly valid conclusions about the meaning of life and humanity.

Note: This manga is highly disturbing as well. If you are completely grounded in your own views, don't bother wasting your time even trying this–– you won't understand it. This manga requires a looser mind to really understand even half of what "really" goes on in it. It goes against the basis of religion, the overarching meaning of life, and even the idea of a natal conscience.

That said, if you feel like you can handle it, read it. I do not exaggerate the amount of depth inside it, nor the requirements to truly understand it.
Was this comment useful?  Yes