Login to add items to your list, keep track of your progress, and rate series!
Description
Sakura Hayato is a fairly normal high-school student. Except for one thing: ghosts are attracted to him.

On his 17th birthday, as his ghost problem reaches a peak, he encounters a sly-looking blond man in fancy black garb who introduces himself as "Undertaker Riddle." Riddle offers to help Hayato with his ghost problem on the condition that Hayato become his partner in the undertaking business, which is responsible for sending earthbound spirits to their destined place of final rest by way of a special funeral service. Though he initially refuses the suspicious proposition, circumstances soo... More...
Sakura Hayato is a fairly normal high-school student. Except for one thing: ghosts are attracted to him.

On his 17th birthday, as his ghost problem reaches a peak, he encounters a sly-looking blond man in fancy black garb who introduces himself as "Undertaker Riddle." Riddle offers to help Hayato with his ghost problem on the condition that Hayato become his partner in the undertaking business, which is responsible for sending earthbound spirits to their destined place of final rest by way of a special funeral service. Though he initially refuses the suspicious proposition, circumstances soon come to pass where Hayato has to either accept a soul bond with Riddle... Or lose his life. Less... 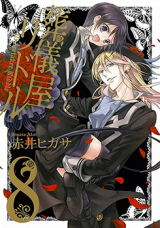 Note: You must be logged in to update information on this page.
Forum Posts Click to view the forum
Vote for Undertaker Riddle to resume scanlation
over 8 years ago
Ends in Chapter 46
over 9 years ago
Shonen Ai?
over 10 years ago
Is this really shounen?
over 11 years ago

It's quite enjoyable
by Misericordia
July 25th, 2014, 6:18am
Rating: N/A
It's not the most original plot and there are a lot of similarities to MF but Bleach and Naruto rip of each other all the time. I read this while waiting for new chapters of Sekai and Junjou to be released and I didn't think I would like it as much as I do now. The art is very good. If you like supernatural ghost stuff then you should read this.
Was this comment useful?  Yes

the art and character design are exciting! it's killing me! i mean, just how many beautiful guys can you have in one manga?!!

the relationships between partners have very deep reasons, not like some other mangas, for childish goals! also partners don't fall in love with each other out of nowhere!
and gradually revealing the past of each character is so catchy.

the plot seems so realistic to me, like the part in which Dante was saying farewell to his younger brother. and while preparing his funeral march, he actually was saying goodbye to all his family's members. it almost made me cry!

i've read over 100 mangas (including MF) and i don't see ANY similarity between this an any of them. only in art, it reminds me of Number (even though Riddle's better). if you don't like this, then don't! sometimes there may be a problem with YOUR taste not the manga.so when you're not interested in a good manga, please don't make funny excuses...

overall, i strongly recommend this to people who - like me - are done with ugly art, shallow plots and childish characters. (i don't mean all mangas out there, of course. i have read so many and liked many)
Was this comment useful?  Yes

Give it a try!
by mashimaro12345
June 11th, 2012, 1:40am
Rating: 9.5  / 10.0
First of all, this manga is really good.
The art is awesome, except that the main character Hayato does not look like a 17-year-old at all. He looks like a kid. Still, there are many exiting moments in the manga and the fighting scenes are awesome. Not too much to bore the readers.
There is proper character development, though I would like to know more about Riddle and have more of him being exposed. He's very suspicious.
The whole thing about the Arcana should end soon, and I hope that the author will not be doing this manga revolving around Arcana alone.
Hayato is too cute for my liking, but he's the most likeable character in the manga most of the times. And the most useful too when the other part of him emerge.
Overall, the manga is very intriguing and I can't seem to understand why isn't it more popular. Everyone should give it a try and you'll find yourself addicted to it. And it's not exactly shounen ai (in my opinion) and it's actually more towards shounen. Still, I wish that this manga wouldn't be so serious as compared to the beginning of it and the author should have given some lighter moments in the manga.
Was this comment useful?  Yes

I dunno...
by dezin19
December 30th, 2011, 10:56pm
Rating: 9.0  / 10.0
I read Monochrome Factor and loved it (up until the ending which was kinda...lacking something I think).
I never even thought of these 2 manga as similar until reading previous comments here. The plot, in my opinion, isn't much like MF at all. If you're comparing the fact that in Undertaker Riddle they lay to rest spirits/ghosts to MF's beating up shadows...well it's like saying every manga is the same as every manga (and don't even get me started on excorsist manga :/ ) And, yeah, you can find something similar in pretty much any two manga you compare...I will say, though, that if you are looking for the similarities between UR and MF there are some; I won't deny that. But it's not necessarily a bad thing if you liked MF.

Anyway, this is just my opinion. I found Undertaker Riddle to be a little unimaginative at times (see 95% of manga) but something makes me keep reading it so it has to be good enough for that. I would say try it out for yourself before deciding whether to read something or not. I find that people's opinions on stuff have nothing to do with how good or bad you'll find a story/manga/movie/whatever.

PS Why the heck is this under shounen? I would say it's definitely shoujo...

Awesome!
by gdtr
October 22nd, 2011, 10:16pm
Rating: 10.0  / 10.0
I love this! The art absolutely SLAYS me...OMG are the guys hot (the art reminds me of Black Butler or Pandora Hearts). The plot is interesting, with lots of exciting battle scenes. The characters are fun, too. And the tension between the main char and his partner alternates between being super sweet and SO INCREDIBLY HOT!

And unlike the previous reviewers, I didn't see much besides a superficial plot similarity between this and Monochrome factor. (Unless you're saying that all mangas with a cute dark-haired boy and a cool blond-haired partner are copying each other 9_9).

Overall I definitely recommend this!!
Was this comment useful?  Yes

LOVE IT!!
by whitetorn
August 28th, 2011, 9:21am
Rating: 10.0  / 10.0
I personally quite like this manga. The art is beautiful and I just absolutely love the characters! Sure, it was kind of obvious that many ideas are pulled from Monochrome Factor, but personally I find this more enjoyable to read. I just absolutely love Hayate and Riddle, much more than Akira and Shirogane.

A clone of "Monochrome Factor"?
by tartufo
February 22nd, 2010, 1:52am
Rating: 5.0  / 10.0
Sure seems like it. The character templates (mysterious, pale, long-haired, non-human guy and stubborn, dark-haired teenage boy) are identical, as is the dynamic between them, to a great degree.

Ordinarily, this would have been a decent manga, but since it seems so UNCANNILY similar to Monochrome Factor, I just can't bring myself to enjoy it; everything in this manga seems to have been done before, whether through conscious plagiarism or merely by accident.

Either way, I found this far too unoriginal to enjoy it in the subtexty spirit it was intended. And for someone who enjoys subtext as much as I do, believe me, this manga would have to be REALLY boring for me to drop it! And it's not boring because of it's plot, per se, but because of how IDENTICAL that plot is to another manga's. Just. Yeah. It feels like there's nothing new here for me to enjoy. Sure, it's ghosts this pair has to banish, instead of "shadows," but isn't that still too similar?

Sorry! This one isn't for me.