Login to add items to your list, keep track of your progress, and rate series!
Description
Sweet young Kai and the doctor Maria shared a bond that they thought no one could destroy...until Maria's brutal murder tore her from Kai's arms forever. Now, Kai wanders the pitch-black streets of the inner city searching for the man who stole Maria's life. But will he end up a pawn in a gang war that will force him to fight for his very existence? With both a mysterious electronic frequency and a strange, powerful man named Lahti shadowing his every move, Kai must slay his new-found enemies...or fall prey to their desires. 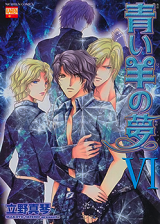 yay
by cherrykookie
March 26th, 2011, 10:11pm
Rating: 9.0  / 10.0
I read steal moon first which then it led me to this manga since as it was the 'prequel'.
I must say, i liked this a whole lot better than Steal moon. In Steal moon, the characters were under developed, (especially coyote) so i didn't feel anything for them. However i love the visible emotion that Kai and Ratri display in Aoi Hitsuji no yume. They're both such sexy characters! Kai screams sexy angst woot! I also don't mind the woman playing a big part in this manga either.. dosen't bother me one bit. I think its what makes the manga interesting, as the single woman is what makes all three of them connected.

A tad bit of spoiler maybe?
by mizunosaki
July 15th, 2010, 3:50pm
Rating: N/A
Aoi Hitsuji no Yume, along with other titles in the series (Steal Moon) is a sci-fi total alternate universe kind of story. Which means that unless you really get into the story, it's not really that great. You have to immerse yourself in the story universe so that you don't question a lot of strange turn of events. The plot gets convoluted in my opinion, and you really have to imagine a flowchart in your head (wait, who wants to kills who and why again?). This can be a good thing or a bad thing. For fans that likes to see a bit more story other than "I love you, you love me, let's have sex" plot, this is for you. But if you're into straightforward romantic drama, you might be better off reading something else.

The story does get a little bit sappy. The uke cries a lot for someone that's supposed to be strong (then again, ALL ukes cry a lot -_- *sigh*) This is one of those series where you see a lot of bed scenes but only have the love confession at the end - heck it wasn't even a love confession per se :\ I guess seeing that kind of ending does make me a little bit biased, but reading Steal Moon should help you see a glimpse of 'what happens after' kind of thing.

I think it's interesting that Makoto Tateno let a woman play an important part in the series (a totally badass role too), because in other BL titles woman seems to always be 1) the evil evil seductress that disturbs seme/uke's relationship or 2) mindless groupies to emphasis on a seme/uke popularity or 3) crazy fujoshi that seems to always push seme and uke together. Viharin can prooobably be categorized as 1.

BUT on the flip side, this gets complicated. Raati likes Viharin but can't because she's his sister. Maria and Kai was in love with each other. Now Maria/Viharin is trying to kill Raati, and Kai is trying to protect Raati. Kai got framed by evil incubus-uke boi and got chased off by Raati, Maria found Kai and they were together again for a while. Then misunderstanding cleared, Raati and Viharin tried to kill each other again, this time Kai protected Maria and... Wait, what?

If after you read this your initial thought is "

", you grasped the spirit of the series.

The thing about Makoto Tateno is, she likes to build a web that creates her own universe. Like I previously mentioned, this is not something you would read in a passing because you wouldn't get what's going on. This is something you need to read and immerse yourself into. Just like in her other series, you're not going to see a straight happy ending, but instead you will see the long winding road for them to get to that ending. That's why in a lot of her series you'll see the main character ending up with someone unexpected, only to come back to the main pairing... It's confusing yes, but if you're into complicated romantic dramas, you've found your favorite author.

Yeap!
by LC13
May 12th, 2010, 7:02pm
Rating: N/A
I love this one. Honestly, I think this is much better than Steal Moon. People are right about Steal Moon being Rush. This one is more intimate and the storyline is much better. I just think that Maria don't love Kai; only memories that she love, just like Kai. I read the whole thing and love it even though I don't understand the raw. Anyway, I hope Volume 4 isn't the end of this series.
Was this comment useful?  Yes

Excellent.
by tartufo
March 7th, 2010, 5:34am
Rating: 10.0  / 10.0
Let me first respond to the previous reviewer, because as much as I agree with them about the artwork being lovely and all, there is one point they make that I must dispute...

Frankly, I don't understand why blueseeker is displeased by women in yaoi - there are women on the planet, you know? I think that only makes the yaoi more realistic in this manga, since there are actually women who also play an important role in these men's lives. Because to find anyone in whose life there are NO important women or alternatively NO important men is... kind of impossible. We don't live in a mono-gendered world, right? I far prefer this type of yaoi to weird little fantasy-worlds that are all-male and where women do not exist.

As for the bit about intimate scenes - I can see how blueseeker might want more of them if s/he has read the earlier volumes only, but later on the number of such scenes does increase. By a lot.

It's never hardcore, though, if that's the issue... There are only softcore scenes at most, and they always have to do with the plot; they're never just there for the eye-candy. That's actually why I like them, though... They're more emotionally effective this way, since they have relevance to the plot and to the characters' emotional states.

I also just wanted to say that the plot is really complex and scintillating, very dark and psychological and full of every conceivable variety of heartbreak - each of them very well-done, not "weak" melodrama at all but developed properly and handled with subtlety. The whole social structure of this sci-fi society is also really well done, very comprehensive and genuinely intriguing to anyone that likes good and coherent world-building. But I should warn readers that later on (in the raws - I've read ahead to the end of vol 4) there are some pretty bad things that temporarily happen to Kai, so if you aren't fond of character torture happening to your favorite character and even to the main character, then... This might kind of freak you out. @_@; It even freaked ME out for a while, and I was sitting there with my hands clapped over my eyes, saying: "No, no, no..." Gah. ;_; Yeah, I'm pathetic. Lol. Another addendum is that some of the characters are pretty messed up internally, so romantic/sexual fidelity isn't always a constant. If that bothers you too, then once again, this might not be your style of manga - but that's also the reason I actually LIKED it, because this isn't some sort of glossed-over romance where things go straight from the confession to the bedroom without a hitch, but a complex story of how agonized and flawed people's hearts can actually be.

A very tragic tale - it doesn't end tragically (yay!), but everything before that is tragic. Lol. So if you're not fond of angst then you should steer clear of this - BUT if you like your plots interesting and your characters deep and full of rich personal histories, and if you like manga that you'll actually remember for a long time because it's so good, then this is for you.

I prefer this to the inexplicably licensed sequel, Steal Moon, which feels rushed in comparison and doesn't really go into the nitty-gritty of WHY that lead couple (Coyote/Nozomi) is together, or why the plot ends the way it does - I would have preferred a longer manga to really tell that story and explore the characters' dynamics a little deeper. I mean that manga's still decent and enjoyable, but it's not great... Whereas this manga IS. Great, I mean. I think this should have been the licensed one... Heh. Well I'm glad that Steal Moon was licensed anyway, because any of Tateno-sensei's works being licensed and therefore bringing her more financial support and international exposure is a good thing for me, too, as her fan.

women in yaoi
by blueseeker
March 2nd, 2008, 6:08pm
Rating: 8.0  / 10.0
This story i enjoy it mostly because of kai, but i really do not like the fact that there is so many women involved and one in particular holding such an important role. Aside from that i really like this mangakas artwork so it was pleasing but i wished there were more intimate scenes.
Was this comment useful?  Yes