Login to add items to your list, keep track of your progress, and rate series!
Description
A self-proclaimed angel decides to intervene with a boy's love life, starting with a timer on a boy's arm, which will count down every time the boy's heart beats from interacting with his crush starting from 10. At 0, the boy will confess everything he is thinking at that moment. But it only starts there! The 'angel' has powers based on the number 10, and grand the boy the ability to stop time, make someone fall in love with him, learn who others like, and more. With comedy, romance, and drama, this is not a typical shounen series and should not be passed up. 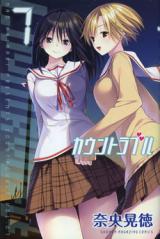 Note: You must be logged in to update information on this page.
Forum Posts Click to view the forum
7 volume (end) = how many chapter?
over 9 years ago
Anyone hate her as much as me?
over 10 years ago

Better Than Other Magic of the Week Stories, with a Sweet Conclusion
by DoujinHunter
September 20th, 2015, 8:32pm
Rating: 8.0  / 10.0
This manga uses the standard magic-of-the-week in many chapters to give the readers something to read, but more often than most manga of the same genre uses these to move relations forward. In addition to this, characters are hesitant without being such to the same frustrating extent as comparable ones. There are also some rather touching moments, though they are often subverted for comedy. I very much enjoyed much of the comedy in the story and found myself smiling and laughing much more than I have with similar stories. The ending was also a nice note on the relationship between the main characters, using the magic-of-the-week to strengthen it for the difficult times to come.
Was this comment useful?  Yes

Enjoyable read till near the end
by RS456
June 5th, 2015, 2:04am
Rating: 7.5  / 10.0
Enjoyable read until the main character gets together with the girl he was aiming for since the beginning. Them becoming a couple didn't really make any sense. It was somewhat abrupt. Reading the chapters before they become a couple it seems pretty obvious it was either his childhood friend or the magic girl or harem. Near the end of the manga they completely changed the personality of the girl he was aiming for to quickly make them a couple which is not really a good job on the writer's part.

surprisingly great
by whitespade
August 23rd, 2014, 9:20pm
Rating: 9.2  / 10.0
this seems like a normal fare of weak boy trying to get the attention of popular girl - and it is true in its normality, but the execution is impeccable. all due to the characters being who they are, acting the way that show the most warmth there can be. the angel is the best character of them all, she never change from her brattiness and ditziness, and that makes this manga 10 times better when her every magic fall apart. nice art and i like the ending.
Was this comment useful?  Yes

short comment (recommended)
by MatrixM
July 6th, 2013, 8:01am
Rating: 7.5  / 10.0
Originally ranked this a 9 when it first started. I just loved all the spells and how original the series was. It definitely goes downhill, though. Especially when the inevitable happens.
The last two chapters were a nice close to the series, though 100 times doesn't seem that many times to me

ends
by zleonlelouch
May 19th, 2013, 9:17am
Rating: 7.5  / 10.0
Spoiler (mouse over to view)
just read the ending....
well, I found this manga fun to read, even with an almost loop story, just like reading a doraemon but with many different style though
its not bad, but its not really good either, at least I enjoyed reading it, it has been fun and amusing seeing how the main character tried to progress his love with desperate though...
I like seeing a story by not ending it just when or suddenly after they become a couple, I like to see them enjoying their life, getting another conflict even after becoming a couple (kimi iru?)
maybe the mangaka himself had already known that if this going much further it will become boring so he decides to end it like that, and it still looks good ending according to me
all ends well, farewell Kouta, Farewell Yoshizawa Akino, farewell countrouble thx for giving us fun light reading
Was this comment useful?  Yes

So much fun at the beginning
by SiMiK
October 17th, 2012, 4:56am
Rating: 9.0  / 10.0
The manga starts very well off, it's both interesting and funny. Yet I get the feeling that the author didn't really thought it would have such a success and would continue on being released. Later on it really does start to feel repetitive and it seems it lost its way as the story probably should have already ended and/or should focus more on the relationship between the main characters. Well, I hope it won't get dragged for a long time without an idea, Nao probably should have thought more about how he wants to end it before it got into this cycle.
Was this comment useful?  Yes

It gets boring after a while...
by manga-fan1
April 16th, 2012, 4:09pm
Rating: 4.0  / 10.0
I am caught up with the translations at 29 chapters and i started when there were only about 15 chapters out. After keeping up with it for a while, it is starting to get pretty boring, and only getting worse as i go farther in, to the point where i am no longer enjoying it all except for random moment. When was the last time they even used an angel device when that was this manga's selling point. Although the end of chapter 29 may turn the tides depending how it turns out. My favorite harem member hasnt even shown up in like 6 or 7 chapters, the manga is pretty much over because he picked a girl already and theyre together, but they just keep dragging it on, and on, and on.

Make it to chapter 25 before you judge this manga, it's has excellent humor. At least enough to tide over the slow pacing all shounen romance has.
Was this comment useful?  Yes

Unfortunately after the twenty chapter or so I don't see anything particularly outstanding and found the series to be dragging its feet and now just wish the endless push and pull end already.
Was this comment useful?  Yes

Far better than I expected
by alphaGulp
August 12th, 2011, 11:17pm
Rating: 8.0  / 10.0
As others said below, this is far better than the premise suggests, in part because it doesn't devolve into a lame ego-boosting harem.

The characters generally behave coherently (even if the 'angels' are out of whack and bring in lots of zany fun) and the relationships are complex and evolving. I also like how the main character has a fair amount of moral fortitude, even if he does at times succumb to minor temptations. In particular, throughout his 'forced' pursuit of his love interest, you'll see him do nice things, sometimes in sacrifice, and hence you get the sense that it is actually believable and natural for his relationship with the girl to be progressing.

I have a feeling that in the end the author will make love blossom naturally, without any angel-created magic, as indeed anything else would be a type of mind-control and (essentially) rape. As ugly as that last word is, I hope you'll understand how in fact this manga is about the absolute opposite, and that the characters are all genuinely nice people, which makes for good story-telling, IMO.
Was this comment useful?  Yes