Login to add items to your list, keep track of your progress, and rate series!
Description
Seiji Sawamura is the toughest seventeen-year-old in town, feared by all for his fighting prowess and his deadly "devil's right hand." But at heart, Seiji is a softy, and all he wants is an end to his seventeen-year history of being a lonely single guy. Unfortunately his tough-guy reputation only serves to decrease his popularity with the ladies. But what happens when one day, his right hand becomes a girl?! 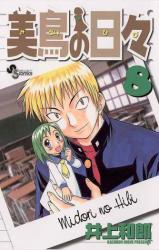 Note: You must be logged in to update information on this page.
Forum Posts Click to view the forum
Midori no Hibi Anime
over 13 years ago

Very funny, very touching, lovable characters
by DrunkenPeasant
September 25th, 2015, 10:18pm
Rating: 8.0  / 10.0
Man I truly regret having skipped this title for so long, I remember reading the premise a loooong time ago when the scans first released and thinking to myself that it was going to be a generic shonen-romcom. But boy I was wrong, because this series is funny as hell.

First, there isn't one character I particularly dislike here. At worst, I'd be indifferent to a character, like the twin tail elementary girl or the american girl, but most of the time I found myself getting attached to all of the characters. They're just so likable, especially the MC and the girl on his hand, they're two characters that really have nice chemistry.

The synopsis was something different and caught my attention but it was the characters who really managed to retain my interest. They were genuinely funny especially Kouta. Main character Seiji is likable enough as a misunderstood delinquent who is suddenly thrown into funny, awkward and many a times emotional situations with Midori, Kouta, Ayase and various other character. Though this kind of character has been done to death by now. There was great character developments as well even for someone as minor as that weak henchman of Seiji who always manages to get himself kidnapped.

Ending was good too. Feels bad for certain someone but such is life.
Was this comment useful?  Yes

The story
Sawamura Seiji is known as Mad dog and is the strongest delinquent in the city. Except for his sister. But he only wants one thing: a girlfriend. After another rejection, he wakes up and to his surprise, a girl is attached to his right hand (getting cr*p past the radar). The girl, Midori, confesses that she always liked him, but was too shy to say it out loud. Midori quite likes the fact, that she is now Seijis hand. He is against it, but will get used to it. The story continues with their everyday lives together.

I wouldn’t say it’s a gag manga, but some chapters were totally random. Not a bad thing at all.

Art
Very good. Above average shounen art. There was not that much of panty shots, which was for the better. But it was forgettable and not very original (the art). Generic shounen.

Characters
For me, characters are the most important thing in every fiction. And here, the characters were great. Sawamura Seiji kind of reminded me of Harima Kenji. He wasn’t that cool though and I also don’t like him that much. He was too kind, seriously. Misunderstood delinquent, who only wants love. I'm not surprised there were so many girls (and boys) in love with him.

I hated Midori though. She was helpless, selfish and… well yeah, she was selfish. She didn’t worry about anyone but herself and Seiji. She didn’t care that there are people worried about her. Also, I don’t like these happy characters.

I have to write about two more characters, because they are my favorites.

Shingyouji Kouta-kun!!! aka how to add shounen-ai to a shounen manga. I don’t even know what I like about Kouta, but the chapters about him were seriously funny. He is a guy that attracts troubles. Or troubles attract him. Anyway, his falling in love with Seiji was hilarious.

But the place for the best character definitely goes to Ayase. Ayase was holding the whole story together. Best chapters were with her (or Kouta). She is such a sweet girl. In school she is the annoying know-it-all, but you can see that the character was very well done. She plays with stuffed animals. Just look at her room, so cute. Her love to Sawamura was so pure and romantic. Really, the most romantic scenes in the manga were with Seiji and Ayase, not Midori. She is strong, kind of irrational (especially the “I saw him first” reasonings), pure hearted and righteous.

Enjoyment
Good and funny manga. I recommend it to everyone. Seriously, go read it. I as a girl liked it, so if you just stay away because its ecchi or shounen, don’t.

So about the low score:
Spoiler (mouse over to view)
I really hated, that he didn’t choose Ayase. I cried the whole chapter, when she confessed to him. (The second time). Seiji and Midori aren’t such a good couple. It would be a lot better if he chose Ayase, Midori realized that the first love never last and so on… Even Kouta would be better. I know, the story was about Midori, but she just doesn’t deserve him! Poor, poor Ayase. Let me hug you. *hug*
Was this comment useful?  Yes

Actually Heart warming
by Green Mylle
January 7th, 2015, 2:28am
Rating: 8.0  / 10.0
I remember watching the anime back then and cried on it. I also remember repeatedly singing the opening and ending song and even buying the OST of Midori Days. Man, how I love the anime version.

It's funny, characters have good development, and actually romantic and heartfelt. It's warm, you could really feel the love of Midori for Seiji-kun.
A really nice blend of humor and romance.

And yes to the person who said, it hasn't lost its charm. Because it's worth a second try.
Was this comment useful?  Yes

the right stuff
by AmDnim
April 1st, 2013, 11:55am
Rating: N/A
really good, really unique, really heartwarming
if you've been reading all action all the time, take a break and revel in this manga, it wont disappoint
hell, whatever you're reading, give this a try
Was this comment useful?  Yes

Character descriptions and development are somehow lacking, since the author decided to take the "easy path", and the core of the manga can be contained in no more than 10 chapters. No deep stories, side plots or wicked developments (the main plot does not offer much room to that anyway). Still, the remaining ones are full of gags and funny situations, and the reading is easy.

What makes this manga really interesting is the balance between romance and comedy.
I would change the tags and categories, btw. Ecchi tag is somehow exaggerated, you won't find more than a bunch of inocent panty shots and a nipple showing. And so is the "multiple relationships" one, it would be better to say multiple crushes...

I've been reading manga for quite some time, so I'll give it a 7, but that by no means implies lack of quality, on the contrary. Very simple in form and style, so I decided to deduct some points.

Really funny and Unique Manga
by bull3thole
April 30th, 2012, 6:48pm
Rating: 8.0  / 10.0
The plot is very different in a good way. The main character guy suddenly finds out a girl becomes his hand and the author executes the plot perfectly.

I really recommend this manga because you will laugh your butt off and the plot is quite different.
Was this comment useful?  Yes

Hilarious!
by bluedrop
January 14th, 2012, 2:52am
Rating: N/A
Very funny and entertaining. Although I kept putting off reading this for a while, I'm so happy that I'm reading it now...it's just, I keep waiting for someone to make the comment that first popped into my head when I heard about this. The ecchi tag didn't help either.

BEST
by sirsosss
July 13th, 2011, 1:39am
Rating: 10.0  / 10.0
simply one of the best mangas i've ever read. i finished this manga in one go. it was funny, cute, and very satisfying. when i first saw this i was like, wth, right hand girl? how lame!, but after i read about 10 chapters, my attitude completely changed. the ending (which for me is the last 10 chapters) are brilliant. it is very touching, heart warming, and could easily make you cry, yet, it was kinda a happy one.
definitely worth your time, no question about that.
Was this comment useful?  Yes