Login to add items to your list, keep track of your progress, and rate series!
Description
From Go! Comi:

In today's world of computers and cell phones, few people have time for superstition and ghost stories, but that doesn't mean that they aren't real! Amane Kamori is a powerful medium from a remote village in rural Japan. Her guardian is Hyoue Inugami, a demon dog whose powers are literally fueled by her kiss! Together they protect humans from vengeful spirits and bring peace to the dead.

But when Amane's family moves to the big city of Tokyo, all the magical power in the world can't help her survive high school! Her chilly demeanor and lack of social graces make her a campus m... More...
From Go! Comi:

In today's world of computers and cell phones, few people have time for superstition and ghost stories, but that doesn't mean that they aren't real! Amane Kamori is a powerful medium from a remote village in rural Japan. Her guardian is Hyoue Inugami, a demon dog whose powers are literally fueled by her kiss! Together they protect humans from vengeful spirits and bring peace to the dead.

But when Amane's family moves to the big city of Tokyo, all the magical power in the world can't help her survive high school! Her chilly demeanor and lack of social graces make her a campus misfit. Popularity comes much easier to Hyoue, whose sexy good looks (in his human form) bring him lots of female fans. But Hyoue's lapdog loyalty to Amane only leads to more woe, as jealous classmates can't understand what he sees in her. If only they knew? Less... 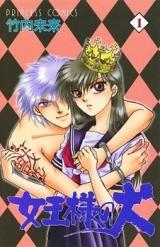 
Category Recommendations
Kainushi wa Akuma
Princess to the Rescue!
The Demon of the Mansion & Me
Seirei Tsukai no Kenbu (Novel)
Dusk Howler (Novel)

unexceptional, but enjoyable.
by formosa
March 7th, 2013, 2:19pm
Rating: N/A
I find it difficult to review this manga. Is it brilliant? No, it has none of the elements that make me treasure a series for being unique or very meaningful. But, that said, it is engaging enough that even though it's imperfect, you may well find yourself invested enough to read until the end. If you're generally into supernatural shoujo romances, try it and see for yourself.

The characters are unusual in the sense that the shoujo heroine isn't clingy and love-obsessed, and has powers and secrets of her identity that could have been explored further but are really vital to how she acts. She fights with her family obligations and the right to choose her own destiny, including who she gets to love. Yes, the romance does make a fuss where it could all be dealt with more simply, but that's pretty standard for shoujo.

The artwork is decent, I do like that Takeuchi's work looks distinct and doesn't merge with the masses of shoujo artists you just can't tell apart. Often I feel shoujo is a genre where technical drawing ability can suffer (shonen tends to realism slightly more), and I've seen some shoujo artists who, if we're being honest can't draw. Takeuchi isn't particularly realistic nor is her artwork anatomically perfect, but her style is polished enough for the stories she tells. I have read some of her later work, and it does improve further.

In summary: decent supernatural shoujo romance, check out if you like that sort of stuff. It's not exceptional, but you might be surprised to find you enjoy it anyway.
Was this comment useful?  Yes

It's okay
by zengoats
January 20th, 2013, 4:55pm
Rating: 7.0  / 10.0
I can understand why people like it, but it doesn't really have universal appeal. Don't get me wrong; fans of the genre will love it. But for me, everything was just passable. The characters aren't anything special, but they're cute. The plot's so-so. The manga doesn't really try to achieve anything beyond entertaining the reader, which I appreciate. It knows what it wants and doesn't waste time trying to be profound.
Her Majesty's Pet is good for people who're into master-servant romances with a supernatural twist, but it's nothing spectacular.
Was this comment useful?  Yes

Dammit
by bluedrop
April 11th, 2012, 5:56am
Rating: 7.5  / 10.0
I really appreciated this because the leads are unique in their own way and the premise was nice, the humor was awesome but crapdammit!!

I agree with workshyslacker! The one thing that really pissed me off was that I just kept feeling sorry for Hyoue, kept screaming at Amane whenever she kept hurting him
I don't care if she's lovable, she really is, but dammit!!
She keeps throwing Hyoue away!
Spoiler (mouse over to view)
The first time she really hurt him when she sent him home got me so mad, I kept feeling bad for Hyoue in so many instances after that, I wanted him to get a new master just to hurt idiot-Amane

Spoiler (mouse over to view)
It took, what, 8 freaking volumes to get it through her thick head that she hurts him??!?! That she's the one who betrays him, unconciously or not?!?!

Then right after her huge one page enlightenment, she goes on and doubts him anyway?!?! Even the whole thing about him listening to her but her not trusting him enough to believe what he says out of concern is just...aaaaaargh.

Amane is a great girl, she really is. It's just...there's a whole load of things the mangaka says Amane is like really strong but she is rarely portrayed as such. Even the dynamics of her relationship with Hyoue is just imbalanced for me.

I am a fan of hero grovelling in romance(usually in books and yaoi) because I want the hero to realize how lucky he is to have the heroine and appreciate how much the heroine has to put up with his asinine self. Here, it's reversed because you could say Amane has the upper hand in the relationship so I pretty much wanted her to do something about it.

It's always Hyoue trying to climb up(like in yaoi where the uke is the one striving for the seme's love) and Amane does little to help.

Still, overall, I enjoyed it. It was a great read. My heart broke a few times for Hyoue and Amane is quite likable most of the time. Not a bad shoujo.

I got irritated by this manga...
by workshyslacker
December 12th, 2010, 4:10pm
Rating: N/A
...even though the background plot was good, the art kinetic (for a shoujo) but I've never been put off by such an emotionless female lead that never gave enough of herself to the male lead. It's always Hyoue trying to prove himself and going that extra mile whereas Amane is quick to doubt him and cut off all ties if those around her criticise him. I felt very sorry for him and can't understand what he would see in her (except that she's obvously gorgeous). After a while I just wanted him to tell her to get lost and find another master.

And Hyato, her cousin, is equally annoying.

Still, its a good read if you don't concentrate on the irritating one-sided romance.

Don't know what the previous comments were about...
by Keilis
December 4th, 2010, 4:22pm
Rating: 8.5  / 10.0
... But I think it's a shoujo done right. The heroine's NOT simply dependent on her love interest, but treats him as a battle partner as opposed to saviour. She's quiet, assertive, and doesn't flail her emotions upon other characters like what many heroines from other manga do. The story's episodic at first, but that changes after some time. The art is GORGEOUS (finally, a shoujo mangaka that can fuckin' DRAW), the humour's endearing, though the side characters could have been more memorable. It may have cliches, but at least it acknowledges it.
Was this comment useful?  Yes

really meh...
by lifelessidiot
August 19th, 2010, 12:56pm
Rating: N/A
true I'm not so far into the manga yet, but I already feel like the mangaka could started the story way better. I understand what's going on, but there's no depth to it and it feels almost as if the perported main characters are sharing their spot with a random side character. I usually love shoujo and can't get enough of it but this....this is just.... uhhhg. its too boring. The characters are flat. The relationships are going nowhere so far. The story seems to be stalling and not really going anywhere either. I simply cannot bring myself to finish this right now. I may edit this if I pick up the series again. We'll see how it goes. /:
Was this comment useful?  Yes

Weak Heroine
by Divina=^.^=
February 28th, 2010, 9:03am
Rating: 6.0  / 10.0
Spoiler (highlight to view)
11 volumes and not one manifestation of the heroine's purported power. Lauded in the beginning with all sorts of allusions to her 'light' which is the strongest of all, to her power, which makes her fellow villagers cower in fear, the heroine ends up being a meek weakling, constantly bending to the will of others and to her own worries. Did the mangaka have a change of heart after the first couple of volumes? Sure seems that way. This heroine is PATHETIC and that is the grandest flaw of this manga. Further, the mangaka fails as a story-teller. Like a bad dj who irritates clubgoers to no end due to being unable of manipulating the levels of energy through the music well, so the mangaka can't find a balance between suspence and boredom. Last but not least, even though she's managed to create interesting and likeable characters, they never quite manage to draw the reader in because the mangaka has neglected to include any inner dialogue/inner world enlightenment and the reader is left without access to any insights to the emotional world of the characters. I gave this a 6 which is a lenient rating. It should have been lower, but I decided on a 6 because the premise is very interesting (powerful female heroine, demon servant). Too bad it only stays a premise and fails to deliver. This could have been good.
Was this comment useful?  Yes

mediocre
by prettykitty20034
December 4th, 2009, 3:00pm
Rating: 6.0  / 10.0
It didn't leave much of an impression on me. I thought the characters were underdeveloped and the plot really didn't go anywhere until the last two volumes. I did enjoy those last two much more than the rest, but I don't advise anyone to read throught 9 volumes of "meh" just to get to the "good part".
Was this comment useful?  Yes

Worthwhile
by atomdreamer
March 23rd, 2009, 7:06pm
Rating: N/A
Admittedly it's nothing life-changing, but it's the first shojo manga to really keep me hooked in a long time. The hero is a delightful tough-guy/softie combination, the heroine is an amusing mix of naiveté, perceptiveness and courage, and their relationship is fun and heartfelt (even if it doesn't seem to really advance much).

It's a sweet, engaging romance for any shojo lover, especially if you like overprotective boyfriend-types, guardian-master relationships, demon fighting and humour.
Was this comment useful?  Yes

really good
by lynn101
September 20th, 2008, 4:48pm
Rating: 9.0  / 10.0
i really like it..the relationship between Amane and Hyoue is also really cool
i like how it's sort of forbidden and i love the connection they make to Beauty and the Beast...
the heorine is also pretty awesome...strong and smart!