Login to add items to your list, keep track of your progress, and rate series!
Description
From Nevermore Scans:

Ayahatori--that is the name of the family possessing a mysterious power. They have the power to summon and use beings and people from secret ancient writings.

During the Ayahatori initiation ceremony, high schooler Kozakura Saaya summons one of the three most beautiful women in the world, Ono no Komachi. However, what appears in front of her is a man with matchless beauty!? 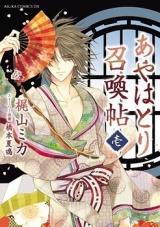 Convoluted story, lack of world-building
by Divina=^.^=
February 18th, 2016, 7:10am
Rating: 8.0  / 10.0
This had the potential to be excellent - original story, really great art, tropes more often found in shounen manga (a load of bishounen following the female leads commands, living under the same roof with her, etc). The great art combined with the reversing of tropes and the unorthodox male love interests is also what leads me to give this a high score.

However, this manga also suffers from some terrible flaws: The story quickly loses direction - the mangaka seems to change her mind over and over again about what this story is about (friendship? love? changing weaver-culture?) or even who the main villain is. Perhaps as a result there is little to no world-building, which makes it kind of impossible to tell a supernatural story successfully. By the end of the story, the indecisive plot has become so convoluted that major plot points are very confusing or even impossible to understand. By the end, there are also too many things left unresolved and/or unexplained.
Was this comment useful?  Yes

Need more character development
by fovika
June 22nd, 2015, 2:02pm
Rating: 8.0  / 10.0
The main characters (Saaya and Komachi) have nice character arcs, but everyone else is lacking in any sort of character development (which should be the point when dealing with this type of story). Saaya keeps trying to change the world in which she lives, yet no change is found by the end. In all there is little development in the plot (other than the love story). It doesn't even end with a purpose. The manga is lacking in so many areas. It's a nice little read (20 chapters), and the love story is worth it, sorta.

The concept of the plot/world is interesting and works well, but not much happens. I feel like the manga should have had more, but the whole thing is not as impressive as it could have been. And given the beauty of the art, I wanted to like this more. But the mangas main plot point is "changing the way others view text-weavers' summonings/familiars" yet nothing happens with it. It's throughout the manga, yet no change is ever made... Why have that as such a large issue, if you're not going to address it or change it in any way? Makes no sense.

And if you want to debate that the love story is the main plot point, well that's bull, because it's not even in the cards until over half way through the manga. It could have just as easily have been about a blooming friendship between a familiar and it's master (very little in the plot would change by doing this).

All in all it's a beautifully drawn manga, but is lacking in plot development. I'm giving it an 8, because if it had more chapters it could work (and if they dropped the love story).
Was this comment useful?  Yes

Lacking
by mashimaro12345
November 21st, 2012, 11:40pm
Rating: N/A
When I first saw the cover, I thought, wow, this looks great!
Beautiful artwork, interesting plot, full with bishounens and a cute main character plus interesting creatures such as the kirin. What could go wrong with it?
Shallow personalities, such as the main character Saaya who thinks that things should always be perfect and seems to be too nice until it became an annoyance. Somehow she reminds me of Mei from Mei chan no shitsuji. What's with her short hair and the things she says seem to be irrelevant and bugs people off.
Some characters are all cruel with bad personalities, making me not want to read this anymore.
Subsequent chapters after the first chapter turned out to be boring, sometimes confusing and I do hope that the author would just get to the point and make Saaya more likeable please.
Yes, yes everyone looks amazing and the artwork is super, but storyline is very very bad and boring and sometimes even nonsensical.
Try not to read this please.
Was this comment useful?  Yes

The storyline, I personally think is quite creative and original but I am just soooo confused with some parts. Some parts aren't exactly clear and are unexplained, I don't know if the mangaka is doing this on purpose but I think she should just give all detail. I still don't understand what the whole concept about weaving is about and what happened in the recent chapters.

The characters have their own distinct personality and are likeable. But I think the main lead can sometimes be annoying especially with her 'typical shoujo' ideas with everybody 'living in harmony' and 'getting along'. I think she has not shown her full strength yet.

The art is very cute and so are the guys. I don't know but the style to me reminds me of Vampire Knight. REMINDS.

I think this manga has potential, I really do. I think that it just needs to give more detail.
Was this comment useful?  Yes

What's the point of this?
by Usagi~Gurl
May 28th, 2012, 1:56pm
Rating: N/A
Beautiful art, seemingly interesting story. However, I don't see the point in this power called "weaving". She summons Komachi for what? A friend? To do her bidding? The historical summoned figures are all treated as slaves and have no real purpose. The main character, Saaya, I also find to be quite annoying and a bit useless.
Was this comment useful?  Yes

I hope to see more of this author's work... hehehhee...
Bishies<3
Was this comment useful?  Yes

So far...
by mycat8u
May 1st, 2011, 12:24pm
Rating: 7.0  / 10.0
The manga has been progressing pretty quickly. The main protagonists have already begun to be on good terms by chapter 4 and new characters are being introduced almost every chapter. I hope the series doesn't end quickly since it has so much potential!The story is a mix between soul eater and inkheart (a novel) which is really interesting. The art is amazing and very clean. I already love the character designs and how they effortlessly look amazing in each panel. I can't wait fo further releases!